The cannabis industry is doing well during the pandemic, with sales looking strong in multiple U.S. states. Oregon cracked $100 million in monthly marijuana revenue for the first time in May, a 60% improvement from the same period a year ago. Illinois also had a record-breaking month in June, with revenue of more than $47 million, even better than the previous record of…

$44 million set in May. Although recreational pot sales only began there in January, Illinois is already proving to be a hot market for cannabis.

These are only a couple of examples of how well the industry’s doing thus far; other states are also showing impressive growth. And for cannabis investors, that means U.S.-based pot stocks could be about to turn in some impressive results. That makes these two industry giants potentially very hot buys in August when they go to report their earnings.

Green Thumb Industries (OTC:GTBI.F) will release its quarterly results Aug. 12. The Illinois-based company is likely to benefit from not just the terrific growth in its home state, but also from strong cannabis sales across the country. With 48 retail locations spanning several states and licenses for 96 stores in total, Green Thumb is one of the larger marijuana companies in the country.

It’s also versatile, producing its own cannabis as well as operating retail locations. With multiple product brands serving various types of consumers, Green Thumb’s business is diverse and in a great position to benefit from growth from various segments.

It’s already been recording some impressive growth. During its first quarter, Green Thumb’s sales were up by 268% from the prior-year period and 35% from the previous quarter. And those results only covered the period through the end of March, before some states reported record-setting pandemic sales. Green Thumb was also operating 44 stores at the time it released the results, including two stores that opened after Q1.

With more locations open and cannabis sales up during the pandemic, investors should expect to see another impressive quarter from Green Thumb, which could do wonders to propel its stock to new heights. Year to date, shares of Green Thumb are up 40%, well above the Horizons Marijuana Life Sciences ETF‘s (OTC:HMLS.F), which is down 18% over the same period.

Trulieve Cannabis (OTC:TCNN.F) also reports its quarterly earnings results Aug. 12. Although the Florida-based pot producer has footprints in California, Massachusetts, and Connecticut, 53 of its 55 dispensaries are in its home state.

And that’s not a bad thing, given how hot the Florida market is. As of July 24, there were 377,285 qualified patients with active medical marijuana cards in the state. (Florida allows marijuana for medical but not recreational use.) That’s up more than 50% from the 248,380 people with cards a year ago.

The industry’s booming in Florida much like it is in other parts of the country, which is why Trulieve and other cannabis operators in the state continue to add locations. Private cannabis company AltMed Enterprises says it’s been hiring hundreds of employees for its dispensaries in the state; the company is more than double the size it was a year ago.

These are all positive signs for Trulieve investors, demonstrating why the stock — which is already up about 37% year to date — could continue to climb after it releases its next quarterly results Aug. 12.

In its first-quarter results, released May 20, sales of $96.1 million were up 21% from the previous quarter and 116% from the prior-year period. As with Green Thumb, these results only covered through the end of March, when the pandemic was still in its early stages.

Which stock should you buy?

Both of these cannabis stocks are doing well thus far in 2020. To help determine which is the better buy, let’s take a look at their valuations — in particular, the price-to-sales multiples of both stocks: 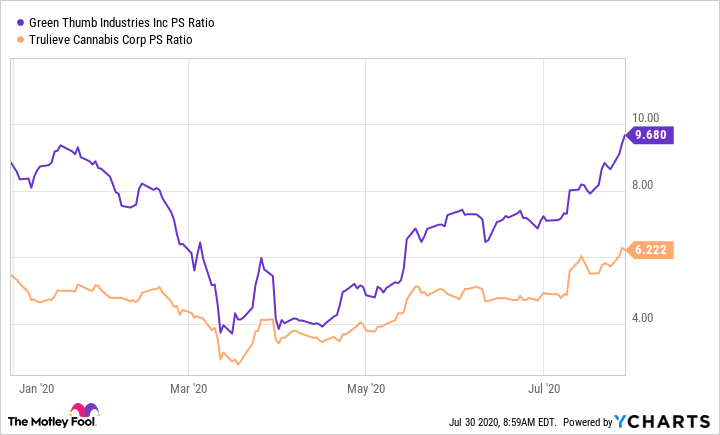