Are you looking for some quality pot stocks to add to your portfolio that aren’t incredibly overpriced and could be due to post some strong numbers this year? Two stocks you won’t want to ignore are…

Cresco Labs (OTC:CRLBF) and Harvest Health & Recreation (OTC:HRVSF). Not only are these companies doing well, but investing in them won’t cost you a hefty premium — they are trading at cheap levels compared to some of their peers.

Both of these stocks are also in great positions to take advantage of some hot new marijuana markets, and investing in them today could set you up for some strong returns in 2021.

Cresco Labs is coming off an impressive 2020. Its sales rose 271% to $476.3 million, and adjusted EBITDA of $116 million came in at more than 24% of revenue.  And despite being a top multistate operator, investors aren’t paying nearly as significant a premium for it as they are for other pot stocks. Here is how it compares to some of its peers when looking at price-to-sales (P/S) ratios: 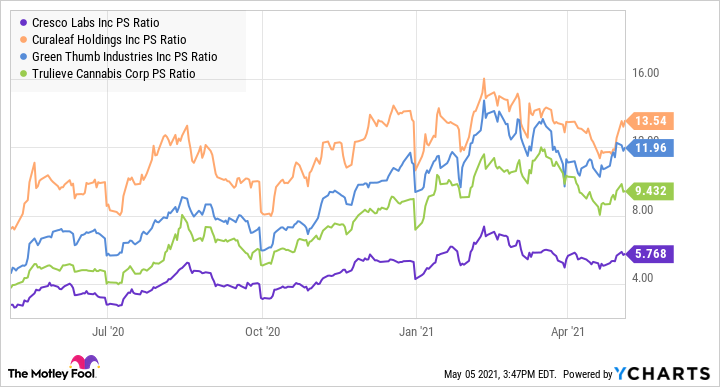 Cresco Labs is already cheap right now, but what’s especially promising for investors is that it could soon become an even better buy. On Feb. 1, its Sunnyside dispensary in Phoenix got the green light from the Arizona Department of Health Services to start selling recreational marijuana. Arizona was one of four states that passed a ballot measure legalizing adult-use marijuana sales in November 2020.

A boost in revenue from its Arizona dispensary is one reason that the quarterly results the company will release on May 27 (for the period up until March 31) could look particularly strong. In April, Cresco also closed on its acquisition of Bluma Wellness, which will give it a strong presence in the hot Florida market, where it will battle for market share alongside Trulieve Cannabis and Curaleaf.

Further down the road, Cresco is also looking to expand its presence in its home state of New York. It currently has four Sunnyside dispensaries there, but after the state passed legislation to legalization recreational marijuana in March, CEO Charlie Bachtell said that the company will “look forward to deepening our position in the state ahead of adult-use sales commencing.”

With strong top and bottom-line numbers and exciting new opportunities in Arizona, Florida, and New York that could propel its numbers even further, Cresco Labs is one of the better pot stocks you can buy right now. What sweetens the deal is its relatively low valuation compared to those of other multistate operators. Shares of Cresco are up 279% in the past year as of May 5 (while the Horizons Marijuana Life Sciences ETF has risen by 59%), but a strong earnings report this month could send the stock up even higher.

Harvest Health trades at an even lower P/S multiple of 4.9. Like Cresco Labs, it too could do well in its upcoming quarter, as this Arizona-based cannabis company recorded its first revenue from the adult-use market in Arizona on Jan. 22. But with 15 locations in the state, it is in an even better position to benefit from what is already one of the hottest pot markets in the country. According to data from Leafly, Arizona generated more than $1 billion in cannabis sales last year, right in line with Illinois and slightly ahead of Michigan. Adding recreational marijuana sales into the mix will only send those numbers up even higher.

The company has also been carefully divesting certain assets in Arkansas, California, and North Dakota. And although investors may see it as a negative to be reducing operations, it can be…

← 3 Marijuana Stocks You Can Buy and Hold for the Next Decade
After an Exceptional 2020, Can This Pot Stock Maintain Its Momentum? →