Aphria (NASDAQ:APHA) and OrganiGram (NASDAQ:OGI) are two Canadian cannabis producers that have struggled over the past year. But with Aphria’s stock down just 35% and shares of OrganiGram plummeting more than 75%, their paths haven’t exactly been similar. OrganiGram’s even done considerably worse than the Horizons Marijuana Life Sciences ETF (OTC:HMLS.F), which is down 60% over the same period…

Let’s take a closer look at these two stocks to see whether the larger decline in price makes OrganiGram a better value buy, or if the divide between the two pot stocks will become even larger this year.

Can OrganiGram turn things around?

When OrganiGram released its second-quarter results on April 14, the results just weren’t good. Not only was net revenue of 23.2 million Canadian dollars down 13.7% from the prior-year period, but the company’s loss deepened as well, from CA$6.4 million to CA$6.8 million.

The one positive for investors is that the company is diversifying. In Q2, OrganiGram reported that cannabis 2.0 products, including chocolate and vape pens, accounted for 13% of its net revenue. In the prior-year period, they didn’t contribute to the company’s revenue at all, as the new segment of cannabis edible products only began hitting store shelves in December.

OrganiGram’s wholesale revenue also made up 24% of its revenue, and that too was 0% a year ago. But despite all the diversification, it still wasn’t enough to get the company’s numbers up, and that’s concerning as it means its existing segments are struggling. OrganiGram blamed the lower sales numbers in Q2 on flower and cannabis oil volumes being down. If the company was already showing signs of struggling to generate growth even before the pandemic, that doesn’t bode well for future quarters.

An added risk for investors is that OrganiGram may not have the luxury of time on its hands. As of Feb. 29, OrganiGram had CA$41.1 million in cash and cash equivalents. That’s a problem given that the company burned through more than CA$25 million over a six-month period leading up to the end of February.

Even if OrganiGram can generate growth, it may end up running out of time if it can’t improve its rate of cash burn. In April, the company announced it was temporarily laying off 400 workers, which should help stop some of the bleeding but whether it’s enough remains to be seen.

There’s no question that Aphria is a safer buy than OrganiGram. When it released its third-quarter results on April 14, it was the third time in four quarters that Aphria recorded a profit. The company’s net sales of CA$144.4 million were also up 19.7% from the second quarter.

And although Aphria’s used CA$124.4 million on its operations over the trailing nine months, it has CA$515.1 million in cash on its books. There’s little risk that Aphria will run out of money given where it is today, even if its cash burns at a higher rate amid the pandemic.

The key for investors is whether the company will be able to remain profitable in light of COVID-19, but the pandemic will create issues for the entire industry, not just Aphria.

Not only has Aphria performed better in recent quarters, but it’s also a cheaper buy given its level of sales: 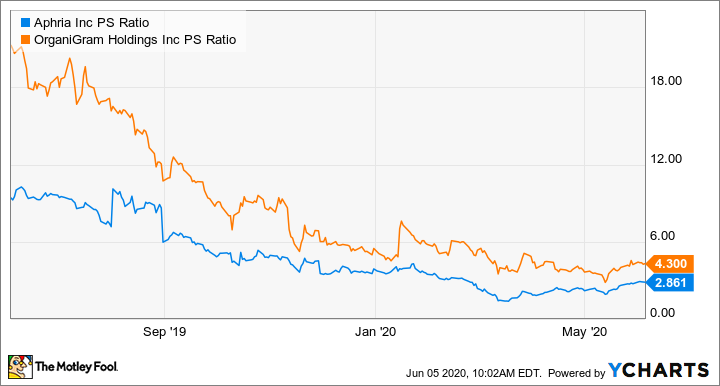 At a more modest multiple of price-to-sales, better sales and…

← Aurora Cannabis: 3 Things That Must Happen for Investor Trust to Be Rebuilt
3 Beaten-Down Marijuana Stocks That Are Stronger Than They Look →