Ontario-based pot producer Canopy Growth (NYSE:CGC) has struggled over the past year, with its share price down about 55%. The only consolation for Canopy investors is that the Horizons Marijuana Life Sciences ETF (OTC:HMLSF) has performed even worse during that period, falling by more than 60%.

But there is hope that this company…

which is often seen as the industry leader, could turn things around this year. There are several reasons to be bullish on Canopy Growth’s stock in 2020, and why it could rise in the coming months.

The biggest reason I’m bullish on Canopy Growth is that it’s got a new CEO in charge this year: David Klein, who came over from Constellation Brands (NYSE:STZ). The beer company is a key investor in Canopy Growth, and earlier this month it upped its stake in the pot producer to 38.6% after exercising warrants.

Being optimistic about a new leader is no disrespect to Bruce Linton, either; Canopy Growth’s former CEO built the company up into the big-name pot stock that it is today. But Klein was a CFO at Constellation, and as a finance-oriented guy, he’ll focus on pruning the company’s expenses and making it a more investable company.

And cutting costs is what he’s been doing of late. In April, the company laid off 200 of its retail workers and announced that it would be scaling back some of its international operations in an effort at streamlining. These changes will help save money and strengthen the company’s financial health — which leads into an important reason why the stock could soar this year.

2. Canopy Growth’s financials could look a lot stronger in 2020

Profitability in the industry is key, not only to appeal to investors but to make operations sustainable, which is particularly important during COVID-19.

While Canopy Growth had more than 1.5 billion Canadian dollars in cash on its books as of Dec. 31, it doesn’t want to be burning through all that money. And with the moves Klein’s been making, there’s reason to be optimistic that not only will the company’s cash flow improve, but it’ll get closer to breaking even as well.

In the company’s third-quarter earnings, released Feb. 14, Canopy Growth incurred a loss of CA$124.2 million. It has now been in the red in seven of its past eight quarters. It’s also burned through cash from its day-to-day operating activities in each of the last 10 quarters.

But investors should expect to see some improvement in the pot producer’s financial statements this year as a result of the moves Klein’s been making. The one caveat, however, is that COVID-19 could negatively affect the company’s sales, which would likely weigh down Canopy Growth’s overall performance.

When the company releases its fourth-quarter results Friday, investors may start to see some early signs of the company’s progress.

3. The stock’s at a more reasonable valuation

Canopy Growth’s stock is nowhere near its 52-week high of more than $45 a share. And that’s a good thing for investors who invest in the stock this year. With the stock trading at about 22 times its sales, it has a much better valuation than in the past: 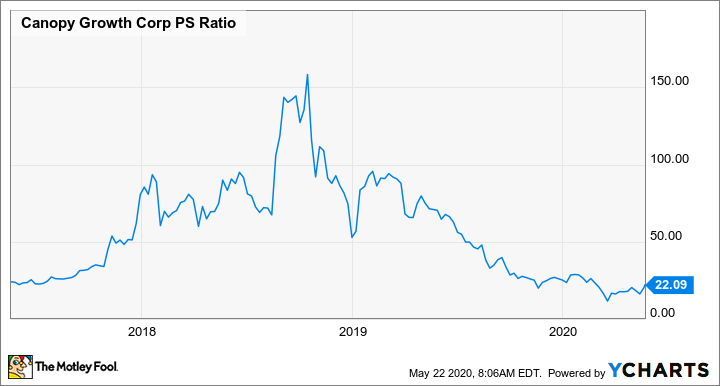 Its price-to-sales ratio suggests the stock is a bargain compared to where it’s been trading over the past three years. While there’s the potential that it could continue to fall given the volatility in the sector, the stock’s definitely much better positioned for a rally today than it was a year ago, when it was trading at well over 50 times its sales.

4. Canopy Growth’s a safe buy in a risky industry

Whether it’s due to COVID-19 or just a lack of cash, investors could see…

← Why are Shares of Aurora Cannabis Sliding Lower?
Why Canopy Growth Stock Is Crashing Today →