Ladies and gentlemen… gold is back.

That’s right, the yellow metal is up $100 in the past month, and it’s up over 20% since its August lows of last summer.

But perhaps even more important is the new global record of $13 trillion in negative-yielding sovereign bonds.

Never in 5,000 years of history – until now – have sovereign bonds paid negative yields.

Yet gold is reacting the way it always has, attracting investors as they seek shelter from economic and geopolitical storms.

And that has the metal of kings looking very shiny indeed…

Gold Absolutely Thrives in This Environment

As expectations have risen for a July Fed rate cut, investors have been piling into bonds. The 10-year Treasury yield has just fallen back below 2%, its lowest in over two years.

Remember, even if inflation is tame but bond yields drop, it encourages a negative real-rates scenario. This is an ideal situation for gold. 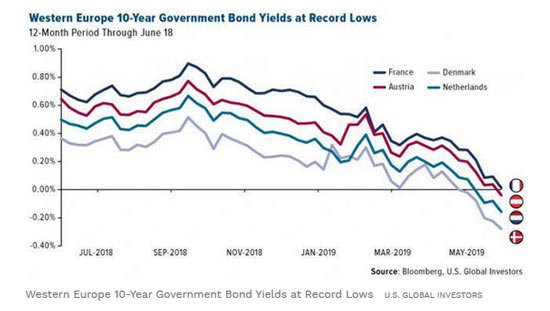 Why would especially sophisticated institutional investors, with billions of dollars to place, buy bonds with negative yields?

Although it’s somewhat counter-intuitive, it does make sense. You see, many of these investors have large amounts of cash to protect. And regular bank accounts only offer so much safety. For example, FDIC insurance only guarantees $250,000 per U.S. bank account.

So large amounts of cash are often used to purchase shorter-term Treasuries. These are considered extremely safe, as they are backed by the federal government and mature relatively soon.

In fact, large investors have so much cash to protect, they’re willing to receive back slightly less than they invested.

On the other hand, some investors expect even lower negative rates. So they buy these sovereign bonds, betting they will gain in value, which will drive their yields lower still. This is another reason there’s so much demand even for negative-yielding bonds.

Still, the bottom line is that the lower these yields get, the more attractive gold becomes.

You see, gold itself doesn’t provide a yield. So if some of the safest Treasuries can at best promise to give you back most (rather than all) of your money, gold starts looking better and better.

And that’s a second major reason gold has taken off. Notice how on this chart, as the worldwide total of negative-yielding sovereign bonds started a huge climb last September, gold decided to follow right along.

Over the past six years, gold has tried multiple times to break through overhead resistance around $1,360.

It was like an impenetrable ceiling. Impenetrable, that is, until now.

All it took was for enough bulls to give up and for the right conditions to arrive.

One way to play higher gold can be through junior miners. Admittedly, they are a much higher-risk play on the sector, so investors are wise to commit smaller amounts spread across a number of companies.

Here are my two favorite junior gold mining plays that are poised to benefit from a climbing gold price.

Lion One Metals Ltd. (OTCMKTS: LOMLF) is a Canadian development and exploration company. Its flagship project is the Tuvatu Gold Project in Fiji, a 100%-owned, high-grade, low-cost underground mining startup.

Lion One was founded by Walter Berukoff, a mining entrepreneur with multiple previous successes that were sold to large mining companies. Although the company’s market cap is just $50 million, the Tuvatu gold mine is a doozy.

The mine plan is to produce for about six years at a rate of about 350,000 ounces of gold per year. Since the grade is high at 11.3 grams/metric ton, Lion One expects to be able to mine for an all-in sustaining cost of just $778 per ounce of gold.

At a $1,300 gold price, that translates into a 62% internal rate of return on the project, and a net present value (5% discount rate) of over $108 million. That’s double the company’s current market cap.

What’s more, all the results to date are from near surface, with less than 10% of the system even having been drilled off so far. The company’s technical advisor, Dr. Quinton Hennigh, is an economic geologist and recognized expert in alkaline gold systems like Tuvatu.

Commenting on the prospects of this project Hennigh said, “Given that only a very small volume of the overall system has been explored, I see excellent potential for growth at Tuvatu.”

Higher on the risk scale – and with just $5.6 million in market cap – Peloton Minerals Corp. (OCTMKTS: PMCCF) is a nano-cap junior gold explorer. But it’s got the right people looking in the right places with the right partners.

Peloton has three core projects in Nevada: Independence Valley, Golden Trail, and Texas Canyon, all in Elko County, Nev. This is important for a number of reasons.

Nevada is home to some of the largest gold mines in the world. If Nevada were a country, it would rank as the world’s fourth largest producing nation. Additionally, Nevada ranks as one of the most mining-friendly jurisdictions on the planet.

Independence Valley is on the famous Carlin Trend and is just 29 miles south of Newmont’s Long Canyon Project (acquired by Newmont in 2011 for $2.3 billion). It’s within the historical Spruce Mountain mining district, once host to numerous base and precious metals mines since the 1840s.

The project is a joint venture with Kinross Gold Corp. (NYSE: KGC), an impressive feat which speaks volumes about this project’s potential. Kinross can earn up to 75% of the project by spending $4 million within six years.

Texas Canyon is about 4.4 miles west of Golden Trail, and a new technical report is being prepared to outline the gold and silver Carlin-style potential of the project. Texas Canyon should see geophysical and surface field work this summer.

Peloton’s fourth main project is Silver Bell & St. Lawrence, which host two past producing gold-silver mines in Montana. A joint venture with Frederick Private Equity Corp. allows them to earn up to 75% and will see drilling this summer as well.

Peloton’s business model is to acquire high-potential projects and advance them to attract either joint ventures or outright sales to larger miners. Being a junior exploration-focused company means higher risk and higher volatility. But even a small allocation could pay off in a big way.

With dovish central banks as far as the eye can see and new records in negative-yielding bonds, gold has officially returned to rally mode.

And that’s sure to drive the companies that produce and explore for the metal of kings.

America’s No. 1 Pattern Trader Is Kicking Off a LIVE Training Program (with a Shot at $160K)

This is not what you would typically see from Tom Gentile… and it’s unlike anything we’ve ever done before.

This is a simple, powerful way that you can put ALL of Tom’s trading power in YOUR hands.

He’s hosting his first-ever live training program… and it’s the only way you can start making money exactly the way he does it.

Based on his performance this year, you could pocket $160,000 from what you’ll learn – in eight weeks flat.

All the details are here.

← As Oil Prices Fall, Here’s What You Need to Do Now
Pot Stocks Former Canopy Growth Co-CEO Bruce Linton Thinks You Should Buy →