After a wild ride last week, investors have an increasingly optimistic outlook for the price of silver. And for good reason.

You see, the 2018 World Silver Survey by the Silver Institute was just released, and it’s immensely positive for the silver market.

According to the Silver Institute, global demand for silver is growing at a ravenous pace, rising to its highest level in five years. 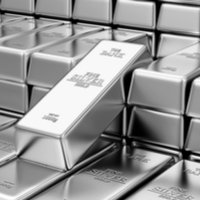 And this trend shows no signs of slowing down. In fact, it could be the catalyst that sends the precious metal soaring.

I’ll show you exactly how high it can run in my latest silver price target in just a bit.

But before we look at the explosive figures in the silver survey, let’s take a closer look at silver’s price action over the last week…

A Rollercoaster Week Puts the Price of Silver In the Black

On Wednesday (April 11), silver locked in a 0.6% gain after U.S. President Donald Trump threatened military action against Russia in response to Syrian chemical attacks. Silver stocks alone saw a 1% jump in response to the president’s news, while the Dow Jones gave up 1%.

Despite Wednesday’s gains, Thursday (April 12) saw silver give back gains as the White House walked back the president’s comments. While the U.S. Dollar Index (DXY) and stock indexes saw significant increases, silver lost ground, breaking even on Wednesday’s gains.

Take a look at how the DXY jumped on Thursday… 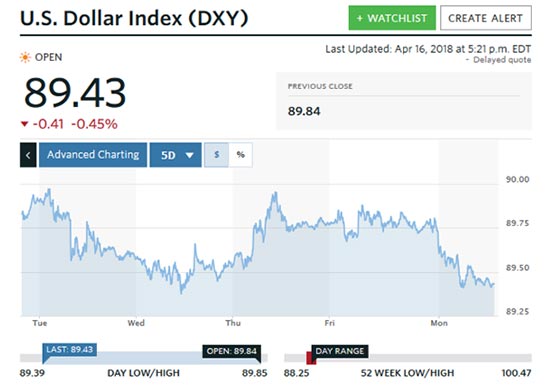 And you can see a similar surge in the S&P 500 on Thursday, too, putting more pressure on silver prices. 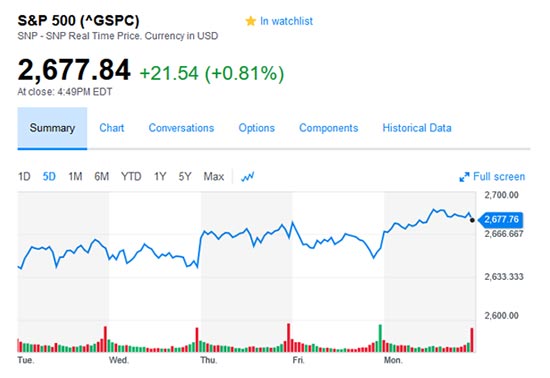 On Friday (April 13), the markets reversed – the dollar consolidated while silver bounced back, gaining what it had lost since Wednesday’s close. On Monday (April 16), the dollar retreated further, to 89.43, and silver closed at $16.64, providing the metal with a gain just shy of 1% to close the week.

While silver’s weekly gain was great, the real news here for the price of silver is the movement of the dollar. You see, the dollar may be entering a consolidation pattern and could be set to move sideways for a while.

You can see this consolidation pattern in the chart below. 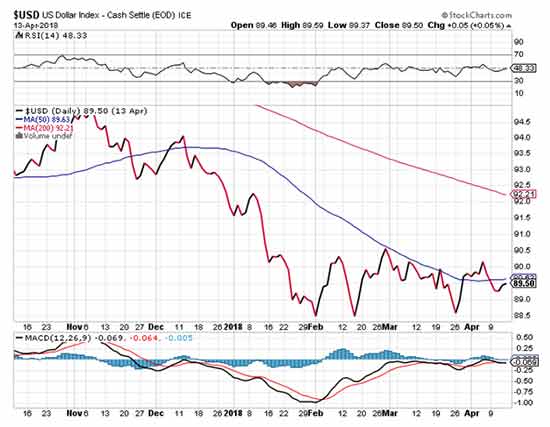 This suggests that the dollar may be entering a holding pattern – great news for silver, which normally sees far more opportunities for a breakout when the dollar turns stagnant.

As for silver itself, we see a triangle pattern that suggests the metal is poised for a significant breakout. As you can see below, silver’s recent action has just pushed the metal above its 50-day moving average. 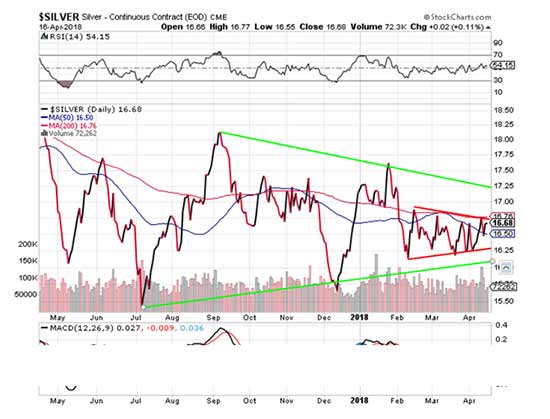 Meanwhile, silver stocks have just pushed above their own 50-day moving average as well, and the RSI and MACD momentum indicators are trending distinctly higher going all the way back to mid-February.

Taken together with the silver survey, both of these trends are setting silver up for strong gains – gains that I believe are right around the corner.

Silver Is on Track for a 7% Gain by Summer

However, these estimates could be low when we factor in the impact of the silver survey.

According to the survey, industrial demand for silver grew last year by 4%, its first rise since 2013. That was boosted by strong demand from the solar panel industry and the production of semi-conductors.

Silver jewelry and silverware demand posted an increase of just 2% over the previous year, with India taking most of the credit for that, accompanied by the United States.

Physical silver investment was down, as coin and medal fabrication fell thanks to lower demand in the United States, Canada, and China. Silver bar demand was also down. But exchange-traded products, like ETFs, saw their holdings rise by 4%.

Overall, fundamentals continue to remain supportive for the metal, and sentiment looks like it may be pivoting toward positive in the relatively near term.

While silver is one of the best hedges against market crashes, I’ve been looking at an even more effective program to protect your wealth during these volatile times…

“Trouble Is Brewing”: According to Bloomberg‘s latest report, America could be heading for an economic disaster that would rival the Great Recession. Billionaire Ray Dalio’s hedge fund, Bridgewater Associates, has made a $22 billion bet against the market. And Citibank calls our present situation “eerily reminiscent of the mortgage crisis.” To see why we believe some of the richest players in the world are preparing for a market collapse, click here.