The company has faced government scrutiny for operating without a license and expanding its operations without official permission. 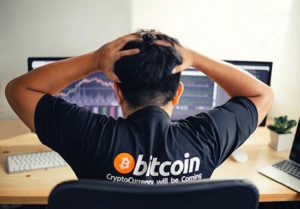 However, Binance CEO Changpeng Zhao took to Twitter Inc. (NYSE: TWTR) to state media outlets have engaged in “irresponsible journalism” on this story.

The CEO says that Binance has been engaged “constructive talks” with the FSA.

He denied that Japan has made any orders to suspend operations.

Nonetheless, the spillover from any potential crackdown is raising concerns that regulatory action will be bad for Bitcoin and other cryptocurrencies.

Now that we know all of today’s price movements, here’s what has been moving these cryptocurrencies…

The top performer in the space was GXChain, which gained 15.14%.

Even though the price of Bitcoin today is down, the cryptocurrency received a bullish recommendation from Twitter CEO Jack Dorsey.

In an interview with The Times, Dorsey said that he thinks Bitcoin will overtake the U.S. dollar and become the top global currency for payments in the future.

Dorsey also suggested that such a shift could occur within the next decade.

Known as the Ethereum of South Korea, ICON surged 60% on March 21 and continued to climb after cryptocurrency exchange Bithumb listed the asset for trading.

Massive trading volumes have been recorded on the nation’s largest cryptocurrency exchange.

Did you know we have a free research service that finds the most profitable opportunities in cryptocurrencies today?

It gives you real-time recommendations and price updates on only the best ways to make money now.

Here’s everything you need to know.

The popularity of ICON has prompted the nation’s second-largest exchange, Upbit, to list ICON as well.

This week, social media companies have been climbing over each other to eliminate advertising tied to the cryptocurrency space.

The bans are coming after warnings from the U.S. Securities and Exchange Commission about the fact that ICOs are unregulated tokens with significantly higher risks.

You’re Still an Early Adopter If You Own Bitcoin

According to a recent survey from Finder.com, just 8% of people – or one out of about 12 – in the United States own cryptocurrencies.

And another 8% plan to purchase it in the future.

This means that about 92% of Americans have not touched Bitcoin or other assets, which suggests that this industry has a long way to go before we reach mass adoption.

I hope you’ll take advantage of all the great research on this breakout digital coin. To find out how to get all this, just take a look.