Bitcoin (BTC) is on the verge of its first back-to-back weekly gains of 2018.

With tax season in the books, analysts anticipate that Bitcoin and other cryptocurrencies will begin to pull out of the doldrums and kick-start a rally in the second quarter. 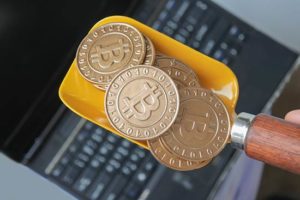 Even though Bloomberg reported that Binance denied the rumors, the thought of how this new trading option would positively impact liquidity in the crypto market helped press prices in the space even higher.

A spokesperson at the company called the reports “fake news,” while its CEO, Changpeng Zhao, said on Twitter Inc. (NYSE: TWTR) that the story was untrue and warned investors to avoid “predictive news.”

Before we get to the other big developments in the cryptocurrency space, here’s a recap of the performance of the top five cryptocurrencies by market capitalization.

Money Morning Insight of the Day

It debuted in March, and it’s been flashing a “buy” signal for weeks.

LIVE ON CAMERA: Watch America’s No. 1 Pattern Trader officially become $1,050 richer in 15 seconds! His secret to becoming a multimillionaire is so easy that anybody can do it. Click here for details…

Money Morning Cryptocurrency Expert David Zeiler breaks down everything you need to know about this new indicator, right here.

Now, let’s take a look at the top cryptocurrency stories from today (April 20)…

The Top Cryptocurrency Stories for Friday

America’s No. Pattern 1 Trader used to be an average Joe scraping to get by. He never graduated from college, and he spent most of his career as a Home Depot customer service rep.

There’s no guesswork involved, and the best part is, it’ll only take you 10 minutes per day!