Bitcoin’s incredible 1,400% surge in 2017 captivated the investing world. But that short-term burst in the Bitcoin price overshadowed a key aspect of its long-term potential…

While the Bitcoin price corrected this year (down 40% in 2018), this Bitcoin chart shows the cryptocurrency is just scratching the surface of its true price potential.

Because the supply of Bitcoin is capped, once all bitcoins are mined, any growth in demand will send prices skyrocketing. Unlike the dollar, no central bank or entity can create more bitcoins to keep the price flat.

Bitcoins are created when digital “miners” solve the complex calculations behind each blockchain transaction. As more bitcoins are earned, they become increasingly difficult to mine, slowing the rate of new bitcoins entering the market.

Most importantly, only 21 million bitcoins will ever be in existence.

That’s hugely important for the future price of Bitcoin, since we are nearing Bitcoin’s peak supply…

Miners have already unearthed 80% of Bitcoin’s total supply, and each new coin mined will take even longer to earn.

Check out the chart below, which shows how many bitcoins have been mined, and how it’s becoming increasingly difficult to mine more bitcoins.

As you can see, there are only… 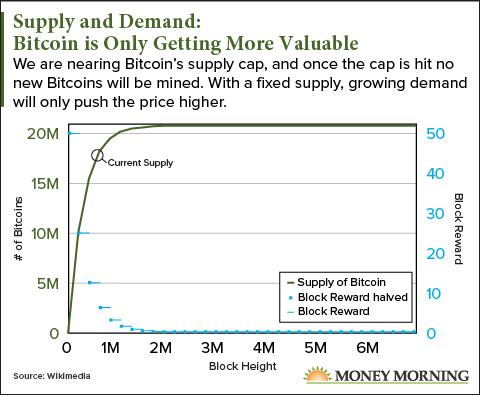 4 million bitcoins left to mine, and the rate of new bitcoins entering the market is slowing. Of course, the scarcer the supply is, the higher the price will be as long as demand remains constant.

That means 2017’s price gains could be a mere warm up for Bitcoin’s future potential once peak supply is reached.

Once all 21 million bitcoins are on the market, any rise in demand will send prices surging higher.

And we’ve uncovered just what could send demand surging. You don’t want to miss this…

Money Morning Defense and Tech Specialist – and cryptocurrency legend – Michael Robinson just revealed the little-known details regarding the future of Bitcoin… and why at any moment, it could be poised for a record-breaking rebound far beyond anything we’ve witnessed already.

Michael made a prediction about Bitcoin way back in 2013 – and folks who followed his advice stood to become 253 times richer. I’d venture to say not one in 10,000 people is aware of the massive profit potential unfolding right now.

About Money Morning: Money Morning gives you access to a team of ten market experts with more than 250 years of combined investing experience – for free. Our experts – who ha