On Oct. 17, Canada legalized recreational marijuana, becoming just the second country in the world to allow recreational cannabis use. 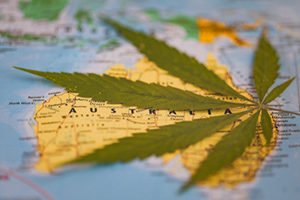 Canada’s legalization policy has widely been viewed as a success, with the nation’s banks and cannabis companies generating $8 billion from marijuana-related investment in just the first month.

In fact, it’s prompted renewed campaigns for legalization across the globe, including in Canada’s commonwealth cousin, Australia.

After years of national prohibition, a new poll suggests that national attitudes toward Australian marijuana legalization are changing – and fast.

But these numbers are likely conservative.

According to a recent poll, 94% of residents of the ACT support the legalization of recreational marijuana use.

These numbers “show that [ACT residents] are overwhelmingly in favor of sensible changes to our drug laws like legalizing small amounts of cannabis for personal use,” said Michael Pettersson, a member of the ACT Legislative Assembly.

While these figures only represent the opinions of residents in the ACT, they’re indicative of the nation’s increasingly positive attitude toward marijuana usage.

A reported one-third of Australians over the age of 22 have used cannabis. That’s roughly 5.8 million people. In fact, it’s estimated that around 750,000 Australians smoke marijuana on a weekly basis.

Growing acceptance has driven both the ACT and Australia’s Northern Territory to decriminalize marijuana use in the last decade.

The move was reminiscent of Canada’s path to legalization – Canada first legalized medical use, and recreational legislation followed.

Australia’s acceptance of medical marijuana opened the door to the immense economic opportunities available in a regulated marijuana industry.

And the robust numbers currently generated by the nation’s domestic medical industry make it possible.

But that pales in comparison to the potential value of the nation’s recreational marijuana industry.

According to recent estimates, Australia’s recreational industry could be worth as much as $8.8 billion within a decade of legalization.

And these numbers could be short of the mark. Australia is currently one of the world’s wealthiest nations, giving consumers the kind of discretionary income that’s often absent in much of the world.

This wealth is likely to translate into lavish spending in any cannabis market that emerges in Australia.

Thanks to Canada’s astonishing success and the significant economic opportunities that come with legalization, it’s likely that Australia will follow in the Great White North’s footsteps and approve recreational usage in the near future.

And that’s going to prove a boon for investors who have access to the sort of cannabis investing research that can uncover new opportunities.

Fortunately, we’ve got you covered.

If you’re interested in cashing in on the global marijuana revolution, then you have to check this out…