But the story – and the profits – are just getting started.

After all, there’s potentially $22.6 billion a year up for grabs.

Let me take you “north of the border” to show you what the big day was really like for politicians, police, cannabis connoisseurs, and investors.

Then we’re going to look across the ocean, and then out to the weeks and months ahead to see the next massive, untapped markets that could go legal soon…

We’ve already talked here about how the number of licensed cannabis stores is low in some Canadian provinces – including zero in Ontario, due to a last-minute switch to privately owned shops instead of province-operated ones, like the “ABC” liquor stores you find in certain states here in the United States.

And now we’re starting to see how, despite all the hype surrounding legalization, not everyone in Canada is fully on board here. In fact, about 41% of respondents to a Forum Research survey disapprove of legalization altogether.

Exclusive Rebroadcast of the First-Ever American Cannabis Summit: Click here to see how to conquer America’s most controversial – and lucrative – industry…

In Parliament, Conservative Party leaders are already threatening to reinstate prohibition if they can grab the reins of power in the next national election.

However, when pressed, Tory leaders hedged, appearing to acknowledge the “uphill” nature of such a fight.

Precisely none of these “bumps” slowed down sales on Oct. 17, though. How could they, really?

By all accounts, cannabis was flying off the shelves, and multiple dispensaries sold out on day one.

Only a handful of provinces released the first-day revenue. For Alberta, Prince Edward’s Island, Nova Scotia, and one Manitoba retailer that reported, sales totaled about US$2 million.

Now, these provinces are sparsely populated compared to places like British Columbia or Quebec, where 10,000 and 42,000 sales, respectively, were reported – that’s for both stores and online.

One credible analysis I saw estimated nationwide sales to reach upward of $10.8 million on Oct. 17.

Cannabis legalization isn’t sending Canadians who wouldn’t otherwise partake in using marijuana to dispensaries, according to the Forum Research survey I cited earlier. Of the 53% of Canadians who report never having smoked marijuana, only 11% reported that they may try it now that it’s legal.

Of course, the 47% who do imbibe are thrilled they can now do so legally.

“Every day I smoke it anyway, normally. Now, we don’t have to worry about getting in the trouble with the law. Which is nice,” John Edwards, a New Brunswick resident, said as he waited outside a local dispensary to pick up some marijuana. “No driving for anyone! Just stay at home – and smoke weed at home.”

After a fairly heavy national media blitz advising folks not to take cannabis and drive in the run-up to Oct. 17, Canadian police have already started cracking down on driving while high. Within an hour of legalization going live, one Manitoba resident was issued a CA$672 (US$511) fine for such an offense.

Later that afternoon, the Winnipeg police tweeted out a warning to local cannabis consumers: 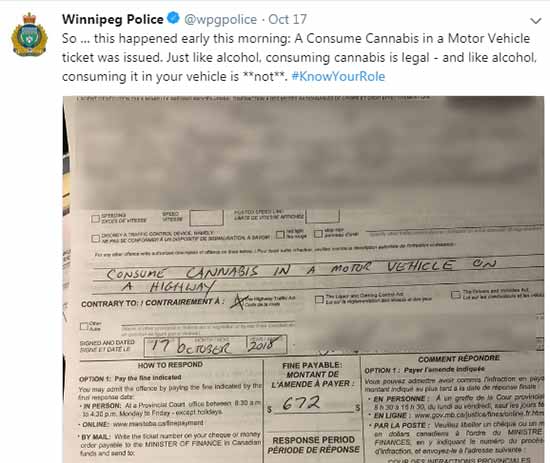 So, it’s clear there will be some road bumps along the way, though, just as there always are when it comes to revolutions, but if this is the worst that happens – as seems to be the case – cannabis has a big, bright future in Canada.

These Are the Next Countries I Expect to Go Legal

Canada was the second nation in the world to legalize recreational adult-use marijuana, only trailing Uruguay, where then-President Jose Mujica signed legislation to legalize cannabis in December, 2013.

With the excitement – and the money – surrounding the new law, it’s no surprise that other countries are looking to join in.

Since 2009, Mexico has decriminalized small amounts of marijuana, and in 2015, court rulings began laying the groundwork for full legalization.

The country’s incoming interior minister, Olga Sanchez Cordero, participated in these rulings during her time on Mexico’s National Supreme Court of Justice. I think that means Mexico will be the next big nation to go fully legal.

Special Rebroadcast: John Boehner just revealed why he’s going ALL IN on marijuana… and exactly how ordinary Americans can make a fortune from this hundred-billion-dollar industry. Click here to watch…

“Canada has already decriminalized, as well as almost half of the states in the United States. What are we thinking? Why are we killing ourselves when North America and many European countries have already decriminalized?” Sanchez Cordero said in an interview toward the beginning of July, referencing the infamous war on drugs that started over a decade earlier.

Wait – If you’re like most Americans, you probably think cannabis is already fully legal for the Dutch…

But that’s not quite true… yet.

It’s certainly true that the Netherlands takes a very soft, tolerant approach to cannabis; the nation’s “coffee shops” are world-famous spots where tourists (and, it’s worth noting, more than a handful of Dutch citizens) can buy small amounts of weed and toke up hassle-free.

But take that spliff a few feet outdoors into the street, and not only will you get frosty stares from locals, but any cops who happen to be passing by will advise you to put it out – though by law, they won’t be able to arrest or prosecute you for “personal use.”

Yes, though it’s tolerated (“gedogen” as it’s famously known in Dutch) and decriminalized in small amounts, cannabis actually remains illegal in the Netherlands. And over the past decade or so, a more conservative approach to governance has meant scores of “coffee shops” have had to close their doors.

But now, the nation is looking to implement a trial program that will license a marijuana provider in six to 10 Dutch cities. And I think that means it could be the country to follow Mexico in this legalization train.

In late 2016, a new Italian law legalized the production of hemp, a low-THC version of cannabis. While it is mostly used for industrial purposes, the dried flowers have been sold in some shops.

And now, a marijuana legalization measure has been making its way through the Italian Parliament.

South Africa has legalized use and growth of personal consumption, but only in private. And it’s now starting to look at more liberal measures, meaning it could be the first African nation to go fully legal.

Canada’s legalization has had a worldwide effect – and that’s not an exaggeration.

While the United States may be dragging its feet on nationwide legalization, other highly populated, rich nations are charging forward.

How to Conquer America’s Most Controversial – and Lucrative – Industry

He was once marijuana’s biggest enemy… but now, former Speaker of the House John Boehner is advising Americans to go “ALL IN” on cannabis. To see his entire shocking prediction, click here.