The wave of cannabis legalization in Canada and numerous U.S. states is about to generate huge windfalls for a handful of companies.

Thanks to a key acquisition late last year, Constellation Brands Inc. (NYSE: STZ) is one of those companies.

Constellation is already one of our favorite beverage stocks. You probably know this Fortune 500 company’s beer brands, like Corona and Negra Modelo, as well as its wine and spirits that include 7 Moons and Nobilo wines and Svedka vodka.

It won’t be long before some brand-new moneymaking products will be joining that family.  But even before we get to this newest catalyst, now’s a great time to buy STZ. A recent overreaction by the market has just put the stock on sale.

STZ shares slipped 8% after earnings came in below expectations in late June. But that knee-jerk reaction misses a few key factors that will make this stock a winner for years to come.

The biggest reason for the “disappointing” report was a sharp increase in marketing spending, as well as spending to boost production capacity in Mexico to meet demand for its most popular brands there.

In spite of the short-term setback, Constellation still expects to…

meet or beat expectations for the year.

Introducing new products and expanding into new markets always comes with up-front costs. But it’s also the only way to take advantage of new profit opportunities.

Renegade Investment Expert: “It’s time to double down – or even triple down – on your cannabis investments!” Read more…

Constellation has not been shy about taking that leap, which is why it’s a great long-term bet, regardless of this minor hiccup.

And its next leap is going to make it a first mover in one of the fastest-growing trends of the next decade.

Constellation Brands Has the Potential to Dominate a $14.9 Billion Industry 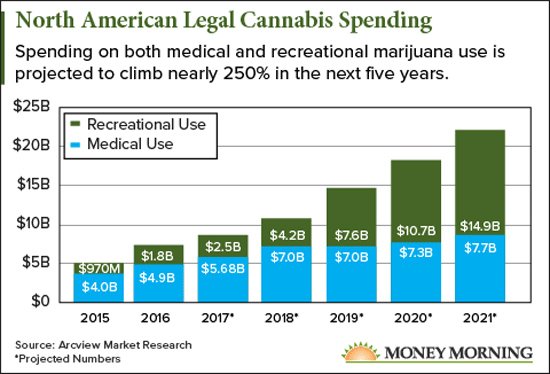 Canopy had been primarily concerned with medical marijuana up to that point. But this partnership paved the way for cannabis-infused beverages. And these products are currently in the works.

Canada passed its first wave of recreational marijuana legalization in June, and the government indicated cannabis beverages will be legal in the near future. A few brands of beverages have appeared in states like Colorado and Nevada, but producers are still working to find the formulas that will catch on with consumers.

That’s a huge potential market for Constellation and Canopy. Dispensaries in California, for example, have already reported that cannabis legalization has moved demand away from smoking and toward easier and more precise options like edibles and vape cartridges – which are more viable in a legalized market.

Beverages are a logical next step for a number of reasons.

First, they are simply a more familiar option to many people. A Canadian government survey showed that 77% of adult residents drink alcohol, but only 17% smoke.

And unlike alcohol, cannabis is calorie-free, giving drinkers an alternative that won’t contribute to weight gain. (Researchers are currently working out ways to eliminate the infamous “munchies” experienced by some marijuana users.)

Plus, cannabis doesn’t cause hangovers.

So Constellation and Canopy have a chance to attract not just cannabis users looking for new consumption methods, but also drinkers who want the kick without the side effects.

That’s probably why the alcohol industry has been fiercely opposed to cannabis legalization for so long. But Constellation made the forward-thinking move of not fighting the inevitable and cashing in on it instead.

To give you an idea of the growth prospects for this business, the latest edition of ArcView Market Research’s “State of Legal Marijuana Markets” report projected spending on recreational marijuana in North America will grow from $4.2 billion in 2018 to $14.9 billion by 2021.

The companies that establish a dominant presence in this market are going to reap huge rewards. Constellation and Canopy together are strong candidates to lead the pack.

The Constellation-Canopy Merger Puts the Cannabis Industry in the Spotlight

It’s hard to go wrong with either Constellation or Canopy. Both are set to deliver big gains in the coming years.

In spite of its overall fantastic performance, Canopy has slipped from a high of $36 in late June to a little over $24 on July 20.

That’s the nature of stocks in emerging industries: Rapid growth may be tempered by short-term periods of investor fear, rational or not.

Click here to see all of our top-rated stocks, and you’ll automatically get free updates on our top stocks, based on our proprietary rating system, the Money Morning Stock VQScore™.

Still, Canopy is much less risky than most. Five out of eight analysts tracked by FactSet call it a “Buy.” And since it became the first cannabis stock listed on the New York Stock Exchange in May, it’s been rightly called the “blue chip” of pot stocks.

Of course, if you want a stock with even more blue-chip credibility – and one that also stands to gain from cannabis legalization – Constellation Brands is an ideal choice.

With its $41 billion market cap, Constellation brings legitimacy and stability to the cannabis industry. The company has increased its earnings per share every year since 2013, including a 29% boost in its most recent fiscal year.

And that was before it joined the marijuana “Green Rush.”

While smaller enterprises struggle to find their footing in a new, regulated industry, Constellation will be able to leverage its existing relationships and corporate infrastructure to expand a business that already pulls in more than $7.5 billion per year.

And in spite of its minor drop after its last earnings report, Constellation clearly still commands respect from Wall Street. According to FactSet, 16 out of 19 analysts rate STZ a “Buy” or “Overweight,” with price targets as high $288. That would be a 34% increase.

All of this is what prompted Keith, who once said he would never invest in pot stocks, to change his mind.

Constellation, along with its new partner Canopy, provides a great opportunity to catch that wave.

This means investors have a once-in-a-lifetime chance to make hundreds of thousands – if not millions – of dollars from Canadian marijuana companies.

But history is unfolding at this very moment – and even a few hours’ delay could cost you a shot at the biggest possible gains.

You need to see how to take advantage of this immediately.