By now, you’ve heard about Facebook stock’s incredible one-day, $120 billion collapse on July 26. But you might not know one expert warned investors just before it happened…

“I would not buy Facebook and here’s why: I think the litigiousness of that stock is not attractive. It’s a bet that’s not calculated,” Keith told host Stuart Varney. “I think they’re going to get caught short somewhere down the line here, and I don’t want to be a part of that.”

In fact, Keith has been bearish on Facebook for a while, calling it a “bug in search of a windshield” several times since the Cambridge Analytica data scandal broke.

And that’s exactly what happened…

The stock plunged nearly 20% on Thursday morning, as fleeing shareholders abandoned the company after its disastrous earnings report.

Take a look at just how drastic the sell-off was compared to the biggest sell-offs ever. 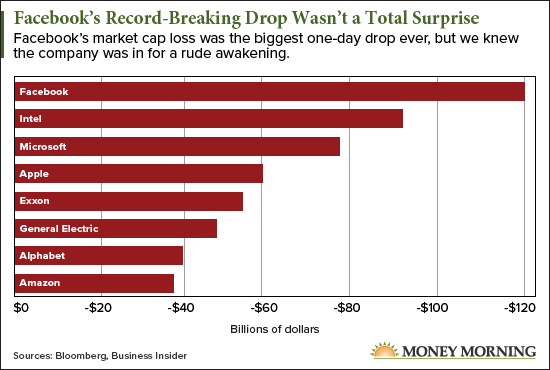 It’s safe to say Keith nailed his prediction for Facebook, but he says it gets even worse for the social media giant.

It’s a too-good-to-be-true company Wall Street will hype until the end – and keep raking in your hard-earned money while doing it.

Keith is a completely independent market analyst, which sets him apart from the typical Wall Street hacks. He simply doesn’t have the conflicts of interest the Wall Street suits do.

And Keith knows all about how they’re gaming the system in their favor. His work helped them do it…

Keith spent years identifying complex patterns in the markets, using them to legally “skim” billions of dollars in profits every single day – for entire nations, wealth funds, and massive corporations.

He was part of the team behind the curtains pulling the strings. More so than any politician or president.

His work was even guarded under military-grade security.

He’s breaking Wall Street’s “code of silence” and exposing its most powerful weapon to show individual investors how to use the same type of tools Wall Street does to create billions and trillions of dollars of wealth.

But it won’t last for long.

← Which is the Better Marijuana Stock? Aphria vs. Supreme Cannabis
This Could Send Oil Prices to $400 a Barrel by 2020 →