One tweet and the crypto universe was buzzing about the possibility of a Bitcoin ban by way of an executive order from U.S. President Donald Trump. 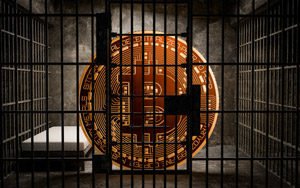 This particular tweet wasn’t sent by the president, though.

It came from Tom Lee, co-founder, managing director, and head of research at Fundstrat Global Advisors. Lee is a conventional Wall Street analyst with a strong interest in cryptocurrency, especially Bitcoin. He appears often on CNBC to make bullish Bitcoin predictions.

His “Bitcoin ban” tweet was prompted by the news that the Trump administration would ban flavored e-cigarettes via the Food and Drug Administration (FDA).

Lee posted a link to a CNBC story about the e-cigarette ban on Twitter with this commentary:

“This is un-related but shows White House can issue an ‘executive order’ banning anything. And could even ban bitcoin. Not expecting it. But with current White House, there is ‘nothing out of bounds nor out of reach.'”

The Cryptocurrency Everyone Else Will Regret Not Owning: To see Tom Gentile’s No. 1 crypto pick and exactly how to trade it, click here now.

The situation got crazier later in the thread when someone using the handle “C.C.Catch” commented, “100%. If btc reaches 100k today, I believe it’s likely Trump will ban it.”

That was all it took to launch several articles on crypto news sites speculating on whether President Trump will ban Bitcoin when it reaches $100,000.

That leaves us with two questions:

Technically, Lee has a point in that Trump could use his executive authority to declare a ban on Bitcoin. But that’s easier said than done.

Unlike a physical product sold by retailers, as is the case with e-cigarettes, Bitcoin is a decentralized cryptocurrency. There is no central authority to shut down.

Trump could shut down U.S.-based exchanges such as Coinbase, Kraken, and the Winklevoss brothers-owned Gemini. But he can’t do anything about foreign-based crypto exchanges, many of which accept U.S. customers. It would also be very difficult to stop individuals from buying and selling Bitcoin to each other using Finland-based LocalBitcoins.com.

So a Bitcoin “ban” would make it less convenient to trade Bitcoin, but not impossible. And individuals holding Bitcoin in their digital wallets would prove tough to track down.

Why a Bitcoin Ban Is Unlikely

President Trump is on the record as having his doubts about crypto. In July he tweeted:

“I am not a fan of Bitcoin and other Cryptocurrencies, which are not money, and whose value is highly volatile and based on thin air. Unregulated Crypto Assets can facilitate unlawful behavior, including drug trade and other illegal activity….”

Still, I don’t see Trump enacting a Bitcoin ban. It would be difficult and costly to enforce with few – if any – actual benefits.

But there would be economic harm to the startups using Bitcoin and developing the technology. And the financial industry, which has begun to adopt Bitcoin as digital gold, would be none too pleased.

Just the talk of a ban would tank the Bitcoin price, creating huge losses.

Imagine the howling from major investors who have sunk millions into Bitcoin. And such investors are more common than you think.

Rui Carvalho, the Global Head of Product Management for Connectivity and Feeds for Intercontinental Exchange (ICE), said at the Consensus 2019 conference in New York that 20% of institutional investors already have money in crypto.

And according to a study by Global Custodian, a trade magazine that covers the international securities industry, 94% of endowment funds said they had made some form of crypto investment in the previous 12 months.

Why blow up these investments? Why throw a monkey wrench in the advances that crypto promise to bring not just to the financial world, but to areas like supply chain management?

I can think of plenty of drawbacks of a Bitcoin ban. But I can’t think of a single benefit.

And I don’t see a strong motive that would drive President Trump to ban Bitcoin. We know why Trump keeps dropping tariffs on China – he thinks he can win the trade war. But a Bitcoin ban would serve no purpose.

Frankly, I wouldn’t worry about it.

When Neil Patel launched the Angels & Entrepreneurs Summit, he had only planned to invite a small group of guests to join him and guest “Shark” Robert Herjavec… but then Neil revealed something truly shocking.

← Are these 4 pot stocks bargains or value traps?
Buy These 3 Marijuana Stocks, According to Wall Street →