Gold prices took a hit at the end of last week. But now isn’t the time to worry. It’s entirely normal in the wake of a rate hike, and we know higher rates are a long-term catalyst for the price of gold. Plus, rising economic uncertainty will send traders flooding into gold…

Things played out in the gold and dollar markets pretty much as expected last week when the U.S. Federal Reserve raised interest rates.

The Fed raised rates by 0.25%, as expected.  Simultaneously, the dollar popped and gold dipped temporarily.  And then they both reversed, allowing gold to head back above the crucial $1,300 level.

While many are focusing on the Fed’s dot plot that suggests decent odds of a fourth hike this year, looming trade wars should command more attention.  The European Central Bank followed on, saying it would end its QE program this year while promising no rate hikes for at least a year.

Massive Upgrade Could Send Bitcoin to $100,000 – Click Here to Learn About the Opportunity That Could Deliver a Million-Dollar Payday to Investors Who Act Now

After the first salvo from Trump on foreign steel and aluminum, America’s trading partners have started retaliating.  Even down to the municipal level, groups are looking for ways to avoid “buying American.”

The bottom line is there are no winners in this scenario.  Life will get more expensive for everyone, and gold stands to benefit.

While this last week was brutal for gold traders, it’s setting the stage for a gold price boom…

Gold began trading on Monday of last week (June 11) able to garner a decent $6 rally that allowed it to close at $1,300 even.  But the pending Trump-Kim summit in Singapore overwhelmed the metal the next day.

As that summit went relatively smoothly with a positive outcome, even though it was light on details, gold prices backed off as tension eased.

As we approached the Fed’s interest rate hike on Wednesday (June 13), the U.S. Dollar Index (DXY) weakened to 93.6 and then jumped on the Fed’s hawkish outlook.

And while the DXY responded to the rate hike, what it did on Thursday (June 14) was much more drastic… 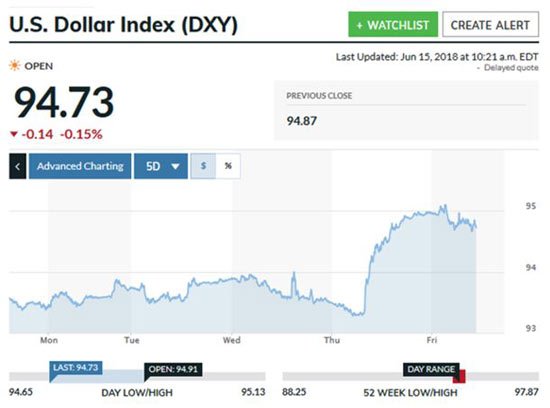 The DXY popped back above 94 early Thursday and then soared to test 95 by 5 p.m. as the markets digested news that the European Central Bank would end its $3 trillion bond-buying program by the end of this year.

That seems to have hurt the euro, which dropped 1% against the greenback. But the interesting part is gold pulled back from a $1,310 high but remained solidly above $1,300 around $1,304, despite a relentless climb in the dollar.

Then on Friday morning (June 15), the price of gold collapsed…

The DXY retreated from as high as 95.12 in early trading to open at 94.80 on news the United States was slapping $50 billion of tariffs on Chinese goods, with the Chinese promising swift retaliation.

But gold wasn’t the only commodity to suffer.

Silver joined in as well, along with oil, copper, and a host of other raw commodities. By late afternoon, stocks had recovered from their lows but didn’t reach back into positive territory.  Oil had lost 3.6%, but the DXY was up a smashing 150 basis points from its Thursday low at 93.3 to 94.8.

But don’t worry. The price of gold’s plunge is expected after official rate hike announcements, and I think it’s only setting the stage for gold to reach my price prediction.

After all, gold continues to be one of the safest assets on the planet, and things are about to get even worse…

Why Owning Gold Will Become Even More Important

Owning gold has historically been a safe-haven asset for investors fleeing risk and insecurity elsewhere.

And global economic risk is getting shoved into overdrive…

This is easily my favorite quote from recent days:

“Here we are doing something that almost seems like a suicide mission,” Jeff Gundlach said in a recent webcast regarding his DoubleLine Total Return Bond Fund. “We are increasing the size of the deficit while we’re raising interest rates.”

Imagine that, increasing rates on a growing debt. That sounds like a recipe for disaster, with bonds likely to accelerate their bear market.

And U.S. protectionism has already triggered tit-for-tat responses from its trading partners, forced to retaliate in order to look strong at home.  Goods and services will get more expensive everywhere, and this could easily trigger a serious bout of inflation.

One thing is for sure, the markets don’t like it.  On Friday, the Dow was off over 200 points at its worst.

But as you wallow in gold’s post-Fed correction down to $1,280, remember that gold tends to make a seasonal low right around now, mid-June.

From there, it usually drifts slightly upward into late July. But this year’s post-Fed drop combined with a seasonal low just might mark a strong turning point. 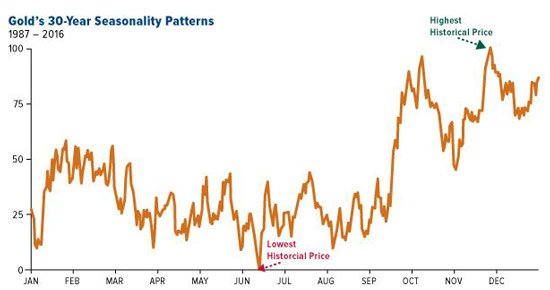 The dollar’s boost from a faltering euro may have legs, but at worst I think that gold could begin rallying along with the dollar if the greenback holds up. 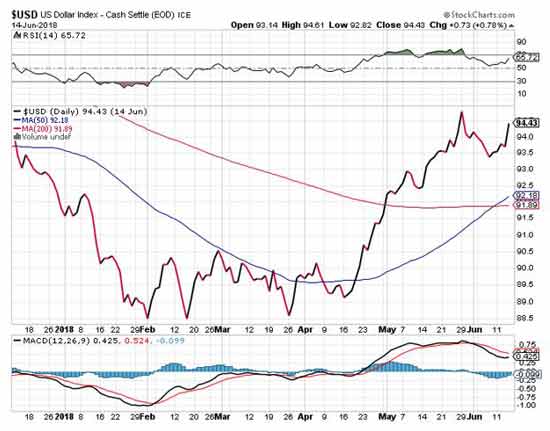 As for gold, after Friday’s smackdown, I think most of the selloff is done.  However, if we do see more downside, I’d expect it to be very limited, perhaps to $1,270. 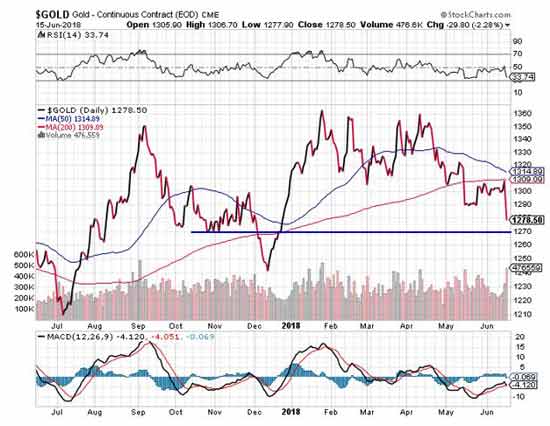 And interestingly, gold stocks held up better than gold through Friday’s selloff.  The gold stocks to gold ratio actually enjoyed an uptick that day. That’s a sign investors aren’t too worried about gold’s dip. 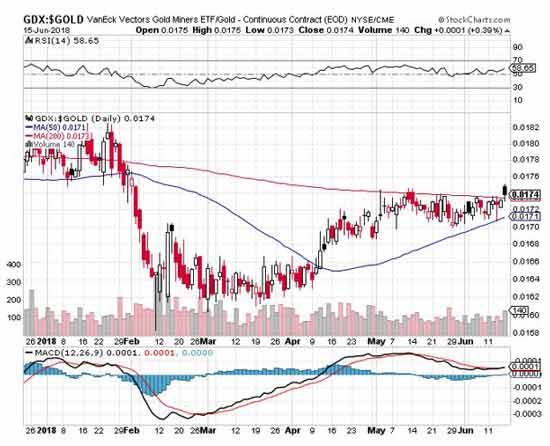 Here’s the bottom line for me…

With the rate hike official, it’s time for gold to rise.  The pressure has been released.  I think Friday’s downside action was a final shakeout of weak hands.

Remember that both the December and March rate hikes played out exactly like that.

Your Financial Future Is at Stake (Are You Prepared?)

If you’re like most Americans, you’ve felt a sense of market turmoil ahead. We could be in for another white-knuckle ride… a “Great Reckoning,” if you will.

The vast majority of folks don’t see this coming, and those few who do are not preparing properly… nor profitably.

So ask yourself, right now: Are you where you want to be financially?

If the answer is yes, that’s great.

If the answer is no, then understand that you are not alone – and you need to click here now…

← Ethereum Prices Climb Higher Thanks to New SEC Comments
A Blockchain ETF Is the Best Play for This $3.1 Trillion Market →