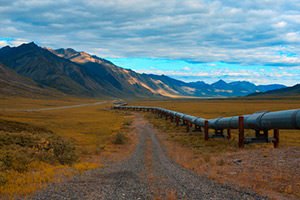 One of the oldest investment philosophies says that when the companies that make goods and the companies that transport goods are doing well, the economy must be in good shape. Of course, that strength is typically reflected in the stock market.

The same is true for individual industries, including oil and gas. And that’s why we’re going to show you one of the best oil pipeline stocks to buy today. Because right now, the crude oil market (and energy in general) is in an extremely bullish trend.

It’s no stretch to credit the improving economy, as well as the rising demand for power over that span. After all, businesses need power to turn on the lights and create their products.

It makes perfect sense that companies transporting oil have more business when the economy is rolling. And that’s why the current increase in oil production signals a huge boon ahead to pipeline stocks.

Unfortunately for producers, the oil transportation infrastructure did not keep pace. That means investment in pipelines that bring the oil from fields to refineries must increase.

The U.S. Energy Awakening Is Great for Pipeline Stocks

From better extraction methods to the burgeoning shale oil industry, the United States is now in better energy shape than it’s ever been. According to the U.S. Energy Information Administration, the United States became the top oil producer in 2017 at 14.46 million barrels per day. That’s 15% of the world total.

It also means the United States is now an exporter of oil, reaching the No. 13 position last year at 2.6% of all oil exports.

Because the U.S. remains the top consumer of oil globally – by far – the country is now in a power position. It will be able to set the global pricing picture.

OPEC can’t do a thing about it, either. The Russia-Saudi agreement to limit production cannot help. Neither can reduced production from the likes of Iran, Venezuela, Libya and Nigeria. The United States holds all the cards.

This is the perfect time to be an American energy investor if you know which stocks are properly positioned. Right now, that includes operators of the pipelines and builders of the infrastructure.

Today, we’re bringing you the best oil pipeline stock of the bunch. In fact, we think it could at least double your money in the next year…

The Best Oil Pipeline Stock to Capitalize on this Trend

Combining both infrastructure building and oil transportation is our top pick, McDermott International Inc. (NYSE: MDR). McDermott is a leading global engineering and construction firm and is heavily involved with offshore energy projects.

However, over the past year, the company aggressively moved into oil pipeline development in the United States and abroad, recognizing early that there was a huge opportunity to cash in on rising oil production.

In May 2018, the company closed its deal to acquire the major engineering firm Chicago Bridge and Iron. The merger created a vertically integrated onshore and offshore engineering and construction company and really beefed up McDermott’s resources needed to capitalize on the U.S. energy boom.

The company’s numbers back this up. McDermott recently revised its 2018 fiscal year guidance – the company expects to generate between $0.60 and $0.63 per share, up from its previous estimate of $0.53.

The market has not yet caught on to the fundamentals, which means all of this potential is not yet baked into the stock price. With it trading near the bottom of a two-year range, there is a big argument that investors will soon realize that the stock is cheap on a historical level.

One tiny company is at the center of a new breakthrough technology that could one day be used by every person and business in the world.

And a single company is manufacturing the parts needed to roll out this technology ASAP. It recently inked four major deals that could spark a 466.6% revenue surge.

The gains on this one stock could single-handedly earn you enough to retire. Click here now to learn more…

← Students Are Demanding to Join the Cryptocurrency Revolution
Canada Weed Insider: “Craft Cannabis” Is the Next Investor Cash Crop →