Bitcoin prices were slightly down today, but recent survey results from Thomson Reuters show there could be more long-term gains on the way.

The survey found one in five financial institutions is considering trading in the $395 billion cryptocurrency market in 2018. More widespread adoption will lead to more demand, and prices tend to climb when there’s more buying activity. 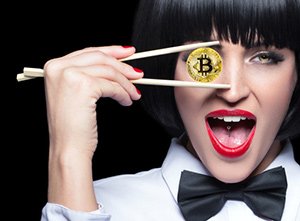 The survey also suggests about 70% of the institutions surveyed will begin trading within the next six months.

Here is a recap of the top five cryptocurrencies by market cap as of 8:30 a.m. EDT.

On April 19, Litecoin made history.

A $99 million transaction between two digital wallets was completed.

Stunning Video Footage: Watch this guy become $4,238 richer in under a minute – then follow his simple instructions to learn how you could pocket a potential $2,918 in just one move. Click here…

But it wasn’t the amount of the transaction that had heads turning. This exchange was done in just 150 seconds, at a cost that is lower than mailing a letter at the post office.

This has major financial institutions issuing warnings ahead of one of the biggest technological shifts in the history of the world.

The Top Cryptocurrency Stories for Wednesday

There’s no guesswork involved, and the best part is, it’ll only take you 10 minutes per day!