An impressive Bitcoin price surge of 150% since April 1 has led a general rally in cryptocurrencies this year.

But Bitcoin has far outpaced the gains of its fellow cryptos, making it the most dominant it’s been since March 2017. 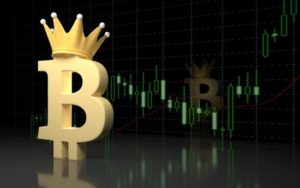 I’m talking about Bitcoin’s portion of the total market value of all cryptocurrencies.

And it’s more than twice where it was in January of 2018, when Bitcoin dominance had slipped to 33%.

If you think of all cryptocurrencies as a big pie, the size of the Bitcoin slice has been growing while just about all the other slices have been shrinking…

Many cryptocurrencies have risen in value since April 1, but not nearly as much as the Bitcoin price. Ethereum is up 27.65% and Litecoin is up 16.4%. But some have actually declined, with XRP down 16.4% and EOS down 9.5%.

The Next American Aristocracy is expected to be fueled by today’s cannabis boom. If you take advantage now, you could enjoy the kind of wealth “that lasts generations.” Click here to see for yourself…

Over the past three months, the trend has been even more pronounced, with the price of Bitcoin rising 31.4% while other top altcoins took heavy losses:

Some in the crypto community have dismissed the Bitcoin dominance metric. But the reality is that many folks who jumped into altcoins during the ICO craze, thinking they’d duplicate the stratospheric gains of early Bitcoin investors, have lost 70%, 80% – even 90% – of their money.

What appears to be happening is that a rising number of altcoin investors are throwing in the towel as Bitcoin consolidates its gains.

But nothing is that easy in the world of crypto…

While some observers believe the decline in altcoins is permanent, others see the bottoming of a cycle that will lead to what’s known as “alt season” – a resurgence in the prices of altcoins.

Defenders of altcoins believe current prices are a bargain and that buyers now will be rewarded handsomely, with some suggesting 1,000% gains. Many, though not all, also think Bitcoin will lose relevance until it is overtaken by other cryptocurrencies.

At the other extreme are the so-called “Bitcoin maximalists” who say that altcoins are dying and that Bitcoin dominance will only increase.

So who’s right?Both have a chance of being right, but I don’t see either extreme scenario happening.

Instead, I see a more practical outcome.

For one thing, 2,000-plus cryptocurrencies is way too many cryptocurrencies. Hundreds have been exposed as scams or have been abandoned, while hundreds more are slowly dying (trading at very low daily volumes).

Within the next few years, hundreds more will die.

That’s not to say that all cryptos not named Bitcoin are doomed. But what’s been going on appears to be part of a long-anticipated shakeout period for cryptocurrencies.

The surviving altcoins will be those that offer true utility – something that people will use for one or more specific purposes. But there won’t be thousands. I expect that less than 100 cryptos will exist five years from now.

I also think Bitcoin will dominate, at least when it comes to value. Bitcoin has established itself as the crypto store of value, the “digital gold.” I doubt that will change because of Bitcoin’s fist-mover advantage, the network effects, and the security it derives from its high-and-rising mining Hashrate.

The altcoin survivors will continue to have value, but that value will come from their utility.

Look at it this way. If Bitcoin continues to be the digital gold, the surviving altcoins will be like other commodity metals.

I liken Ethereum to the metal iron – a component of steel and used primarily to build things. Ethereum is the foundation of many other cryptocurrencies and supports a large Dapp (distributed application) ecosystem.

Other cryptos will serve different needs just as metals like copper, aluminum, and nickel do. Each will have a purpose and a value.

That ship has sailed.

Angel investing is taking the world by storm.

Everyday people from coast to coast are now backing little-known startups long before they IPO, and they’re exploding in value, becoming worth billions upon billions of dollars.

But when you’re in the position to have all of these exciting deals at your fingertips, you need a way to determine which could be winners – and which are nothing more than hype.

As you’ll see in this brief video, the Angels & Entrepreneurs Summit is exactly the ticket…