Security token offerings will replace initial coin offerings this year, but that’s just a sliver of their potential.

One pioneer in this space estimates security token offerings (STOs) could grow to $10 trillion in just two years.

It’s clear STOs will revolutionize investing as we know it and reinvigorate the cryptocurrency markets in the process.

Featured: Crypto Taxes Are a Mess: Here’s What the IRS Needs to Fix Before 2019 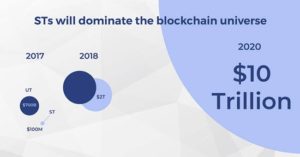 That’s because security token offerings will do more than simply provide a legal path for companies seeking to offer new cryptocurrencies. A security token can be linked to virtually any type of investment, such as stocks or commodities.

One of the primary STO platforms, Polymath, estimates that security tokens will soon outdistance the now-dominant “utility tokens” like Bitcoin. Polymath sees security tokens exploding to a value of $2 trillion in 2018 alone and $10 trillion by 2020.

This was all triggered by the initial coin offering (ICO) phenomenon of the past several years.

Last year, ICOs drew a lot of investor attention by raising millions of dollars in seconds. Just in 2017, ICOs raised more than $5.3 billion worth of capital. The largest, Filecoin and Tezos, raised more than $200 million each.

But there was a problem…

Where ICOs Hit a Snag

ICOs took regulators by surprise. As something new, ICOs didn’t clearly fall under any existing rules. Even after coin offerings started raising millions of dollars, regulators were slow to react.

That opened the door to scammers, who quickly discovered you could conduct an ICO, pocket a few million dollars, and disappear.

The rise of bad actors drew the scrutiny of the U.S. Securities and Exchange Commission (SEC). The SEC issued a warning about ICOs last July after investigating Ethereum’s DAO fiasco of 2016.

The SEC concluded the DAO was an illegal offering of a security. This was a hint of what was coming. The agency issued further warnings in August and November.

The November warning reminded investors of the DAO investigation, noting “the Commission warned that virtual tokens or coins sold in ICOs may be securities, and those who offer and sell securities in the United States must comply with the federal securities laws.”

By December, the SEC was taking action. On Dec. 11, the SEC announced it had halted the Munchee Inc. ICO; in January, it seized the assets of AriseCoin, calling that ICO fraudulent.

If You’re Not Making Millions of Dollars with Cryptocurrencies… You could be. Click here to discover the tiny coin that will soon be BIGGER THAN BITCOIN… and how to claim YOUR cryptocurrency fortune while you still can.

At a U.S. Senate hearing in February, SEC Chair Jay Clayton summed up how far the agency had come.

“I believe every ICO I’ve seen is a security,” he told the Senate Banking Committee.

At the end of February, the SEC sent subpoenas to as many as 80 companies and individuals involved with ICOs, according to The New York Times. In March, the SEC warned cryptocurrency exchanges against trading “unregistered securities” – in other words, ICOs the SEC considers securities.

The SEC’s hard line could have spelled the end of ICOs, at least in the United States.

But the SEC isn’t trying to ban the use of cryptocurrencies to raise capital. In his December memo, Clayton acknowledges ICOs “can be effective ways for entrepreneurs and others to raise funding, including for innovative projects.”

And the SEC has always offered another, legal option – which is where security token offerings come in…

How Security Token Offerings Solve the Problem with ICOs

ICOs didn’t need to fly under the radar of the SEC. The 2012 JOBS Act created several methods for raising funds ICOs could have used that would have kept them compliant with SEC rules.

These include “Regulation D,” Regulation A+,” and crowdfunding.

The main reasons no one bothered was because using these alternatives:

But with the SEC cracking down, the JOBS Act options – particularly Regulation A+ – look much more appealing.

Security token offerings are likely to use Regulation A+ for several reasons:

STOs will also help weed out bad actors. The filing requirements with the SEC, as well as the cost – in the hundreds of thousands of dollars, depending on the size of the offering – will deter the fly-by-night operators that have plagued the ICO space.

But as I noted earlier, security token offerings are much more than a way for cryptocurrency tokens to become SEC-compliant.

STOs Will Have Virtually Unlimited Reach

While a ready legal framework exists for STOs in the JOBS Act regulations, companies still need a compliant platform to help them execute one.

So far, at least two such platforms have emerged: tZero, a subsidiary of Overstock.com Inc. (Nasdaq: OSTK), and Polymath. Far from rivals, the two companies recently announced a partnership.

Both are looking beyond the world of ICOs.

The tZero exchange is an SEC-certified alternative trading system. It can trade any kind of security token, including those tied to investments outside the realm of cryptocurrencies. For instance, Overstock shares have been trading on tZero since last year.

Polymath has even grander ambitions.

The home page of the Polymath website boasts that the platform “empowers trillions of dollars of financial securities to effortlessly migrate to the blockchain.”

“Stocks, bonds, venture capital, private equity, equity, and LP shares will all become programmable KYC-aware tokens,” declares a recent entry on the corporate blog. (“KYC” stands for “know your customer” and is a common requirement of financial institutions to prevent fraud.)

Stop and think about what this means. Virtually every investment on earth potentially could be “tokenized,” representing hundreds of trillions of dollars.

And there are strong incentives for this to happen…

Why You’ll Be Hearing a Lot More About STOs

Converting to securities tokens will eliminates middlemen, which reduces fees and increases accessibility. The programmability means such things as dividend payments and proxy voting can be built right into the token. Digital tokens will also enable 24/7 global markets.

Meanwhile, investors get a token that’s more similar to a stock than a cryptocurrency. A security token represents ownership in the company as well as shareholder rights.

STOs also create new kinds of investing opportunities in areas like real estate. A property can be tokenized, and the shares can be sold to multiple investors.

The potential is mind-boggling. The total value of the world’s investments – stocks, bonds, real estate, and commodities – is somewhere in the neighborhood of $400 trillion. If just a small percentage of that gets tokenized, it will pull trillions of dollars of capital into cryptocurrencies.

Polymath says it already has more than 20,000 STO issuers lined up – that’s over 12 times the number of cryptocurrencies listed on CoinMarketCap.com.

If you thought last year’s ICO craze was impressive, wait until you see what happens with security token offerings over the next 12 to 18 months.

I hope you’ll take advantage of all the great research on this breakout digital coin.

To find out how to get all this, just take a look.