A little while back, I told you how this rare precious metal, used in specialized technological applications, had become historically cheap.

In fact, platinum was trading for less than it was at the depths of the financial crisis.

I said it was on the cusp of soaring, thanks to a confluence of demand, supply, and utility.

Well, since its August lows, platinum is already up over $100 per ounce, good for a blistering 13% in just two and a half months.

The platinum miner I suggested then has gained over 35% from mid-August, while broader equities are down 3.5%.

This precious metal has such crucial applications, it’s sure to head higher in the months and years ahead, especially as this sector continues to make a comeback.

Platinum has numerous applications, from automotive to jewelry to industrial. Its largest segment is in autocatalysts, responsible for 40% of demand. Vehicle manufacturers use platinum in emissions control systems in order to cut exhaust pollution.

Diesel vehicles favor platinum over palladium, as it’s the more effective and efficient for that technology. But thanks to growing restrictions on diesel vehicles in Europe and parts of Asia, as well as the Dieselgate scandal, whereby vehicle emissions were manipulated, the diesel subsector has lost some ground.

Many raise the concern that new technologies will take on a much larger share of the automotive sector.

But consider that fuel-cell vehicles use platinum to produce electricity in hydrogen-based fuel cells. These are gaining in popularity, while requiring several times the amount of platinum the standard internal combustion engine uses.

By some estimates, hydrogen-powered fuel-cell vehicles could account for 20% of all vehicles by 2050.  That would mean about 400 million cars, 15 million to 20 million trucks, and roughly 5 million buses. 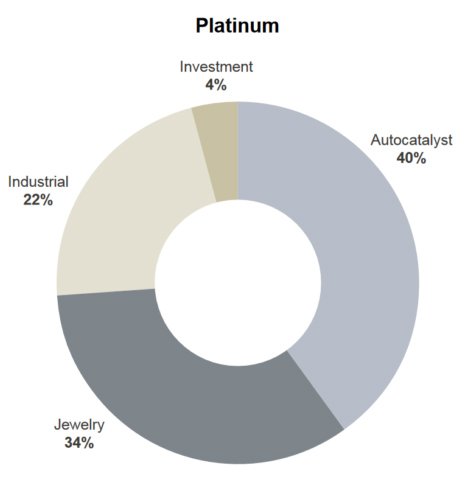 At 34%, jewelry is a significant demand driver for platinum. Asians appreciate wearing the metal, though traditional demand from consumers in Japan and China has diminished of late.  Meanwhile, demand from India has sprouted, having increased 16% in 2017.

Industrial applications are the third largest demand segment for platinum, but it’s not to be underestimated. Electronics and chemical and glass production all use platinum in sophisticated ways, and most simply can’t substitute with palladium despite its similar characteristics.

Platinum has become essential to the production of high-performance glass, like the kinds used in smartphones, high-tech flat-screen TVs, and optical fibers. Analysts expect industrial demand for platinum to rise by about 3% this year, with the glass sector a significant portion of that increase.

Internal combustion engine vehicles can use platinum and palladium interchangeably for autocatalysts. However, with palladium having now soared to $1,100 per ounce from just $500 just three years ago, you can be sure manufacturers are looking square at platinum with a keen eye. At just $870 per ounce, the 21% discount from palladium prices can make it a viable alternative. Some 10 years ago, palladium traded at as much as a $1,000 discount to platinum.

Today, platinum’s $230 discount to palladium and $350 discount to gold would have been unimaginable just a few short years ago. And yet that’s today’s reality, but odds are good that it just won’t last.

According to the World Platinum Investment Council, the aboveground stock of available platinum has been rapidly waning since 2012.

JPMorgan forecasts that by 2020, 55% of platinum group miners will be unable to turn a profit at current prices for platinum group metals (PGM). Platinum has easily become the PGM that’s the most undervalued. Without a substantial price increase, some 1.7 million ounces of supply, representing nearly 30% of world mine output, may not make it to market.

So it’s time you take a second look at my recent recommendations.

It’s Time to Add These Platinum Plays to Your Portfolio

In late August, I showed you how, according to www.sentimentrader.com, platinum hedgers (considered smart money), had reached a 20-year extreme bullish position. 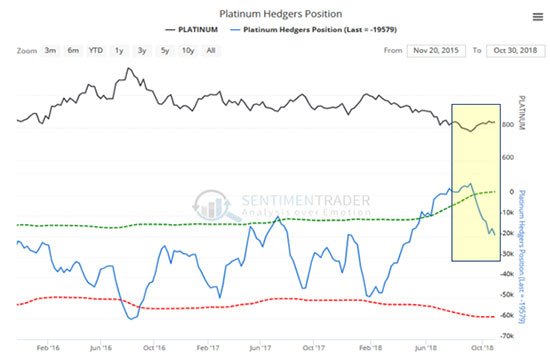 As it were, platinum hedgers almost immediately began reversing their positions as platinum prices bounced dramatically from their lows near $780.

Since then, Physical Platinum Shares is up nearly 9.5%.  Not bad for three months on the price of platinum alone.

My other suggestion was Ivanhoe Mines Ltd. (TSX:IVN).

Here’s what I said:

“In the Democratic Republic of Congo (DRC) is the Kamoa-Kakula Copper Project, ranked as the world’s largest undeveloped high-grade copper discovery. Also in the DCR is the Kipushi Project, an ultra high-grade historic underground zinc-copper mine.

“To be sure, Ivanhoe is a higher risk, higher reward play than Physical Platinum Shares, and it’s not an all-platinum play, either. But Platreef is so big and provides so much leverage to the share price, I expect Ivanhoe to soar in lockstep, but with a multiple, to platinum prices.”

Ivanhoe proceeded to run up by 25% into early October. It has retreated a bit, but continues to offer tremendous upside.

In the three months since August, progress has been substantial. The company has announced a third major copper discovery on its 100%-owned exploration licences near its existing deposit in the Democratic Republic of Congo.

More importantly, Shaft 1 has reached the top of Platreef’s “Flatreef” deposit at 780 meters below surface at its PGM nickel, copper, and gold project in South Africa. Ivanhoe has plenty of upside from here.

Platinum is a deeply undervalued metal right now. But smart money and smart investors have begun recognizing this fact. It’s time to add a little platinum to your portfolio allocation.