Gold prices are officially entering correction territory as gold continues to head toward its ultimate bottom. As it turns out, last week’s lows were not it.

It’s been another gold meltdown, frustrating the bulls to no end and finally entering a correction.

Early in the week, Fed Chair Jerome Powell testified before the Senate, saying that more rate hikes were the right strategy “for now.” 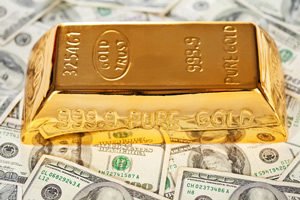 Over the last week, the U.S. Dollar Index (DXY) put on another big run, tacking on 100 basis points, or a little more than 1%, as investors reacted to Powell’s testimony.

Powell’s comments and the further dollar rally each chopped $15 off the gold price until it flirted with $1,210. That was enough to pull gold down into correction territory with a better than 10% drop since its last peak.

But last week wasn’t all bad for the price of gold.

In fact, last week could be the bottom gold needed to hit. Let’s take a closer look, including a look at my latest gold price prediction…

Of course, it’s early – and the jury is still out – but gold seems to have had the first good week in many.

It’s also easy to look at gold’s recent past and realize the exact same pattern played out not long ago, and gold still managed to reach for lower lows.

The dollar continues to dominate gold’s fortunes, and its behavior is intriguing.  Since late June, the DXY has twice bumped up against the 95.5 level and failed, with this week being the most recent occurrence.

Not only did it fail – but miserably so both times… 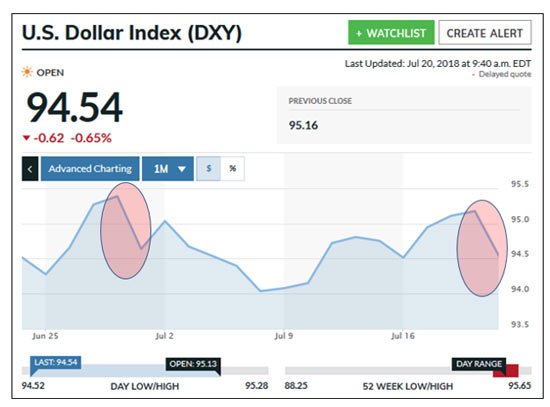 On Tuesday (July 17), as gold declined to $1,225 on the rising dollar, gold stocks as tracked by the VanEck Vectors Gold Minters ETF (NYSE Arca: GDX) hardly moved. Gold gave up a whole 1%, while GDX was (just barely) up by $0.01 on larger-than-average volume.

But things reversed that afternoon.

U.S. President Donald Trump told CNBC, “I don’t like all of this work that we’re putting into the economy and then I see rates going up… Because we go up and every time you go up they want to raise rates again. I don’t really – I am not happy about it. However, at the same time, I’m letting them do what they feel is best.”

By Friday (July 20) morning, more Trump comments would shake the dollar and gold. In a CNBC interview, he said he was ready to up tariffs on Chinese goods to $505 billion. The DXY lost about 60 basis points, and gold popped, this time to $1,232 around 8:30 a.m. 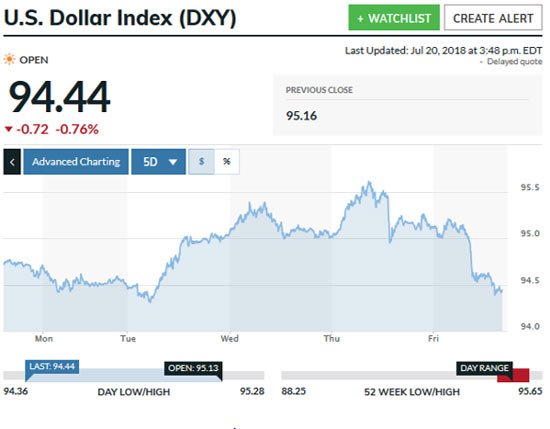 Then President Trump tweeted, “… Tightening now hurts all that we have done. The U.S. should be allowed to recapture what was lost due to illegal currency manipulation and BAD Trade Deals. Debt coming due & we are raising rates – Really?”

The DXY lost more than 100 basis points from Thursday’s highs, and gold climbed to close at $1,231.

That might be the crucial trigger we needed to bottom gold prices and start the next gold rally.

What a Bottom Means for My Gold Price Target for 2018

Although the dollar suffered a reversal at resistance near 95.5, it’s still to early to say whether it’s ready to enter a new wave down. 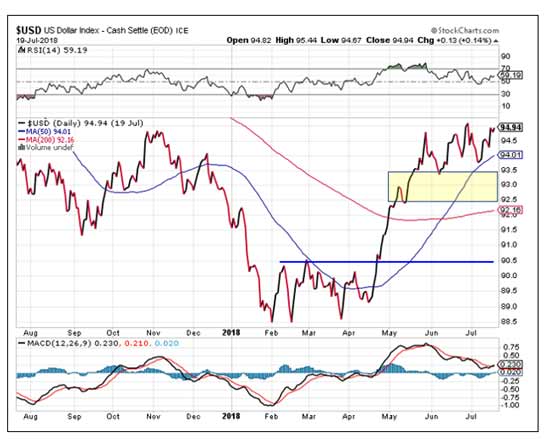 Gold itself has suffered the dreaded 10% correction. 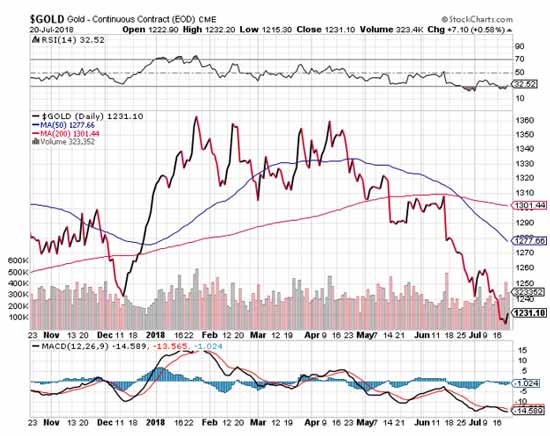 The bounce back from those levels on Friday with strong volumes are encouraging, but just a blip higher on the chart.  However, the relative strength index’s bounce back above 30 and the moving average convergence/divergence’s flattening at low levels suggest there could be more bounce left.

Looking further back at gold prices, with gold closing below the $1,240 December low, we can’t dismiss the possibility of an even lower low before bottoming. 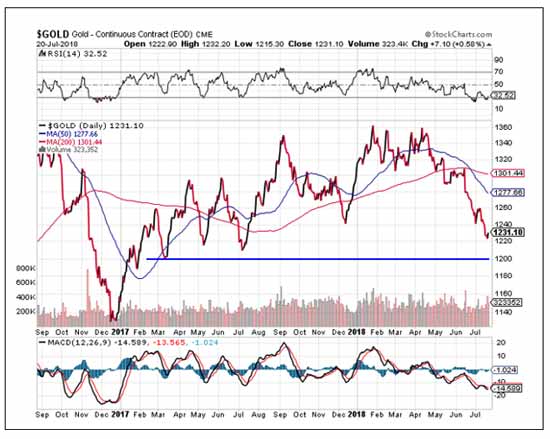 Gold stocks as represented by GDX also suffered a strong sell-off since their April highs but surprisingly gave up less than gold itself. 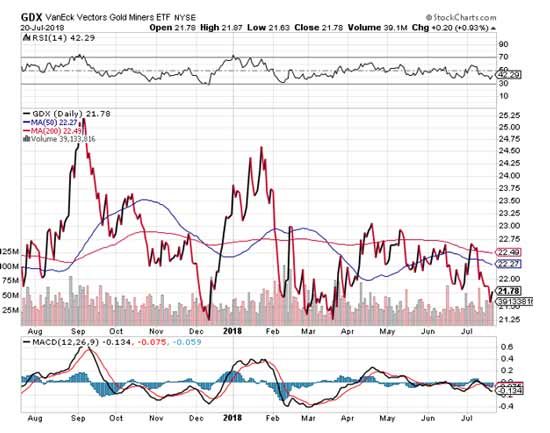 And in relation to gold, if we look at the gold-stocks-to-gold ratio, the recent action is also encouraging. 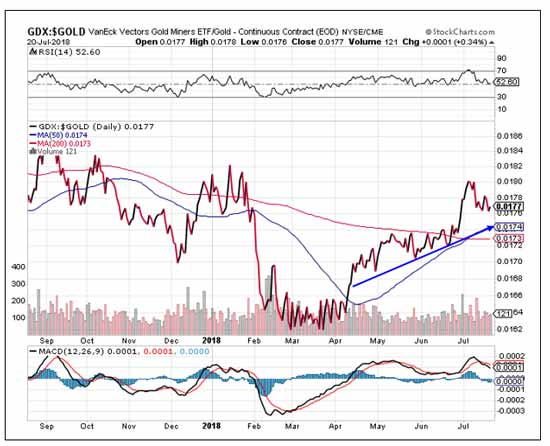 Despite the gold and gold stocks sell-off, gold stocks have held up well relative to gold. And the recent correction didn’t even pull the ratio down below its rising trendline.

Fortunately, Americans from coast to coast have discovered a loophole that entitles them to a sizeable portion of this cash.

← The Price of Bitcoin Is Closing In on $8,000
Meet the Newest — and Hottest — Marijuana Stock on the Market →