45% from its multi-year highs. A gold price decline exacerbated this tumble. For the weakest producers, this is a concern.

While this has led to many investors steering clear of the sector, some miners are now at their lowest multiples since the 2015 bear market bottom, when margins were half what they are today. Many miners were carrying considerable amounts of debt.

Today, this same group of producers will enter Q4 2022 in net cash positions, are paying out dividends double that of the S&P-500 (SPY), and are much more disciplined, learning from past mistakes. To summarize, I see this as a rare opportunity to buy a few high-quality businesses.

Let’s take a look at three stand-out names below:

Agnico Eagle Mines (AEM) is the world’s 3rd largest gold producer, on track to produce approximately 3.3MM ounces of gold this year. This significant growth from ~2.0MM ounces in 2021 is related to the merger of equals with Kirkland Lake Gold (KL), which saw the company add three of the world’s most profitable mines to its portfolio (now 11 mines total).

Notably, the company did not sacrifice from a jurisdictional safety standpoint when considering this transaction, adding three mines in two of the most attractive jurisdictions globally: Canada and Australia.

Normally, the large producers do not make great investments. This is because they struggle to grow production and reserves per share. The lack of growth is not their fault and is not due to poor management.

Instead, it’s because major discoveries are becoming rarer, and their size makes it hard to grow organically, with 100,000 – 200,000 ounce per annum operations not really moving the needle.

However, AEM is in a unique situation, having multiple opportunities to grow production within its portfolio and four development projects in the wings where it could also grow production. So, if the company can execute successfully, it could see production increase to 4.5MM ounces per annum by 2029.

AEM’s potential for a 35% production growth rate (2029 vs. 2022) means that it should be able to grow cash flow and earnings per share each year regardless of whether the gold price chooses to cooperate or not, a key differentiator.

Despite this unique position, the stock is trading at its lowest levels since 2015, at a valuation reserved for a producer with a weak balance sheet and slim margins. This is not the case at all, though, with AEM set to end the year in a net cash position and being one of the highest-margin producers sector-wide. 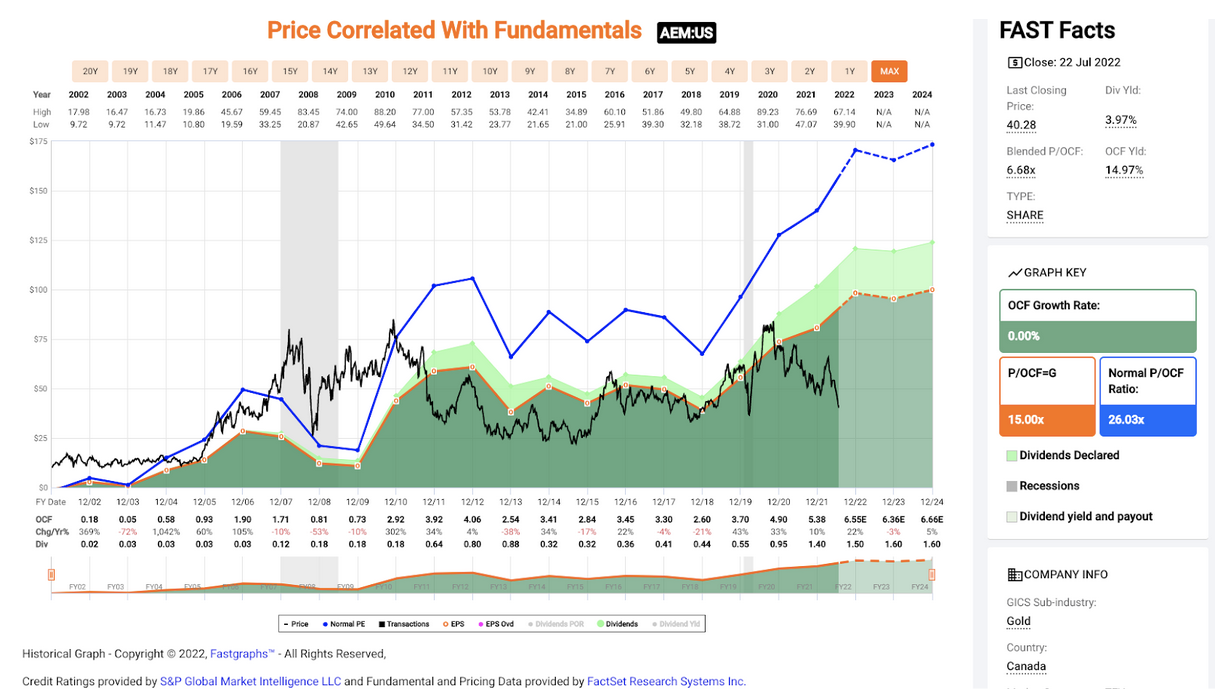 As shown above, AEM has historically traded at 26x cash flow and currently trades at less than 7x FY2022 cash flow estimates.

Even if we use a more conservative multiple of 13x cash flow, a 50% discount to the historical multiple, AEM would command a valuation of $78.00 per share, which also assumes more conservative cash flow per share estimates ($6.00 per share). Hence, I see this pullback in the stock as a gift, with it rarely ever being this cheap over the past decade.

Kinross Gold (KGC) is a mid-cap gold producer with multiple mines in the Americas, as well as the massive Tasiast Mine in Mauritania.

Like Agnico, Kinross has been punished over the past year and is down a whopping 70% from its highs. This under-performance is partially due to having to sell its Russian assets in a 50% off sale following the invasion of Ukraine.

Although this padded the company’s balance sheet with $300MM in cash and an additional $200MM from its Chirano Mine sale, it put a severe dent in what Kinross was touting as a growth profile post-2022 (400,000 fewer ounces of annual production related to its sales).

While this is a downgrade from the previous investment thesis (20%+ growth at slightly lower costs), the sell-off in the stock looks to be overdone. This is because with Kinross shedding its Russian exposure, it should be able to…

← Are Pot Stocks Back In Play? 3 Names To Consider
The Best Way to Play Inflation – and This Profitable Housing Niche →