But that hasn’t stopped many prominent cryptocurrency personalities from making Bitcoin price predictions of $250,000 or even higher. 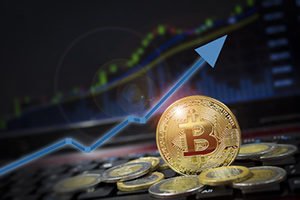 The latest comes from Bitcoin entrepreneur and author Mark Jeffrey, who has written two books on the No. 1 cryptocurrency: “Bitcoin Explained Simply” (2013) and “The Case for Bitcoin” (2015).

During a Jan. 17 interview with the Australian podcast “The Next Billion Seconds,” Jeffrey acknowledged the $250,000 prediction to host Mark Pesce and explained his reasoning.

He compared the Bitcoin boom and crash to the dot-com bust of the late 1990s and early 2000s, noting that crypto investors “got very over exuberant and maybe extended themselves a little bit too far, and then they got scared.”

Jeffrey then said that what we’ve just experienced is only the “second act,” with the best yet to come. “The third act is ‘Return of the Jedi,’ and we’re not there yet. That is coming.”

Jeffrey did not specify in the interview when he thought Bitcoin would reach $250,000, a point he clarified on Twitter. But his thinking is not unusual within the crypto community.

In fact, such lofty Bitcoin price predictions are surprisingly common…

Jeffrey isn’t alone in calling for a Bitcoin price of $250,000. Venture capitalist Tim Draper agrees with the target but went one step further by attaching a date to it: 2022.

Cameron Winklevoss – who, along with his twin brother, Tyler, operates the Gemini Bitcoin Exchange among other crypto ventures – has predicted Bitcoin will reach $300,000 within 10 to 20 years.

And there’s cybersecurity pioneer John McAfee, who has steadfastly stood by his forecast of the price of Bitcoin reaching $1 million by 2020.

Other high-flying Bitcoin price forecasts have been derived from chart patterns. One recurring theme in Bitcoin charts shows the price in the context of its “halving” events.

(The software that controls the Bitcoin network is set up to cut the reward – the amount of Bitcoin a miner receives for solving a block – in half at regular intervals. The first halving in 2012 cut the reward from 50 bitcoins to 25. The second was in 2016 and cut the reward to 12.5. The next halving is expected in May of 2020.)

Other charts vary a bit on the timing and how high the next peak will be, but they all foresee peaks much higher than the just-under-$20,000 all-time high reached in December of 2017. A similar chart projects the price of Bitcoin in August of 2023 at $160,000.

The accuracy of these charts in predicting the price of Bitcoin is debatable, but this digital asset has seen some seriously dramatic moves in its 10 years of existence.

And the charts generally jibe with the predictions of the cryptocurrency experts, most of whom use one or more fundamental catalysts as the basis for their forecasts.

People who don’t follow cryptocurrency closely may not realize that the decline in prices through 2018 has barely slowed development of this technology. And on Bitcoin in particular, work on several game-changing upgrades has continued at a rapid clip.

Likewise, interest from the investing sector has continued to deepen over the past year despite the crypto bear market.

Why the Price of Bitcoin Could Actually Reach $250,000

First of all, there’s more people working on crypto technology than ever before – and demand for developers continues to rise.

A study by Glassdoor last fall showed that as of August 2018, there were 1,775 blockchain-related job listings – four times the 446 listings at the same time just one year earlier.

And the technology has continued to advance. In particular, much progress has been made on the Lightning Network, a technology that addresses Bitcoin’s biggest pain points. Lightning transactions occur nearly instantly with negligible fees and don’t add bloat to the blockchain database.

The Lightning Network has grown rapidly over the past year, with the number of “channels” – the core technology that makes it work – increasing from less than 2,000 a year ago to more than 26,000 now. Network capacity (the amount of Bitcoin the network can transmit at a given time) has grown from less than 5 bitcoins to 700 bitcoins.

And Lightning is still only in its “testing” phase. In my view, it’s a sleeping giant that eventually will be a key driver of mainstream Bitcoin adoption.

Another brewing Bitcoin upgrade, Schnorr signatures, is even more obscure but no less important. This technology will improve both scalability and privacy while enabling still more upgrades in the future.

Earlier this month, tech startup Blockstream released Schnorr signature code to the public for testing, the first step on the road to adding it to the Bitcoin codebase.

At the same time, we’re seeing more signs that large-scale investing in Bitcoin is just around the corner…

Like any asset, the Bitcoin price depends on market demand. If demand spikes, so will the price. That’s especially true of Bitcoin because its supply is restricted.

One event that will surely drive demand is the approval of a Bitcoin ETF. While that road has been a long one, I believe the U.S. Securities and Exchange Commission (SEC) will get there within the next year or two.

Commissioner Hester Pierce has already spoken out in favor of approval, and Commissioner Robert J. Jackson said earlier this month that he believes a Bitcoin ETF will win approval “eventually.”

A Bitcoin ETF would make it easy for all investors to buy Bitcoin and would create a massive spike in demand akin to what happened when the first gold ETF was approved in 2004.

Another major source of Bitcoin demand will come from institutional investors. They’re interested in cryptocurrency as a new asset class but have mostly stayed on the sidelines while waiting for the veteran custodian banks to add Bitcoin and other top cryptos.

But this month we’ve seen the first sign that the trickle will become a flood. Morgan Creek Digital has set up a $40 million fund – well above the $25 million target – to allow large investors a vehicle for investing in crypto startups as well as cryptocurrencies such as Bitcoin.

Two pension funds in Fairfax County, Va., as well as an insurance company and a university endowment, are among the initial investors in the fund.

And the major exchanges are also getting in on the act. The Nasdaq (in a partnership with VanEck) and Bakkt, a unit of Intercontinental Exchange Inc. (NYSE: ICE), which owns the New York Stock Exchange – both plan to launch Bitcoin futures markets in the first half of the year.

“The dramatic declines that swept across the crypto space raised questions about the future of these assets and the blockchain technology that underpins them,” Cambridge Associates, a consultant for pensions and endowments, said in a research note released earlier this month. “Yet, in looking across the investment landscape, we see an industry that is developing, not faltering… Despite the challenges, we believe that it is worthwhile for investors to begin exploring this area today with an eye toward the long term.”