On Monday morning (May 6), U.S. President Donald Trump said over a series of tweets that the United States will increase its tariffs on Chinese goods again this week. This rise in trade tensions prompted investors to sell off riskier investments. That’s kicked off a new rally in the price of gold.

The president said the United States will raise the tariffs on $200 billion worth of Chinese goods from 10% to 25% over the course of this week. Beyond that, the president says he intends to go after another $325 billion in Chinese goods with 25% tariffs in the future.

Of course, China wasn’t happy about the president’s latest tweets. Chinese stocks fell 5%, and Chinese officials threatened to skip a trade meeting scheduled for this week. 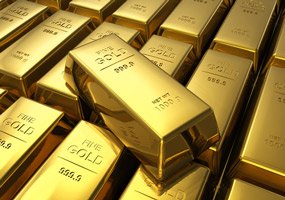 This was a shock to investors and trade watchers because the White House had been saying trade negotiations with China were going very well.

That news sent markets tumbling. The Dow initially fell by more than 400 points before rallying to close down 66 points. The S&P 500 shed 1% and closed 13 points down. The tech-focused Nasdaq dropped 1.1% and closed roughly 41 points down.

But when investor fears rise, safe-haven assets like gold get a boost. That’s why the price of gold rallied after a four-month low last Friday.

And while the broader market fell, gold stocks are riding gold’s rally.

But this is just the start for rising gold prices.

Here’s how the trade war could kick of a gold boom, sending prices nearly 10% higher…

What the Trade War Means for the Price of Gold

The price of gold has been stuck in a rut over the last month. But data suggests the lows were just small hiccups in gold’s growing value.

Money Morning Resource Specialist Peter Krauth says there are two major reasons for gold prices to climb out of their funk. And the trade war uncertainty might be the catalyst we need to start the rally.

First, yield curve inversions are solid predictors of recessions. Because of this, investors tend to flee stocks when the yield curve inverts. The curve briefly inverted in March, which means investors may start to look for safer assets over the next year.

Second, the Fed is keeping rates flat and might even cut rates this year.

The current market is even beginning to price in future rate cuts. And this is exciting for gold investors.

That’s setting the stage for a renewed gold bull market, and the trade war is only pouring gas on the fire.

In fact, Peter Krauth says the year-to-date high of $1,340 that was set in February will be overtaken in the next few months.

If you’re interested in Krauth’s full analysis and price target for gold in 2019, you can check it out here…

Secret Weapon Set to Foil China’s Master Plan: The South China Sea is about to get violent, and the Chinese have an alarming new superweapon they think gives them the upper hand. Or at least, that’s what their war hawks think. But they couldn’t be more wrong. Thanks to a small $6 U.S. defense contractor with a top-secret technology, the Pentagon has an ingenious new checkmate move designed to stop a Chinese sneak attack dead in its tracks. Click here to learn more…