Expectations meet reality when companies have to show their cards during earnings season. While the hype surrounding the legal cannabis sector has been enormous, pot stock earnings reports crushed expectations.

That’s a great sign for pot stock investors. But there’s still time to get in early if you’re sitting on the sidelines. 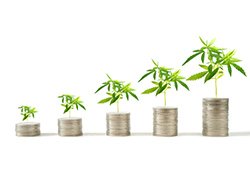 On Monday (March 18), Tilray Inc. (NASDAQ: TLRY), one of the biggest names in the marijuana industry, smashed investor expectations when it announced a stellar first quarter earnings report.

After all, Tilray is a leader in North America’s explosive $12 billion marijuana industry.

But Tilray isn’t the only marijuana firm raking it in.

We combed through the earnings reports of the three biggest cannabis stocks on the market to show you just how lucrative this industry is.

Plus, we’ll also show you how to get in on the ground floor of this exciting industry before the next major catalyst hits…

Tilray’s Earnings Are Just the Tip of the Iceberg

This numbers from Tilray’s earnings report are staggering.

According to its earnings report, the company’s quarterly sales grew to $15.5 million, up from just $5.1 million a year ago.

That’s a 203% revenue increase in just one year.

And it beat even the most aggressive analysts’ expectations, which estimated the company would earn just above $14 million.

These numbers are a clear sign that Tilray is growing like a weed. It also bodes well for the growth of the marijuana industry in general.

In 2018, Aurora’s earnings report showed it brought in CA$54.2 million during the 2018 fiscal year, nearly quadrupling its revenue year over year.

That kind of return is going to result in year-over-year sales growth of between 200% and 500% for the company.

And that’s just the beginning…

Aurora also has one the largest growth capacities of any of its competitors – the company can grow over 500,000 kilograms of marijuana annually. This growth capacity guarantees that the company will be able to capitalize on expanding demand at an increasingly rapid pace. And that will result in even greater levels of revenue.

That same is true for Canopy Growth Inc. (NYSE: CGC), one of the industry’s largest marijuana production companies.

Like Aurora, Canopy is capable of growing at least half a million kilograms of marijuana each year. But because the company has scaled up distribution at a faster pace, its sales have been even larger.

Last quarter, Canopy made CA$63 million in revenue. And that number is on top of a 282% increase in quarterly revenue after Canada legalized recreational marijuana last November.

As you can see, all three of these firms are experiencing tremendous growth in the face of rapidly increasing demand.

And it doesn’t look like that demand is going to slow down anytime soon.

In just the last few weeks, there have been some revolutionary developments across the country that are paving the way for full national legalization – and record-breaking profits.

The bill has the backing of six other senators and is likely to direct the national conversation toward the full legalization of recreational marijuana.

Money will pour into this industry when the U.S. federal government ends its prohibition against marijuana. And it’s simply a matter of time.

Just listen to what former Speaker John Boehner has to say about it, including how you can still get in early…

Former Speaker of the House John Boehner – once the cannabis industry’s most staunch opponent – just revealed an UNCENSORED prediction about America’s most controversial, misunderstood, and what’s quickly becoming our most lucrative industry. If you missed seeing this historic announcement live, go here for a special rebroadcast.