The price of gold consolidated again last week, but that stage of the climb might already be over. If the “golden staircase” pattern continues, gold prices could jump higher again soon.

Gold spent January like a lion, then entered February like a lamb. But momentum and interest have been building for the asset. 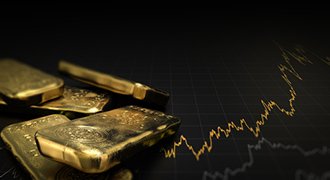 Early last week, gold rallied to a 10-month high, hitting my most recent target before dropping back. But even that retreat was short-lived as bargain hunters stepped in.

And that has the sector abuzz.

With U.S. growth likely slowing, the newly dovish Fed is going to be very hesitant to hit the brakes via rate hikes. In fact, its next move may even be back to the gas pedal via rate cuts.

As it turns out, consumers looking out five to 10 years have lowered inflation expectations to 2.3%, equalling the lowest level on record. Even some Fed insiders have argued inflation should be allowed to overshoot 2%.

Once real interest rates head back toward zero and below and inflation outpaces yields, gold prices will soar.

The Price of Gold Built Even More Momentum

Gold started roaring back this past week, hitting a 10-month high and my latest target at $1,340.

That means it easily surpassed January’s high of $1,320, my previous target.

This Could Be the Most Profitable Dollar You Ever Spend: Tom Gentile’s Cash Course covers all the essential trading ideas you need to know to potentially make thousands in extra income every week. Get access for $1…

Tuesday’s (Feb. 19) action was explosive, certainly helped by a big retreat in the U.S. Dollar Index (DXY). The dollar sold off, and the DXY dropped from above 97 to below 96.5 in a matter of hours, powering gold to $1,340 by noon. The dollar stabilized and the DXY remained near 96.5 while gold did the same and closed at $1,341.

Here’s the dollar’s action in the form of the DXY for the past week: 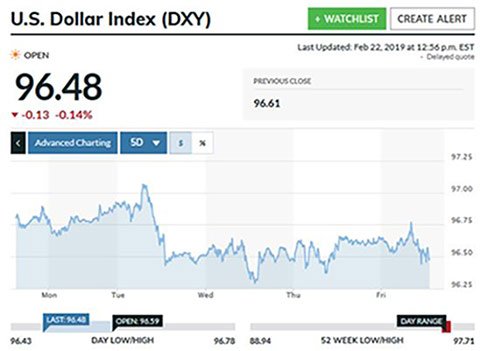 On Thursday (Feb. 21), unsurprising profit-taking emerged in gold, aided by a bit of renewed dollar strength. The DXY regained 96.6 while gold fell back to close at $1,323.

But that didn’t last long, as bargain hunters bought the dip on Friday (Feb. 22). The DXY dropped back below 96.5, while gold rallied to $1,330, a level it held at mid-afternoon.

That’s actually great news for the price of gold.

In fact, it puts gold on the trajectory to hit my latest gold price target…

The dollar remains a bit of a wild card. 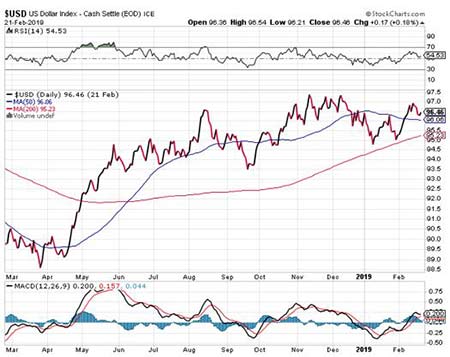 Both the relative strength index and moving average convergence divergence are near mid-range, so they’re not really giving any clues on direction.

The interesting thing is how strongly gold has performed since the DXY’s rally off the 93.5 lows of mid-September.

We can see that gold bottomed only shortly after the DXY and has put in a massive rally since. 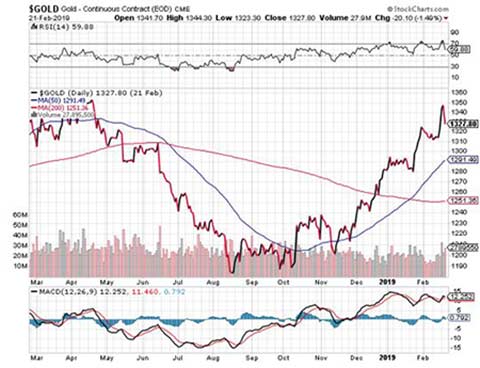 Like I detailed last week, gold can move higher for extended periods, even as the dollar does the same. And gold tends to rally significantly higher once those simultaneous dollar advances finally end.

In that context, gold’s bull could just be getting started.

Interestingly, spot gold prices reached then retreated at the level I had targeted, $1,340. This is still my next target, which gold will need to cross above and hold. At that point, $1,340 could become a new floor as gold then works its way to $1,360 in the “golden staircase.”

A quick look at how gold stocks have been performing is also pretty revealing.

Notice that the VanEck Vectors Gold Miners ETF (NYSEArca: GDX) has powered higher, surpassing its April high of $23. I think this could lead to some short-term profit taking, but $23 could become a new floor. 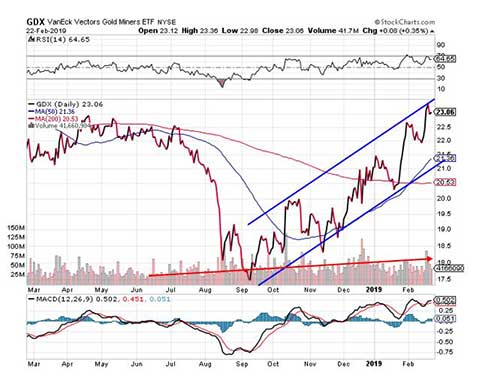 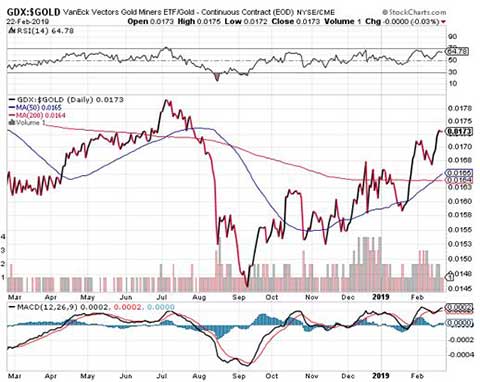 We see a similar pattern to GDX alone. Sentiment is certainly favorable toward gold, but the shift toward gold stocks has been stronger.

Here’s a look at my recent recommendations.

The DB Gold Double Long Exchange Traded Notes (NYSEArca: DGP) are down about 9.2%, but it’s only been a little over one month. Gold’s bull is looking strong, so stay long DGP and/or buy on dips.

The VanEck Vectors Junior Gold Miners ETF (NYSEArca: GDXJ) has participated nicely in the rise of gold stocks and is now up about 10.4% since mid-January. Continue to buy on dips.

Gold continues to look strong, but it could still be overbought. As we near the end of February, the seasonal pattern favors a pullback or at least more consolidation. But given how gold’s been behaving, it may still surprise to the upside.

America’s No. 1 Pattern Trader, Tom Gentile, is giving you a rare opportunity to learn how to amass a constant stream of extra cash – year in and year out.

And he’s going to teach you how to do it entirely on your own.

Go here to claim your seat in America’s No. 1 Pattern Trader Cash Course…

← What’s Trump Really Going to Do About Marijuana?
3 Under-the-Radar Cannabis Stocks to Buy →