“Silver is in a bull market.”

Admittedly, given the past year’s price action, you might think I’m crazy for saying that.

But the (much) bigger picture is rather bullish from here. I say that because global silver mine production has been in decline since 2016. Some analysts expect a minute increase this year of just 0.2% over 2017.

Retail silver demand was down last year, but solar panel production is set for a massive increase.  And silver jewelry, which has become trendy once again, could see as much as a 9% bump in demand this year.

On top of that, it’s still a preferred safe haven – just like it’s been for thousands of years. It likely always will be. Geopolitics and economic uncertainties, especially with currency and trade wars ever-present, make silver an appealing hedge.

Remember: Despite silver being readily available, inventories can and do deplete quickly, throwing the supply and demand equation off balance in short order.

The Demand for Silver Is on the Rise

We know from the Silver Institute’s World Silver Survey 2018 that last year marked the fifth consecutive annual silver deficit. Demand was outpaced by supply to the tune of 26 million ounces. Once again, existing inventories were sourced to balance demand. 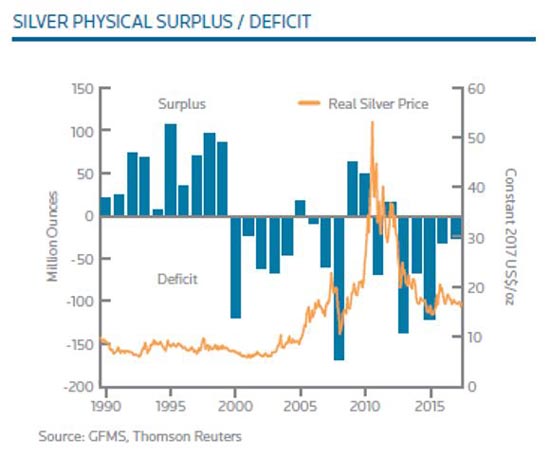 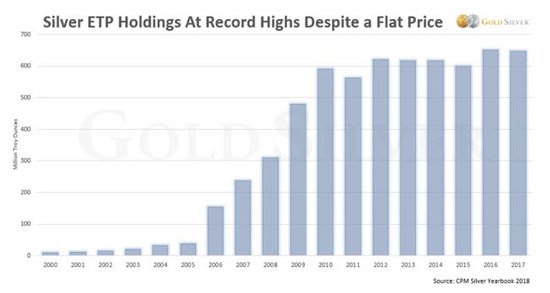 This tells us that owners of these silver ETPs tend to buy and then hold on, despite silver price weakness and lighter overall investment demand.

Fabricated silver means essentially anything made from raw silver that’s used in some practical application or product. Adding up all of these uses, like coins and bars, jewelry, solar paste, and even medical applications, we get a demand number that’s growing at a healthy pace. Total fabrication demand is ahead some 15% in the last six years, close to eclipsing its all-time highs of 2006.

Silver’s Upside Is in This Wedge-Pattern Break

Looking at silver from a technical chart perspective, it’s easy to see why sentiment has been so weak. 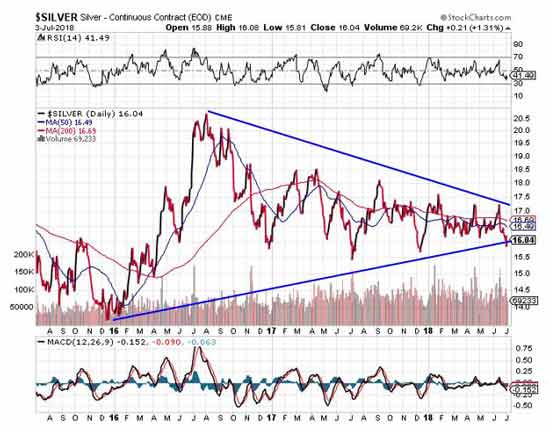 But silver’s also been forming a consolidating wedge pattern. And as we move ahead, silver will inevitably break out of that wedge as it narrows further. I expect the break will be to the upside.

When that happens, junior silver miners should soar as their production and reserves suddenly become more valuable.

And if you own the companies I’m about to recommend, you could find your profits suddenly increasing when that happens…

Fortuna Silver Mines Inc. (NYSE: FSM) is a precious metals mining company with growing silver and gold production in Peru and Mexico and a gold-development project in Argentina.

And since they’re always thinking ahead, in May, Fortuna announced that it had acquired 5.3 million shares of Prospero Silver Corp., pushing its total ownership to 10.7 million shares  representing 22.74% of outstanding Prospero common shares. The investment is a tactical one, since Prospero is a Mexico-focused prospect generator of gold-silver projects.

Fortuna has done an outstanding job over the past decade of growing its reserve and resource base through exploration of existing projects and acquiring others.

Look for Fortuna to keep beating its recent production targets and fuel growth through expansion and exploration.

MAG Silver Corp. (NYSE: MAG) owns 44% of the flagship Juanicipio property in Mexico along with Fresnillo Plc., which owns the remaining 56%. Juanicipio is something of a freak of nature, with exceptionally high-grade ore at a whopping 600 grams of silver per ton, plus gold, lead, and zinc.

MAG continues to develop toward production on Juanicipio, with ventilation, access ramps, and underground development, along with mill procurement and construction to be completed by H1 2020.

There are now a total of twelve analysts covering MAG, and their average target price is about $17.70, while shares currently trade around $10.90, implying a target gain of about 62%.

Progress remains on track, with one of the richest silver mines approaching production.  Exploration could also provide a real kicker as silver prices rise.

SilverCrest Metals Inc. (TSXV: SIL) is my moonshot play. That of course means more risk, but it also means a much higher potential return. And so far, we haven’t been disappointed.

In February, I told you that a maiden resource estimate for the Las Chispas project was not far off. Well, we now have that – and it’s a doozie. Las Chispas is estimated to contain an inferred 402,000 ounces gold and 32,650,000 ounces silver, or 62,800,000 ounces of silver equivalent (AgEq), using a 150 gpt AgEq cut-off grade and minimum true vein width of 1.5 metres.

Since I recommended SilverCrest in February, shares are up 16%, and that’s while silver has actually gone down by 3.6%. I think SilverCrest will continue to surprise to the upside. So if you want the potential to multiply your investment many times over in the silver space, this explorer can deliver.

With the silver demand picture remaining bullish and silver deficits likely to provide support, these three junior silver companies are great options to gain a foothold in this market.

At our recent Bitcoin 20x Summit, we uncovered information that left many folks stunned – and re-evaluating everything they thought they knew about the crypto market.