A potential conflict between Iran and the United States is brewing, and the world’s fifth-largest oil producer could see its oil exports crushed. Iran sanctions could send oil prices rising in a hurry. We’ll show you exactly what to expect, including how you can make money off of the price action. 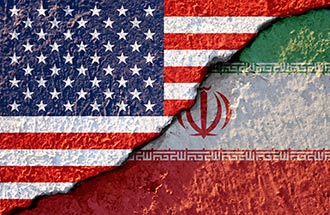 While Iran is the fifth-largest oil producer, and third-biggest producer in OPEC, it can threaten the Strait of Hormuz, a narrow passage in the Gulf of Oman where 20% of the world’s oil passes through.

Then came the June 20 downing of a U.S. military drone that Iran accused of violating its airspace.

And finally, on June 24, President Donald Trump ratcheted up economic sanctions on Iran to essentially cut off all Iranian oil exports, which are at the heart of the Iranian economy.

Naturally, this combination of events took a toll on the oil market, sending the price of West Texas Intermediate up 14.7% since its June 12 close. Should the situation escalate, and Iran further threaten the critical Strait of Hormuz, it could shoot up even more.

While this might be bad news for economies, such as Japan and China, which are heavily dependent on Middle East oil, it is actually good news for traders. It can be a catalyst to propel oil stocks higher.

THE ULTIMATE OIL PLAY: 548% in potential profits from a potentially endless stream of oil royalty checks designed to get bigger and bigger. Learn more…

In fact, Dr. Moors sees something else happening in the oil markets, and anyone invested in energy needs to know about it.

Major Catalysts for Oil in 2019

Back in April, Moors outlined two factors that will drive oil prices higher this year.

The first is that U.S. production is already priced into business operations. Weekly production totals will fluctuate but will not translate into a firm pricing ceiling, even in an overall rising production environment.

Second, oil prices will continue to be determined by demand someplace other than North America or Western Europe. Essentially, this means demand (and prices) will increasingly be driven by Asian demand, where the energy sector as a whole will progressively take its bearings until at least 2035 to 2040.

You see, oil demand should outstrip supply, even if by a small amount, and that by itself provides the oil market a boost. Notwithstanding occasional pressures on demand levels, the world’s biggest oil authorities agree about worldwide demand. The International Energy Agency, OPEC, the International Energy Forum, and the U.S. Energy Information Administration see demand setting records this year, increasing even faster than expected.

And if supply is restricted, thanks to increasing hostility and disruption in the Middle East, that can only add to the economic forces driving oil higher.

Here’s how Dr. Moors breaks it down and his oil price target for the summer…

Getting Your Piece of the Oil Price Action

Dr. Moors’ oil price prediction for 2019 is $72 a barrel, a 23% gain over today’s prices. And that could be greatly accelerated should an actual war break out.

That might be a little lower than you’d expect, but Moors is keyed into the global oil market and knows what’s moving prices. While the Iran situation has the potential to spiral out of control, oil traders are mostly taking a wait-and-see approach to the escalation. That means isolated incidents, like the oil tanker attack, aren’t going to send oil prices to $100 a barrel again.

But that doesn’t mean you can’t profit.

Short of buying a few dozen barrels of crude oil and stashing them in the basement, the best way to own oil is with the United States Oil Fund LP (NYSE Arca: USO). This exchange-traded fund holds the near-month NYMEX crude oil futures contract and rolls it over to the next month contract before expiration.

The most important point here is that the fund trades like a stock on the New York Stock Exchange. That means you can also buy and sell it the way you do with any stocks. Plus, it is highly liquid, trading 31.9 million shares per day on average.

And if it happens before the end of the year, as Moors’ projects, the annualized gain doubles.

The IRS “PAYS” YOU to get started. You can get an endless stream of oil royalty checks designed to get bigger and bigger as oil prices continue to rise. Plus, you could also earn a profit of up to 548% – enough to turn every $10,000 into $64,800 – in one simple move. Check out Dr. Kent Moors’ million-dollar secret HERE.