The future of cryptocurrency is here, and every investor needs to be prepared for all the changes it’s going to bring – not just to investing, but to nearly everyone’s daily life.

I just returned from the three-day Consensus 2019 cryptocurrency conference in New York. Although I have followed this space closely since 2011, when I first discovered Bitcoin, some of what I learned surprised me. 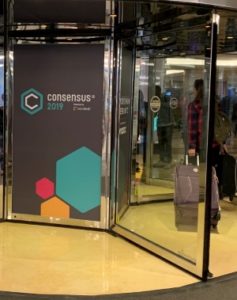 My big-picture takeaways are:

Yet the specifics are even more impressive. We’ll start with how blue-chip firms are turning to the blockchain to innovate…

The Future of Cryptocurrency Is Happening Now

Crypto products and services fall into two broad categories: those that are blockchain-based and those that serve the needs of trading cryptocurrencies as assets.

What struck me at Consensus 2019 was how many of these products and services have moved from development to reality – and how many household names are adopting the tech.

International Business Machines Corp. (NYSE: IBM) announced its blockchain-based platform for tracking food through the supply chain, the IBM Food Trust, last October. It allows producers to trace food from its origin though processing and distribution. 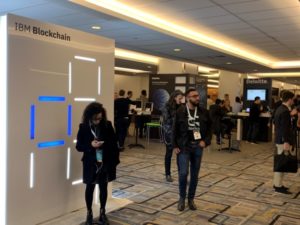 Food producers can use this data to streamline their systems, but the benefits go beyond that. Many consumers today want to know where their food comes from and how it’s produced. Plus, when tainted food ends up in grocery stores and restaurants, blockchain technology greatly speeds up the process of tracking down the bad items so they can be pulled before people consume them and get sick.

In a pilot program, IBM said it was able to cut the time it took to trace bad food from seven days to 2.2 seconds.

I also stopped off at Microsoft Corp.’s (NASDAQ: MSFT) booth at Consensus to learn about a similar “blockchain-as-a-service” product it launched less than a month ago. The company has linked the new tech to its rapidly growing Azure cloud service and counts such companies as Starbucks Corp. (NASDAQ: SBUX) and JPMorgan Chase & Co. (NYSE: JPM) among its customers.

At the same time, dozens of startups are solving problems that have served as roadblocks to the adoption of cryptocurrencies, particularly in the area of investing.

These companies are building the digital infrastructure of the future…

Several significant “pain points” have discouraged both individuals and institutions from putting more money into cryptocurrencies.

Here are the major areas where startups are creating solutions to those pain points:

These solutions will make investing in cryptocurrencies easier, but several regulatory pieces need to fall into place for crypto investing to become commonplace.

As these pieces come together, we’ll see a massive movement of capital into Bitcoin and other cryptocurrencies, driving prices up rapidly. 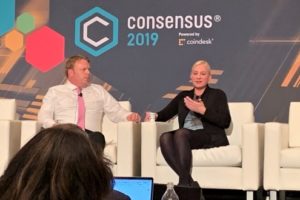 The first thing that surprised me was the number of regulators present at Consensus. SEC Commissioner Hester Peirce appeared for an onstage interview, as did SEC Senior Advisor for Digital Assets and Innovation Valerie Szczepanik (pictured).

Other government entities represented included the Commodity Futures Trading Commission (CFTC) and the U.S. Treasury. Two Congressmen were also there, Rep. Tom Emmer (R-MN), a co-chair of the bipartisan Congressional Blockchain caucus, and Rep. Warren Davidson (R-OH), a member of the caucus who co-authored the Token Taxonomy Act.

Listening to what they had to say, two themes emerged:

The regulators are in a tough spot in that they can’t rush new rules, and in some areas need Congress to craft new legislation (passing the Token Taxonomy Act would help greatly).

At the same time, there’s pressure to move forward because other parts of the world are ahead of the United States when it comes to regulating crypto.

The European Union has created a blockchain unit to assist crypto entrepreneurs as well as several other initiatives to push development of the technology. China prioritized research on blockchain technology in its most recent five-year plan. Many believe the United States is falling behind.

Maybe that’s why in a Consensus session on the likelihood of SEC approval of a Bitcoin ETF, Perkins Coie LLP Managing Partner Keith Miller predicted we’d see it by the end of this year.

Oceans of Money Waiting on the Sidelines

Rui Carvalho, the Global Head of Product Management for Connectivity and Feeds for Intercontinental Exchange (ICE), said in one panel discussion that a tradeable ETF and regulatory clarity were two of the four things institutional investors are looking for. (The other two were transparency and liquidity.)

Carvalho also said that despite the difficulties associated with cryptocurrency investing, 20% of institutional investors currently hold some crypto. That suggests a desire to own this new asset among a group of investors that could pour tens of billions, if not hundreds of billions, into the space.

Given Bitcoin’s history of parabolic increases, it’s not hard to see how such a catalyst, combined with everything else happening in the world of crypto and blockchain technology, could push the price of Bitcoin beyond $100,000 over the next couple of years.

While it’s easy to be optimistic in the wake of attending a major cryptocurrency conference, I believe such optimism is justified.

And it’s all starting to happen right now.

Move on 5G as fast as you can!

A NEW $12 trillion market could be about to burst wide open, igniting a crazy and relentless cash stampede!

And you could pocket tenfold gains from just one lucrative play – if you move NOW!