Illinois’ legislature just passed a bill legalizing marijuana in the state on Friday (May 31).

That means recreational marijuana will be completely legal in the state starting on Jan. 1, 2020. That will make Illinois the 11th state to fully legalize marijuana use and the biggest state since California to legalize cannabis.

This is just another sign of the incredible momentum behind the marijuana legalization movement.

But there’s even more to this story than another state hopping on the legalization bandwagon.

You see, Illinois’ push to legalize marijuana made history, and it has the potential to revolutionize the nation’s growing marijuana movement.

Today, we’re going to show you what Illinois’ push for legalization reveals about where the fight to legalize marijuana is heading next.

Illinois’ Legalization Could Open the Floodgates for Cannabis Profits

Following its passage though the state’s House of Representatives, Illinois’ bill to legalize recreational marijuana heads to the desk of J.B. Pritzker, the governor of the Land of Lincoln.

Pritzker, who won Illinois’ election for governor last November, made marijuana legalization a central tenant of his platform. As a result, he’s likely to sign it into law by the end of the week.

And that will be a historic moment for cannabis. 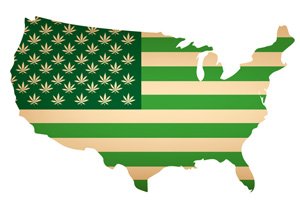 You see, after Pritzker signs the state’s marijuana legalization bill into law, Illinois will be the largest state to legalize marijuana through its legislature rather than a ballot initiative.

Before last week’s vote in Springfield, nine of the ten states that have legalized recreational marijuana did so though public ballot initiatives, leaving the decision to voters rather than state legislatures. Ballot initiatives are typically reserved for issues politicians are too afraid to touch.

Vermont is the only state to have legalized weed on the state house floor.

The key difference is that Illinois’ population is nearly 20 times that of Vermont. And it’s a sign politicians are finally realizing cannabis is a popular issue they can campaign on.

Plus, Illinois’ plan to tax cannabis could create even more incentives for politicians.

What’s really going to turbocharge the legalization movement is the tax Illinois intends to levy on legal marijuana sales.

According to reports, Illinois will tax marijuana sales at a rate up to 25%. This will generate millions in state revenue – and grab the attention of other state legislatures looking to line their states’ coffers.

In fact, there’s plenty of evidence that the potential windfall from marijuana legalization has other states seriously considering legalization.

According to Cuomo, his administration will “get marijuana done.” He continued, “It’s not a question of political desire, it’s a question of practical reality.”

This would make New York the largest state on the East Coast to legalize marijuana. And other state legislatures are unlikely to sit idly by while New York rakes in the profits.

This is certainly the case for New York’s populous neighbor, New Jersey.

While a bill to legalize marijuana failed in the state’s legislature earlier this year, the state is likely to push another bill to the floor of the legislature in the near future.

And New Jersey’s governor, Phillip D. Murphy, rode into office last November on the promise he would legalize marijuana in New Jersey before the end of his first term.

That’s a promise he is unlikely to give up on without a fight.

Both New Jersey and New York’s consideration for legalization in the legislature rather than at the ballot box indicates that politicians across the country are beginning to take full marijuana legalization more seriously.

And it’s not just the states that are starting to take legalization seriously. The battle for legalization is also heating up on Capitol Hill.

Earlier this year, New Jersey Senator Cory Booker introduced the Marijuana Justice Act – a bill that would legalize marijuana on the national level.

The bill is the first piece of legislation backing marijuana legalization that attracted significant traction in the Senate – it currently has the backing of six additional senators alongside Booker.

More importantly, all six of these additional senators are running for president in 2020.

Their support is sure to push the conversation about national marijuana legalization into the limelight – and make full-scale legalization all the more likely.

That’s why now is the perfect time to get in on the ground floor of the marijuana revolution.