The issues in the cannabis industry predate the COVID-19 pandemic. Over the past year, pot companies have generally delivered subpar financial results, and their performances on the stock market haven’t been much better. Aphria (NASDAQ:APHA), one of the largest cannabis companies by market cap, has also had its problems inlcuding attacks by short sellers and…

Aphria has seemed to put this episode behind it. Since August 2019, shares of the Ontario-based pot grower are down by 24.6%, compared with a decline of 52.1% for the Horizons Marijuana Life Sciences ETF (OTC:HMLS.F) — an industry benchmark; both have underperformed compared to the S&P 500, which is up by 18.45% over the same period. Is now a good time to buy shares of Aphria? Let’s look into the company’s most recent financial results, as well as its overall business, and decide. 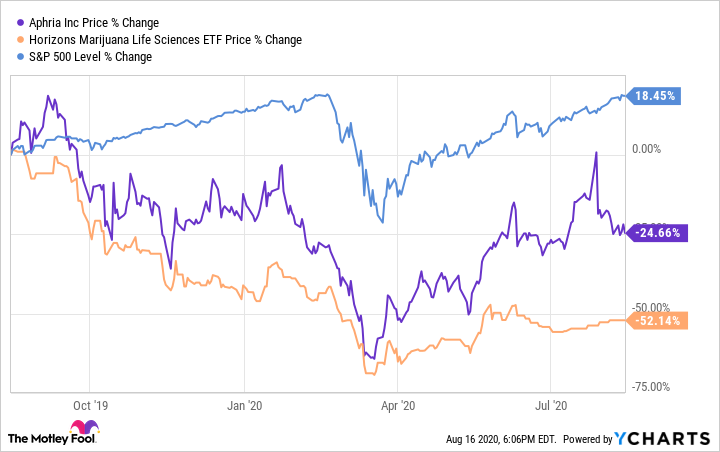 In 2018, short sellers alleged that company insiders had profited from Aphria’s acquisition of LATAM Holdings. Aphria funded this acquisition by issuing a little over 15.6 million of its shares and through the assumption of $1 million of LATAM’s debt.

But according to Hindenburg Research and Quintessential Capital Management, Aphria overpaid for this acquisition in an effort by some of its executives to enrich themselves. This debacle led to an independent investigation, Aphria’s then CEO, Vic Neufeld, resigning, and the company incurring a 50 million Canadian dollars impairment charge to the value of the assets it obtained through the misguided acquisition. These events have eroded investor trust in this stock, but some think it could turning things around.

On July 29, Aphria reported its fourth-quarter and full-year earnings for its fiscal year 2020, which ended on May 31. The company’s financial performance failed to impress investors. Its bottom line sunk during the fourth quarter, with the company reporting a net loss of 98.8 million Canadian dollars ($78.85 million), compared with the net income of CA$15.8 million it reported during the prior-year quarter. Investors sold off Aphria’s shares following its earnings release, but in my view, that may have been a bit of an overreaction.

An unexpected net loss isn’t great — for any company. But much of this loss was attributable to a CA$64 million noncash impairment charge on some of the company’s international assets. The company incurred this expense, which accounted for nearly 65% of its net loss, because of the COVID-19 pandemic’s negative impact on its operations abroad. Also, Aphria incurred another noncash expense of CA$27 million related to the revaluation of convertible debentures (a type of debt instrument that can be converted to shares of a company’s stock). Meanwhile, Aphria’s top line continues to grow despite the pandemic. During the fourth quarter, the company recorded net revenue of $152.2 million, a 5.4% sequential increase, and an 18.4% year-over-year increase.

Further, Aphria’s gross margin for the fourth quarter was 52.9%, which remained more or less flat year over year and increased from the 42.7% gross margin it recorded during the third quarter. Without the CA$64 million impairment charge, Aphria’s fourth-quarter total operating expenses would have been roughly CA$52.6 million, compared with CA$60 million during the prior-year quarter, and CA$50.9 million during the previous quarter. In short, Aphria’s latest earnings report wasn’t great, but it wasn’t a complete disaster that warranted a 19% drop in its stock price.

At the start of 2020, all eyes were on the cannabis derivative market, also known as Cannabis 2.0, which officially opened on Oct. 17, 2019 in Canada. And although the…

← Why is GrowGeneration Skyrocketing This Week?
Why Aurora Cannabis Stock Got Smoked on This Week →