Curaleaf Holdings (OTC:CURLF) is a top multistate marijuana operator in the U.S., with 106 dispensaries and operations in 23 states. With an aggressive growth strategy and rapidly ascending sales numbers, it has captivated investors and been a popular option for those looking to tap into the industry’s growth potential…

But with a market cap of nearly $10 billion, has this licensed producer become too expensive to invest in today? Below I will look at its most recent quarterly earnings report, its future, and whether it’s still a good buy.

On May 10, Curaleaf reported its first-quarter results for fiscal 2021. Revenue of $260 million for the period ending March 31 was a new record for the company, up 170% from the prior-year period. If it can maintain this level of sales, it will be on track to easily hit the $1 billion mark in annual revenue for its current fiscal year. Its sales in 2020 totaled $627 million.

The one negative is that the company’s growth rate is slowing down, as its top line is only 13% higher than the $230 million that Curaleaf reported in the fourth quarter. In the previous period, its quarter-over-quarter growth rate was 26%. And in the period before that, its sales were up 55% on a sequential basis.

That said, a slowing growth rate isn’t all that unexpected given how big Curaleaf has gotten; growing sales at a high rate is much more difficult when a company’s top line is already large.

There are still plenty of opportunities for even more growth

Curaleaf isn’t a stock I would worry about it when it comes to growth. While sales may look like they are approaching a peak, with New Jersey and New York recently legalizing recreational marijuana, Curaleaf should continue to smash records and post even stronger revenue numbers in the coming year. Curaleaf Executive Chairman Boris Jordan noted in the earnings release that in both New Jersey and New York, the company leads in market share (for medical marijuana). And in Q1 it raised $300 million for the purpose of scaling its operations, particularly in these and other states where the recreational markets will soon open up.

The company anticipates that for the second quarter, its revenue will be between $305 million and $315 million, putting its quarter-over-quarter growth potentially back up to over 20%. Curaleaf has launched several new products, including its Select Squeeze beverage enhancer, which will help give its sales numbers an added boost. CEO Joe Bayern also made some ambitious projections for the latter part of 2021, predicting that the business will post positive net income and operating cash flow. It’s important to note that while the company posted an adjusted EBITDA profit of $63 million in Q1, its net income was still a negative $17 million.

How does its valuation look with these new numbers?

Over the trailing 12 months, Curaleaf has now generated roughly $789 million in sales With a market cap of $9.7 billion, the company is now trading at an updated price-to-sales (P/S) multiple of 12.3. This is how that compares with other multistate operators: 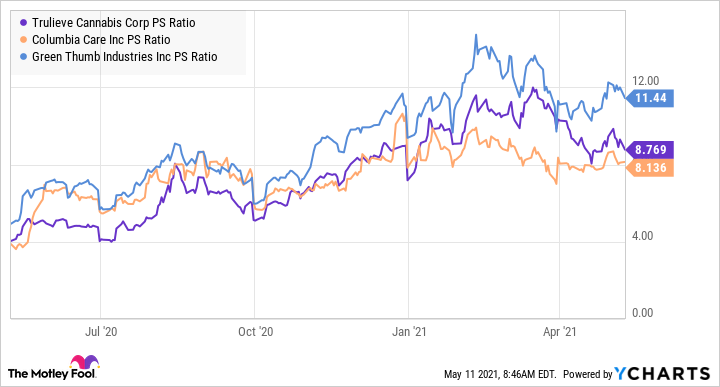 Curaleaf stock remains at a premium even with its latest sales numbers. However, that doesn’t necessarily make it a bad investment, as investors are typically willing to pay more for a high-growth company like Curaleaf that is dominating the industry.

Should you invest in Curaleaf?

Its sights are firmly set on New Jersey and New York, and I wouldn’t doubt that there is significantly more growth ahead for Curaleaf. And although it isn’t the cheapest pot stock you can buy right now, value is…

← Canopy Growth (CGC) Is Down More Than 50% From Its 52-Week High: Is Now the Time to Buy?
Why Aurora Cannabis Stock Sank Friday →