Last night, computer security pioneer and cryptocurrency guru John McAfee called out Dimon for attempting – and failing – to “end crypto.” McAfee lobbed a slew of accusations at the big banker via Twitter, pictured below. 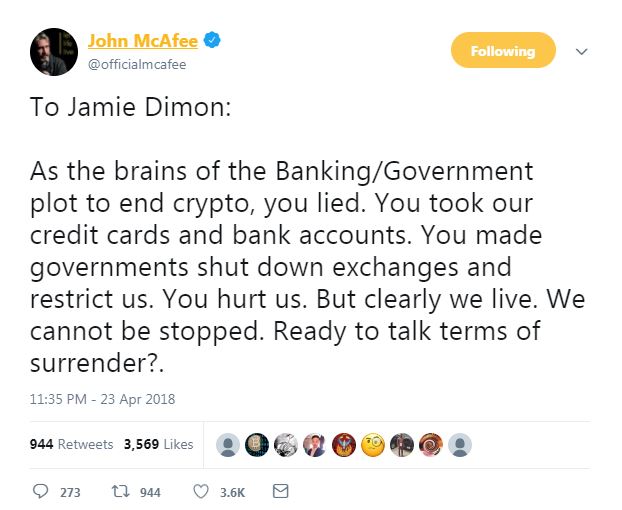 While we also disagree with Dimon’s stated take on Bitcoin, the evidence suggests that his “plot” isn’t to end crypto at all.

In fact, it could be just the opposite.

Here’s how Dimon has enraged crypto supporters like McAfee, what he could really be up to, and how you can profit…

McAfee’s charge that Jamie Dimon “lied” likely refers to instances during which the mega-banker “misled” investors and even the government over actions made by his firm in recent years.

For instance, JPM’s role in the 2008 financial crisis involved underwriting fraudulent securities in the years leading up to the Great Recession. Those very investments were built by a unit within JPMorgan that operated on lies made to shareholders. Eventually, the unit’s activities resulted in $2 billion in trading losses – a heavy contribution to the crisis 10 years ago.

Massive Upgrade Could Send Bitcoin to $100,000 – Click Here to Learn About the Opportunity That Could Deliver a Million-Dollar Payday to Investors Who Act Now

Such was the case on Sept. 12, 2017, when Dimon told attendees at a conference presented by CNBC that “Bitcoin is a fraud” that will “eventually blow up.”

McAfee countered the very next day.

“You called Bitcoin a fraud,” McAfee told CNBC‘s “Fast Money” the day after Dimon’s declaration. “I’m a Bitcoin miner. We create bitcoins. It costs over $1,000 per coin to create a bitcoin. What does it cost to create a U.S. dollar? Which one is the fraud? Because it costs whatever the paper costs, but it costs me and other miners over $1,000 per coin. It’s called proof of work.”

While we don’t stand by the implication that the U.S. dollar is fraudulent, we agree that calling the digital asset a “fraud” simply doesn’t make sense. If Bitcoin is a “fraud,” that would mean there are fraudsters manipulating its price movements.

But there is no one single person or group of people “behind the Bitcoin curtain”; rather, the digital coin’s price fluctuations are dictated by its community.

But here’s the kicker: We’re betting that Jamie Dimon knows that, too. He wouldn’t be the only Wall Street banker to badmouth Bitcoin in an attempt to buy it at lower prices. And we know that JPMorgan Chase is working on crypto technologies.

In fact, he may just be waiting for the “fix” that’s coming for Bitcoin – the upgrade that would be like adding twin turbos to the Bitcoin engine.

At our recent “Bitcoin 20X Summit,” we uncovered information that left many folks stunned – and reevaluating everything they thought they knew about the crypto market.

You see, while Wall Street and Fortune 500 companies continue to badmouth Bitcoin, they’re diving headfirst into this craze… and I’d bet not one in 10,000 people knows the reason behind it.

← This Bitcoin Analysis Predicts a Price of $11,000 by June 30
Why the Price of Silver Is So Volatile, and Where It’s Headed Next →