Marijuana futures could be one of the next major developments in the cannabis investing space. Today, we’re going to show you everything you need to know about this market’s potential, including whether it’s worth waiting for.

Futures might sound complicated, but they work fairly simply in practice.

A futures contract allows a seller and a buyer to lock in a price for commodities at a future date. For example, if a large pumpkin sells for $5 in October 2018 and a farmer is worried there will be an oversupply of pumpkins in 2019 and prices will drop, they can enter a one-year futures contract for $5.

This gives them the right to sell their pumpkin for $5 in one year. Even if the market price of pumpkins falls to $3 in October 2019, the farmer is still able to sell his pumpkins for $5 thanks to the contract.

But let’s say prices don’t fall and go up in 2019 to $7 per large pumpkin. Pumpkin buyers’ part of the one-year futures contract will come out ahead because they are able to pay $5 instead of the going rate of $7. 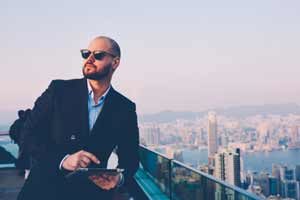 Now this futures market is coming to the marijuana industry.

Eventually, the price of marijuana plants could have a futures contract, opening up a completely new segment for investing in the $10 billion industry.

And when it comes to speculating on future prices, there’s a lot of money to be made…

But investing in futures is also risky…

If you don’t know what you’re doing, you could lose all your hard-earned money.

That’s why as we roll closer to the potential of marijuana futures, I wanted to make sure our readers were well prepared. So I spoke with futures market expert and Money Morning Economist Garrett Baldwin.

SIT THIS ONE OUT and you could miss an American economic revolution that could send three little pot stocks soaring up to 1,000%. Click here to see why…

Garrett is an international economist and competitive intelligence specialist based in Chicago. He’s covered futures markets, hedge funds, and private equity for a decade.

He is a graduate of the Medill School of Journalism at Northwestern University. He also holds a Master’s Degree in Economic Policy from Johns Hopkins University, an MS in Agricultural Economics from Purdue University, and an MBA in Finance from Indiana University.

He not only shared the challenges marijuana futures have, but why it may be several years before we see them hit the market…

Exclusive Insight About Marijuana Futures from an Expert

Jack Delaney: Could you give an overview of how trading marijuana futures would work, and what it means for retail investors?

Garrett Baldwin: Imagining a world where marijuana futures are traded is not very hard. Growers and buyers would use futures as a mechanism to hedge against price volatility.

Growers would want to lock in the best price to sell to turn a profit, and buyers in kind want to ensure they’re able to lock in contracts in the event of shortages.

But there’s a catch here that I think a lot of people need to think about, and I want to emphasize that we’re a long way off before investors can get in on marijuana futures.

We’ll get into the details in a minute.

My advice: Wait this one out for quite some time. It is going to be difficult to know what U.S. commodity exchange would be home to marijuana futures should the government decriminalize cannabis on a national level.

That would be step one.

I had a conversation with Money Morning Special Situation Strategist Tim Melvin about this, and we both agreed that Kansas City’s exchange might be the best location.

My concern is that some old, crusty Hard Red Wheat trader is going to come right in and start taking all of the people who thought there’d be a fortune in marijuana futures to the cleaners.

The futures market isn’t what it used to be, with fistfights in the pits and whiskey-fueled apologies.

But to be clear, it’s still cutthroat, so retail investors hoping to make easy money should stay away.

JD: What challenges does the marijuana market face in trying to get futures listed?

GB: Getting back to that catch I spoke about earlier, there’s the big challenge, the bigger challenge, and then the biggest challenge.

The big challenge is that marijuana has to be fully legalized in the United States. Cannabis was legalized in Canada on Oct. 17, so maybe Winnipeg’s commodity market becomes a test center for this idea.

But keep in mind that it’s not that huge of a market to begin with.

That’s where the bigger challenge comes in.

Futures markets are all about interchangeability.

If I’m trading corn, I don’t care if it’s from Indiana, Iowa, or even Brazil. You can put three stalks of corn in front of me, and I can tell you the grade.

But I probably can’t tell you where it’s from when I eat it.

With marijuana, a lot of growers like variability. They have different strains and different standards.

If I were buying 100 pounds of marijuana from a grower in California right now, it’s going to be radically different from what another grower would be doing in Nevada.

Marijuana is a craft product, which makes a futures market effectively useless.

To make this work, you would need to get a large number of growers all creating the same standardized crop.

And maybe you can do that.

Maybe if marijuana were legalized nationally, the FDA or a government agency would create such requirements. It is not out of the realm of possibility that some centralized planner comes in and says that many different strains of marijuana are a waste of resources.

That’s what centralized planners do with private resources.

But even if you get to that point, that brings in the biggest challenge: size of the contract.

How large would the contract size for marijuana be? Would it be 140 tons of marijuana?

How are you going to move all of that marijuana?

You’ll have bootleggers chasing those trains for miles.

As of right now, just figuring out a contract size and creating a safe delivery system would be a massive headache.

GB: Two years ago, I would have said hemp. Now, I’m going to say marijuana.

A block away from my office by the Chicago Mercantile Exchange, there was a company called Seed CX. They listed themselves as a Swaps Execution Facility (SEF) for three contracts that included hemp.

They were able to operate because of the 2014 Farm Bill Act, which permitted industrial hemp production in all 50 states. That gave them the regulatory infrastructure that they needed.

But Seed CX walked away from the hemp market and pivoted to cryptocurrencies. I get the sense that even though they launched for the purposes of being the place to get hemp futures off the ground, they realized that there isn’t a big enough industrial market for hemp that buyers and sellers are constantly seeking to hedge on price.

JD: How long do you think it will be before we see marijuana futures listed?

GB: In the United States, the federal government needs to deregulate it. I personally think that marijuana is going to be decriminalized by a constitutional amendment or removal from Schedule 1 by 2022.

At that point, we’d need two years of grower data to get a sense of the market and start pricing it in.

And if it’s not legal nationally by then, expect marijuana to be a major voting issue on the national level.

I’d like to thank Garrett for his time and providing the type of expert insight you aren’t going to find anywhere else.

After talking to Garrett, it sure doesn’t sound like marijuana futures should be viewed as a way to make a quick buck for retail investors.

But that doesn’t mean you’ve missed out on the chance to bag life-changing profits from cannabis legalization.

Before you go, I had to make sure you were able to access all the details about a special profit opportunity in the cannabis industry…