Mexico could completely legalize marijuana by next week. And marijuana legalization in Mexico has the potential to be as big of a catalyst for marijuana stocks as Canada’s legalization movement. 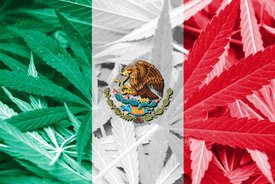 A bill to legalize cannabis will be ready for a vote in the Mexican Senate by the end of this month, as the self-imposed deadline of Oct. 23 is fast approaching. This is a big opportunity for investors to get in on cannabis before another major catalyst hits, making right now one of the best times to be a cannabis investor.

Just look at what happened after Canada legalized cannabis in October 2018.

The Alternative Harvest ETF (NYSEArca: MJ) surged nearly 50% between August and October 2018. But individual cannabis stocks did even better.

Keep in mind that Mexico is the world’s 15th largest economy, just behind Canada at No. 10.

What this also means is that the United States will be sandwiched by two cannabis-friendly countries, which could hasten full U.S. legalization.

But the law isn’t a done deal yet. Here’s what’s going on behind the scenes, plus the one stock you need to own ahead of Mexico’s marijuana legalization.

This is the only company we’re tracking that is tapped right into the Mexican cannabis market, and it offers 140% upside.

And that’s before Mexico legalizes cannabis…

Why Mexico’s Cannabis Law Is a Game Changer

Mexico’s legalization of marijuana is all but inevitable.

Last year, the Mexican court ruled that the ban on personal possession, use, and cultivation of marijuana was unconstitutional and that the laws must change by this October. Mexican lawmakers expect approval within a previously set Supreme Court deadline to end cannabis prohibition on the federal level.

In other words, the court already put the country on the path to legalization for adult use.

If everything goes according to plan, the Mexican market could be worth $2 billion, according to New Frontier Data. Another estimate puts it at $12 billion by 2029.

Medical marijuana has been legal in Mexico since June 2017, and Grandview Research expects this subsector to continue to grow at a compounded annual rate of 27.7%. Indeed, major cannabis companies are already working to capitalize through direct operations and acquisitions.

But one company is one step ahead of its rivals…

The Best Stock to Ride the Mexican Cannabis Legalization Wave

One of the best ways to take advantage of a coming trend – or change in the law – is to own a company that’s already established in Mexico. Our favorite stock with Mexican cannabis exposure is Aurora Cannabis Inc. (NYSE: ACB). Plus, it’s simply one of the best cannabis stocks to own right now.

For starters, valuations for all cannabis stocks have come way down from the excitement levels that existed when the media was first catching on to cannabis’ health and wellness uses. Growth outlooks remain intact despite weaker stock prices, too.

Aurora operates in 25 countries around the globe with a thriving consumer business and extensive medical operation. It is also very deep into CBD wellness products, which allow it to ride that boom here in the United States.

It is the global leader in production capacity, with over 600,000 kilograms annually. Aside from direct sales, this sort of capacity makes it an ideal partner for other cannabis companies in need of supply.

In Canada, what’s now called “Cannabis 2.0” is coming this week as the nation finally legalizes cannabis-infused beverages, edibles, vapes, and similar products. That should be another huge catalyst for growth – and for the stock.

The question investors might have now – and they should ask it – is why the stock has been so weak over the past few months.

Pot stocks in general have been weak, in part as some analysts question whether the sector is ready for prime time. However, we don’t question that. We know cannabis is here to stay, and the action we’ve seen in the sector really amounts to fear by the public.

The current issues with vaping are just one of the excuses people might have for selling their cannabis holdings, but we view it as throwing the good out with the bad. The vaping problem seems to be with black market, flavored vapes, and not with legal, regulated cannabis. But Aurora and other companies are hedging their bets with a new focus on cannabis edibles.

Everyone else’s panic is our treasure chest of value.

From the technical point of view, cannabis, and Aurora in particular, has been sold off excessively – far beyond what the fundamentals might suggest. Aurora is now 42.6% below its 200-day moving average, and using the language of the technician, that is quite oversold. In other words, the stock is stretched too far below its mean and is ripe for a short-term bounce-back, at a minimum.

With such a low dollar price, this could be a stock to tuck away in the portfolio and be extremely pleased in a year or two when it explodes higher again. And Mexico’s legalization could be just the catalyst Aurora needs to soar back to its highs again.

Wall Street analysts are already giving the stock price targets over $9 a share, a 140% gain from today’s share price of $3.75 a share. Bringing the 15th largest economy in the world into the legalized cannabis market could lead to a much bigger windfall too.

And there are even more opportunities here.

While Aurora has a direct connection to the Mexican market, it’s also one of the biggest names in cannabis. In other words, most cannabis investors already know about Aurora and its potential.

But we have an even more exclusive pick…

It’s making a move into the Mexican market, and it’s still flying under the radar.

The National Institute of Cannabis Investors‘ NICILytics tool gives it a rating of 5 – its highest rating – which means it has all the traits of a breakout cannabis stock.

← Will a Terrible Year For Pot Stocks Get Even Worse?
Here’s Why Pot Stocks Are Surging Today →