Which stocks hold the potential of doubling this year? Many investors would probably put marijuana stocks high on the list. I certainly would…

Delivering a return of 100% or more within 12 months is a fantastic accomplishment. But one pot stock just pulled it off in only two weeks. Meet the marijuana stock that has already doubled (and then some) in 2021: Tilray (NASDAQ:TLRY).

I suspect that few investors would have picked Tilray a few months ago as the early winner among pot stocks in 2021. After all, the Canadian cannabis producer had a disastrous 2020.

Tilray’s shares lost more than 50% of their value last year. The COVID-19 pandemic caused the stock to plunge in the first quarter. It also negatively impacted Tilray’s sales, especially in the second quarter. The company reported that its overall revenue fell in Q2 compared to Q1. This decline stemmed primarily from lower Canadian recreational and medical cannabis sales related to the pandemic.

The coronavirus-related sell-off was difficult to overcome. Although Tilray’s shares rebounded somewhat, they never came close to regaining the highs set earlier in 2020. 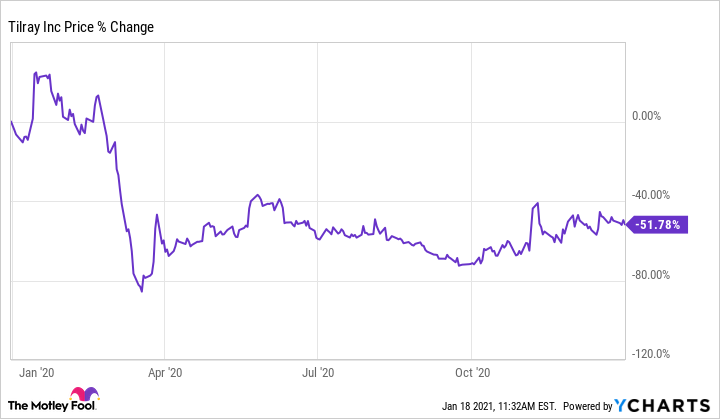 The company had more problems than just the pandemic. Tilray continued to lose money quarter after quarter. In May, the cannabis producer shut down its High Park Gardens facility to cut costs. It also issued more shares in March to raise additional cash, a move that further diluted the value of existing shares.

By the first two weeks of 2021, though, Tilray stock had soared nearly 125%. Its shares are now up close to 140%. What changed for Tilray to make this such a happy new year? The seeds for the surge were planted in the final two months of 2020.

Most importantly, Tilray and Aphria (NASDAQ:APHA) announced on Dec. 16, 2020, that they planned to merge. The proposed transaction was an intriguing one. The combined entity will retain the Tilray name. However, Aphria shareholders will own 62% of the company, making the deal a reverse acquisition of Tilray by Aphria.

Investors didn’t immediately react positively to the Aphria-Tilray combination. Tilray’s shares continued to slide over the last couple of weeks of 2020. However, there was another catalyst on the way that was set up a couple of months earlier.

In November, no candidate in Georgia’s two Senate races received more than 50% of the total vote. This meant that run-off elections were necessary for both seats and were scheduled for Jan. 5, 2021. Democrats won both races, giving their party effective control of the U.S. Senate in the process.

Canadian marijuana stocks, including Tilray, skyrocketed on the election results as investors are anticipating that a Democratic-controlled U.S. Congress will move toward decriminalization of marijuana at the federal level. Although this wouldn’t mean national marijuana legalization in the U.S., as is the case in Canada, it would open the doors for Canadian companies to enter the lucrative U.S. cannabis market.

The following week after the…