Every now and then an idea comes along that revolutionizes an entire industry. Today we call that “disruption.”

But disruption can happen on a number of levels. Sometimes it can be so subtle it takes years or even decades to be fully recognized for what it is.

It doesn’t always have to be groundbreaking, either – often it’s simply a tweak or a re-think of an existing idea that just… opens the floodgates.

And nothing is ever the same again.

That’s exactly what happened to the world of resource financing in the early 1980s, when the royalty business model, then commonplace in oil and gas, was applied to the gold mining sector.

A brand-new, high-profit investment was born.

Today, royalty/streaming companies thrive, and so do their investors.

It’s an investing segment no investor can ignore – especially now, at the start of a secular gold bull.

Over the next few years, royalty/streamers will be generating fortunes for those shrewd enough to claim a stake right now.

How This Brilliant Idea Works

Then, in 1985, they acquired the Goldstrike mine royalty, and that marked the start of their focus on royalties.

The company was eventually sold to Newmont Mining Corp. (NYSE: NEM) for $2.5 billion, after generating more than 30% annually for investors since 1983, dwarfing stock market returns.

Those are tremendous, outsized gains that stem from a highly efficient business model coupled with great management.

But it all starts with the royalties themselves. So let’s look at what they are exactly.

In the context of mining, a royalty can be described as a right to receive payment for a percentage of a mineral to be produced from a mining operation.

There are at least six different types, but the most common is the net smelter return (NSR) royalty.

With the NSR, a specific percentage of the gross revenue from mining is paid to the royalty holder after a proportionate share of refining, smelting, transport, and insurance costs have been deducted.

A twist on the royalty is the “stream.” A metal stream is an agreement whereby an upfront deposit is made in exchange for the right to purchase some or all of the future precious metals produced by a mine at a determined price. This is usually at a substantial discount to the market price.

Now consider that most metal-bearing deposits are what’s called “polymetallic.” That is, they hold more than one metal mixed in with the ore.

Now, usually one of these metals, like gold or silver, is in much smaller concentrations than the others. By selling off that future production for an upfront, often sizeable cash payment, the miner can use those funds to pay for the development of their mine and concentrate on their main product.

Essentially, the agreement allows both parties to “unlock” the value in the precious metals.

That’s a great win for the miner, but here’s the beauty of this business model for the royalty company: Once the upfront cash payment has been made, there is no further responsibility toward funding exploration, advancement, permitting, construction, or expansion costs.

Also, such agreements will often provide for “optionality,” which means the royalty company stands to benefit from all the upside of payments for the life of the mine (often longer than initially planned) as well as exploration discoveries, which can add substantially to future output.

In fact, both of these benefits could mean exponentially more cash flow – without so much as an extra dime in additional costs.

What’s more, royalties and streams are typically attached to the properties or metals themselves, not the company operating the mine or exploring. If that company goes bust, the claim on those assets remains intact.

Royalty companies tend to be relatively lean operations. They do require a team of experts to evaluate projects, develop financing arrangements with miners, and manage the company. But the very nature of the business model means massive cash flow.

The First Is Still the Best (and My Favorite)

So my favorite pick in the space right now is none other than Franco-Nevada.

Aside from being the innovator that opened the streaming/royalty “floodgates,” it’s a $13 billion leader in the royalty sector.

Franco-Nevada boasts 376 assets, of which 50 produce minerals, 36 are advancing toward mineral production, 208 are mineral exploration, 57 produce oil and gas, and 25 are oil and gas exploration.

The following chart shows Franco-Nevada’s dramatic outperformance of both gold and the S&P/TSX Global Gold Index between December 2007 and December 2017. 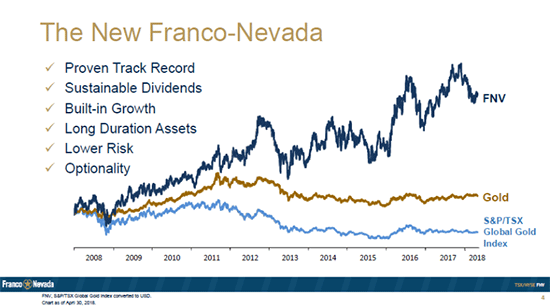 That’s an 18% compounded annual return since inception (December 2007 – more on that in a second), versus 5% for gold bullion, through what was a difficult, multi-year bear market for gold.

Between 2007 and its 10-year anniversary last December, Franco-Nevada’s gold reserves doubled on the same assets at no cost. And there’s plenty of near- and long-term organic portfolio growth ahead.

Topping things off, Franco-Nevada yields a respectable 1.3% dividend at its current price.

The bottom line is this: The royalty model is extremely attractive – irresistible, arguably – because it’s a safer and more diversified option to invest in the precious metals space than gold miners.

By selectively financing many early stage projects, royalty companies are subject to much lower risks while benefiting from very low costs and potentially unlimited upside.

And, as you’ll see when you take a position, the benefits to investors are impressive as well.

The “Buy” Signal Is Flashing on This Crypto Trade

Now he’s seeing the “Buy” signal on a cryptocurrency trade he thinks could turn a small stake into more than $40,000, based on his analysis.

In a special video presentation, Tom walks you through the process for placing this crypto trade. You’ll get the name of the coin, watch Tom make the trade, and get all the key details – at no cost and in under three minutes.

He’s expecting this little-known coin’s price to surge very soon – and everyone holding it beforehand could see massive profits. Everyone else… they may have to miss out.

← Gold Prices Are About to Get a Boost Thanks to the Trade War
The Blunt, Off-the-Cuff Truth About Marijuana Stocks →