Bitcoin is not a Ponzi scheme.

If one is to truly allege that the digital asset is little more than a massive ploy to defraud unwitting investors of their money, à la Bernie Madoff, then one must admit that the entire stock market itself is one giant hustle, too.

And people don’t make that connection. Because it’s not true.

Bitcoin is, in fact, a legitimate and potentially life-changing part of a speculative portfolio.

And our crypto expert can prove it…

Here’s Why Bitcoin Is Not a Ponzi Scheme

Money Morning Cryptocurrency Expert – our guide on all things Bitcoin and blockchain – David G. Zeiler wrote in depth about this common misbelief in 2015.

In the years since, he’s seen various Bitcoin-related scams play out. 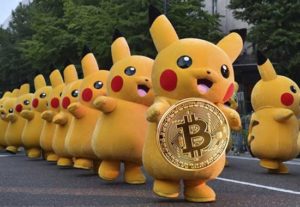 But he fervidly points out to this day that the digital asset itself is not a Ponzi scheme.

For starters, David says that when Madoff launched his Ponzi scheme in the 1990s from his existing investment firm, he promised – and delivered – high returns for years by using newer clients’ money. He covered his tracks with false trading reports.

Bitcoin has none of the attributes of such a scam.

For one thing, “Bitcoin itself can’t be a Ponzi scheme because it isn’t controlled by a central person or group,” David says.

Indeed, a central operator skimming money from clueless investors is a key requirement for something to be a Ponzi scheme – and Bitcoin clearly does not have one.

“No one is paying off existing investors with new money,” David adds. “People buy Bitcoin, like any other cryptocurrencies, like they would a stock. Whether you gain or lose money on Bitcoin depends on the price when you buy and the price when you sell – just like it does with stocks.”

Another key requirement for a Ponzi scheme is a lack of transparency – essential to keep those being fleeced in the dark.

“But Bitcoin is one of the most transparent financial systems ever devised,” David explains. “Every transaction is recorded in the public blockchain, the common digital ledger that’s shared over the Internet. Anyone can look up any transaction on the blockchain, even months or years after it took place.”

The Cryptocurrency Everyone Else Will Regret Not Owning: To See Tom Gentile’s No. 1 Crypto Pick and Exactly How to Trade It, Click Here Now

Lastly, David points out that, in Ponzi schemes, investors are promised to be regularly paid high returns. “There are no such guarantees with Bitcoin. Anyone who buys Bitcoin takes a risk as they would with any other investment, be it stocks, bonds, or commodities.”

But our crypto expert does add a warning about crypto Ponzis…

“That’s not to say you can’t have Ponzi schemes that involve Bitcoin or cryptocurrencies instead of dollars,” he says.

Here’s how you can avoid the scams…

There Are Bitcoin-Related Ponzi Schemes

Crypto pyramid ploys do exist, but they are separate from the cryptocurrency networks and operate pretty much the same way as any Ponzi scheme.

For instance, David says, “you have the problem of some initial coin offerings (ICOs) being outright scams.”

Indeed, ICOs are a way for startups to crowdfund a crypto investment. Instead of raising cash from venture capitalists like businesses do with initial public offerings (IPOs) on the stock market, a company can hold an ICO.

An ICO allows investors to invest in a cryptocurrency, such as Ethereum or Bitcoin, in exchange for a new token that’s being issued by the startup. But this new cryptocurrency is not equity. Instead, it can be used in exchange for future services offered by the company. And in some cases, the new digital coin may climb to a much higher value than its initial investment.

ICOs, however, are largely unregulated – which makes them ripe for Ponzi scams.

One such racket went down in February…

The ICO was for a supposed startup called Giza, which claimed to be developing “a super-secure device that would allow people to store cryptocurrencies,” CNBC reported today (March 12).

Giza carried out its ICO in January and immediately started garnering major investments. One person who put money into the project told CNBC today that they invested $10,000 worth of Ethereum, and another said they had put in around $5,000 worth.

At the beginning of February, Giza held more than 2,100 ethereum coins, which at the time were worth a total of $2.4 million, CNBC stated.

Now, all but $16 worth Ethereum of that $2.4 million cache are missing.

“In these cases, the operators just take the money and run without bothering to set up a Ponzi scheme,” David says.

Still, their “pump-and-disappear” trickery bears a strong resemblance to a Ponzi scheme. And both leave cryptocurrency investors with big losses. “Unfortunately, these Ponzi schemes and scams reflect badly on Bitcoin, even though they’re nothing new to the world of investing,” David says. “People do need to careful about who they deal with – just like they would with their U.S. dollars in the non-digital world.”

Last year, Tom Gentile used his pattern-trading software to help give his readers a shot at beating the S&P 500.

Now he’s using that technology to help pinpoint recommendations in a market that grew 164 times faster than stocks: cryptocurrencies.

The windfall of profits he expects is staggering.

Click here to learn more about Tom’s system – and see the No. 1 cryptocurrency he’s buying right now on camera!