A war is brewing between Saudi Arabia and Iran. And the effects have rippled across the oil market. The CBOE Crude Oil Volatility Index (OVX) has surged 63% since hitting its yearly low in April.

But while speculators try to make a quick buck on what happens next in the Middle East, you could still bank 111% over the next 12 months with one of the best MLPs to buy.

The reality here is that the world needs oil, and it’ll need it for a long time to come. And the United States is the biggest oil producer. 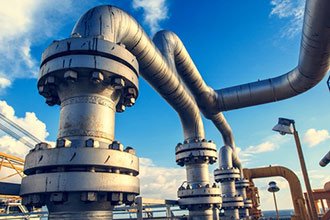 In fact, since the hostilities in the Middle East have begun to ramp up, the American Petroleum Institute (API) says U.S. oil inventories have soared by 10.5 million barrels to 432.5 million barrels.

The API also projects the United States will only continue to increase oil production for the next two decades.

That means there’s money to be made in oil no matter what happens.

Instead of trying to pick which oil firms are going to have the most profitable oil wells, savvy investors will shift their attention to midstream firms that transport and store the oil.

You Can Make a Killing in the “VIP” Market: The open market can only do so much – the real wealth is built in the private sector. Now you can tap into life-changing windfalls before they potentially go public. Click here to see how…

That’s where our top MLP to invest in comes into play.

You see, oil MLPs exist in the midstream sector. They transport and store oil in thousands of miles of pipeline across the United States.

MLPs don’t have to deal with the risks and expenses of exploring for and refining oil.

The best part is that our Money Morning Stock VQScore™ system has found one top MLP to invest in. It earned one of our highest scores, confirming its 111% upside potential.

And the best part about it is that it pays a 9.7% dividend yield…

One of the Best MLPs to Buy Right Now

One of the top MLPs to buy now is Energy Transfer LP Unit (NYSE: ET).

Since Energy Transfer is an MLP, over 90% of its revenue comes from the energy sector. More specifically, it has pipelines for transporting and storing natural gas (like propane) and oil.

That suggests a bullish outlook for the firm. And with a VQScore of 4.4, it’s really no surprise.

There are a few factors behind the optimism surrounding this MLP, too.

And it’s expected to grow its revenue to $59.8 billion by the end of the year.

What’s driving its growth is the fact that it has 86,000 miles of energy infrastructure across the United States. And last year alone, 30% of all U.S. oil and natural gas was transported on its pipelines.

Plus, it announced its acquisition of SemGroup Corp. (NYSE: SEMG) for $5 billion on Sept. 16 to increase its pipeline network size and obtain more processing plants, storage facilities, and deep-water terminals.

Initially, investors reacted bearishly following the news. There was worry that it would impact the company’s debt.

But Energy Transfer reassured shareholders that the buyout would greatly expand the firm’s transportation and export capabilities. In fact, the company said it forecasts saving $170 million per year as a result.

All of that’s on top of its new and existing projects, like its Lone Star Express expansion. Energy Transfer announced the expansion in July 2019. And according to Energy Transfer, it’s creating another 362-mile pipeline throughout Texas.

With the expansion, the firm says it’ll be able to take care of operational constraints from the Delaware and Permian basins – which, in turn, will improve its personal growth as well as the industrial and regional growth of the oil sector.

In fact, the new pipeline will result in $5 million worth of taxes for the 14 counties it spans across. Plus, the company also touts that it’ll generate new jobs for those working in construction.

So, since Energy Transfer is a huge U.S. oil storage and transportation company with tens of thousands of miles of pipeline and with facilities all across the United States, it could bank billions from the rising U.S. oil production volume of 13.23 million barrels a day.

Right now, Energy Transfer is trading for $12.80 per share. But with a high price target of $27, it could grow as much as 111% over the next 12 months. All of its growth potential, investor optimism, expected earnings prospects, and its massive 9.7% dividend make this a great MLP to profit from the U.S. oil market.

Robert Herjavec: Indisputable Proof That Anybody Can Generate Wealth Through Investing in the Private Sector

When the Angels & Entrepreneurs Summit launched, it was planned to only include a small group of guests to join guest “Shark” Robert Herjavec… but then something truly shocking was revealed.

During this clip (about halfway through the event), indisputable proof that anybody can transform their life through angel investing was revealed.