We’ve just capped off a big week for both gold and the dollar, and that’s great news for my gold price prediction…

The most significant action came early on Memorial Day. That’s when the U.S. Dollar Index (DXY) began another rally, this time to 94.50. But what happened next made me ecstatic.

Gold climbed along with the dollar, rather than falling against it.

That’s something I’ve been saying could happen. I’ll admit a few hours of that kind of action is no trend, but it’s certainly worth noting.

The price of gold rising in the face of a climbing dollar is a positive sign.

What Was Behind the Gold Price Rally Last Week

In the interim part of the week, gold was jostled back and forth.

New Tax Law Could Help 259 Million Americans Collect an Extra $4,920 a Month: The next “distribution” is only days away. So you need to act fast to stake your claim. Click here for details.

On Wednesday (May 23), U.S. Federal Reserve officials said the economic outlook would justify another rate hike “soon,” and that they’d be glad to see inflation overshoot 2%. That suggested tightening more aggressively would be unlikely.

Then on Thursday (May 26), the dollar dialed back as U.S. President Donald Trump nixed the planned summit with North Korea. The DXY traded back to 93.7, and gold popped suddenly to $1,305. 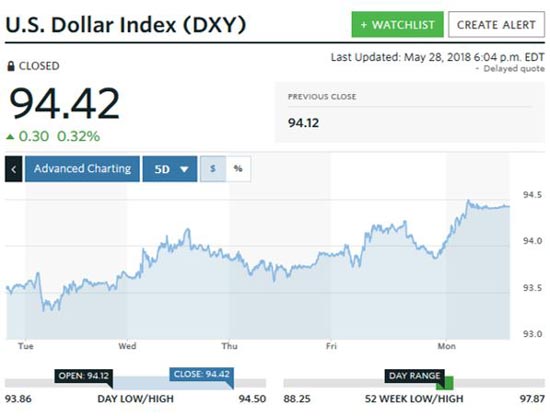 But like I outlined at the open, gold rose with the dollar on Memorial Day, even after selling off on Sunday evening to dip back below $1,300, closing the U.S. holiday at $1,297.

That’s a bullish sign for gold’s future, and I’ll show you exactly how high I think it can go…

What Last Week Means for My 2018 Gold Price Prediction

The DXY has now reached levels not seen since last December and, by all accounts, is looking overbought on both the RSI and MACD momentum indicators. 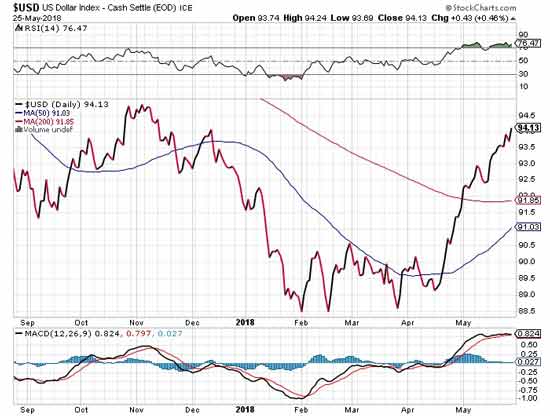 We can see that for nearly the whole month of May the RSI has been above 70, indicating overbought conditions. That suggests to me that, at least temporarily, the dollar is due to pull back from here.

Looking at the gold chart, despite the recent sell-off dragging gold back below its 200-day moving average and even below $1,300, it does seem to have found support near $1,285. 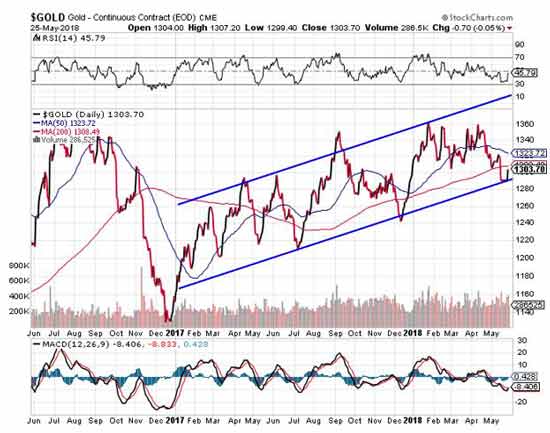 That’s the bottom of its rising trend channel. If the dollar were to sell off harder, and the DXY returned to near the 90 level, gold could reach back to the top of the channel, which would bring it close to the $1,400 range.

And that would do wonders for sentiment.

Meanwhile, the gold-stocks-to-gold ratio has just pulled back, suggesting momentum for gold equities has weakened. 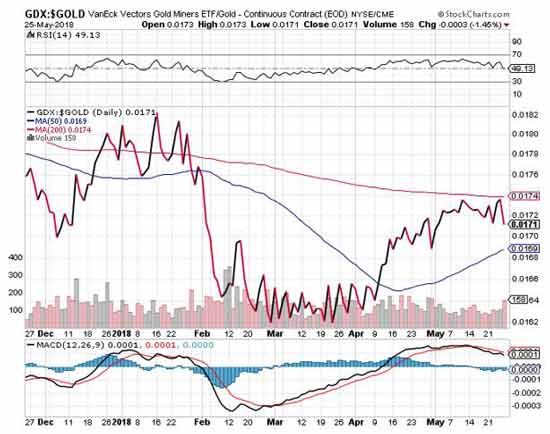 Still, we’re at a more favorable level than just two months ago, and the 50-day moving average is clearly trending higher.

As for the chart of gold stocks themselves, we’ve just seen a higher low since late March. 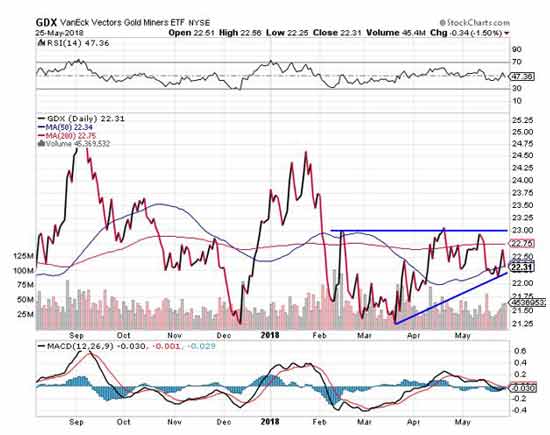 And they are forming a rising wedge, which suggests an eventual break to the upside.

The $23 level in the GDX has been resistance since mid-February, so we’ll need to get a clear push above that.

Overall, if we can get renewed weakness in the dollar, gold could run considerably higher than $1,400. But I think that either way, last week showed us the yellow metal can rise along with the dollar if that’s what lies ahead.

And for good reason – since the start of the year, the market has made virtually ZERO gains.

But he’s uncovered a new way to collect thousands of dollars each week – without having to deal with a single disappointing stock ever again.

The only way you’re going to get the chance to learn how to make enormous profits outside the world of stock investing is by clicking here now.