At its core, gold is two things: wealth preservation and financial insurance.

So when the head of the world’s biggest hedge fund recommends an allocation of 5% to 10% in gold, investors need to listen.

Another respected expert on the price of gold is Ray Dalio, founder and chief investment officer at Bridgewater Associates, the world’s largest hedge fund, with some $160 billion under management.

Dalio is great macro thinker who’s highly respected. His firm has averaged 13% annual returns since its founding in 1975. 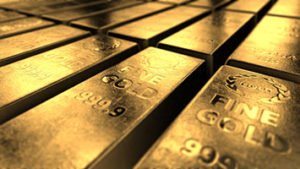 And then in October 2018, Dalio said that because there’s so much debt around the major currencies, stocks and bonds attached to that debt have become riskier.

He told The Economic Times gold is a diversifier, which should represent 5% to 10% of an investor’s portfolio. He even suggested to go higher as we move into the latter part of the business cycle.

There’s no denying that gold has languished so far this year, but that’s not a reason to sell. After all, you don’t cancel your home insurance just because your house hasn’t burned down.

As we head into 2019, we’ll be approaching the next recession and the end of the bull market in equities.

Volatility is likely to pick up along the way, and that should help propel gold to significantly higher levels.

There are multiple reasons why gold’s bull market is far from over, and why we’re likely see a sizeable advance in 2019.

Let’s look at each of these. Then I’ll tell give you my definitive gold price prediction for 2019…

Gold Has Become Even More Attractive As the Markets Look Riskier

With the current bull market nearing its 10-year anniversary, a recession is becoming likelier by the day.

November was one of the worst months for the markets since the last recession. Some $5 trillion in market cap was erased while the S&P 500 gave back 7%.

And now volatility has picked up dramatically, unlikely to diminish for some time. That’s good for gold, as investors see it as a reliable hedge.

Uncertainty continues to dominate headlines. Trump’s leadership style is unpredictable as he confronts political and economic issues. I expect he’ll continue to use the same strategies and tactics as he deals with internal politics (think Mueller investigation), trade, immigration, budgets, and geopolitics. And that should feed volatility along the way, making gold prices increasingly attractive.

The FOMC will continue to struggle with striking the right interest rate balance. That could bring an end to rate hikes earlier than originally expected.

Fed Chair Powell recently said “interest rates are still low by historical standards, and they remain just below the broad range of estimates of the level that would be neutral for the economy.” That was interpreted as more dovish than in early October, when he said interest rates were a long way from neutral.

According to Goldman Sachs Group’s Jeffrey Currie: “If U.S. growth slows down next year, as expected, gold would benefit from higher demand. The market has already priced in 10 out of the 12 rate hikes that we expect.”

At the same time, Brexit, along with Italy’s fiscal woes, is likely to continue dominating European headlines, with the occasional bout of national protest against rising taxes and cost of living. This will keep stability at bay.

Now that we’ve looked at the geopolitical factors that will move the price of gold in 2019, here’s another catalyst that could drive gold prices higher in 2019…

Signs of life are reappearing on the exploration side of gold mining. And that’s suggesting renewed interest by insiders as they envision higher gold prices ahead.

According to S&P Global Market Intelligence (SPGMI), exploration spending is about to tick higher in 2018, even though gold prices have languished.

Last year, $4.05 billion went to exploration, while SPGMI expects a nearly 20% increase for 2018, forecasting $4.86 billion to be spent, with gold benefiting the most.

Mergers and acquisitions have also experienced a sizeable uptick. Between January and July this year, the total reached $71.4 billion. Then something surprising happened. From August to October, the total was $85.7 billion, for an impressive $157.1 billion so far, and there’s still November and December to tack onto that amount.

Three jurisdictions that attracted nonferrous exploration were Canada, Australia, and the United States. Gold represented over 55% of the total exploration in each of those nations, according to SPGMI.

Australia’s mineral exploration hit a five-year high in the September quarter, according to trend data from the Australian Bureau of Statistics. Again, gold received the largest increase in exploration spending.

So as M&A and exploration both heat up, with gold the biggest beneficiary, we have yet another reason to expect gold prices to climb in 2019.

As I mentioned earlier, the Fed may end its rate hiking cycle earlier that originally expected.

But even if that’s not the case and we get four more hikes next year, that doesn’t have to be bad for gold.

You see, gold has managed some of its greatest multi-year gains while rates were heading higher.

So rates may rise significantly in 2019, but that isn’t necessarily going to be an impediment to higher gold prices.

Gold Prices in 2019 Will Depend on These Technical Indicators

Commercial traders use the futures market to hedge their gold positions. Typically, these are traders involved in the daily operations of gold mining and production.

Unlike speculators, commercial hedgers are widely considered to be the “smart money.” And their position at the extremes tend to be good indicators of either going short or long.

Well right now, commercial gold hedgers are near just such an extreme, being just barely net short. This suggests they feel gold is at or near its lows, with strong odds of rising from here.

This excellent chart from Sentiment Trader illustrates the overall position of gold hedgers over time.

Finally, here’s my exact gold price prediction for 2019, including my brand-new price target…

My Exact Gold Price Prediction for 2019

Another reason to expect higher gold prices next year is the prospect of “Peak Gold.”

Gold production worldwide appears to have plateaued. Meanwhile, India and China, the world’s two largest consumers of gold, are also enjoying among the fastest-growing incomes.

At the same time, central banks around the world have become voracious buyers in the last 11 years. 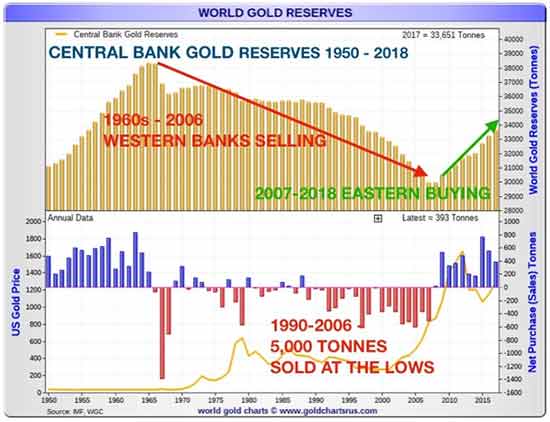 In fact, they’ve bought more every single year since then. China is a big buyer of gold. Many analysts give little credence to the official numbers on China’s Central Bank gold holdings, which are nearly flat since late 2016.

Despite importing large quantities, China is also the world’s largest producer of the precious metal. And all of its mining output remains in China.

So now that I’ve detailed several drivers supporting and likely to push gold higher in the next year, here’s where I think gold is going in 2019.

In my view, 2019 will be a breakout year for the king of metals. 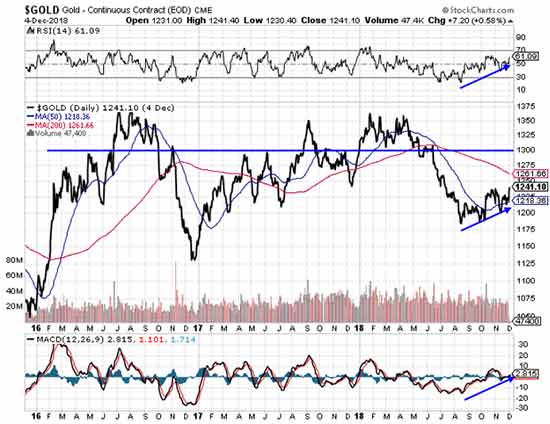 Firstly, we can see that since its August bottom, gold has started a new uptrend, establishing a series of higher lows. As well, the trend is being confirmed by the rising relative strength index (RSI) and moving average convergence divergence momentum indicators and the 50-day moving average line, which turned upward in November.

Surpassing $1,300 will be a significant level, especially since we can see that the gold price has met resistance several times at that price over the past three years or so. 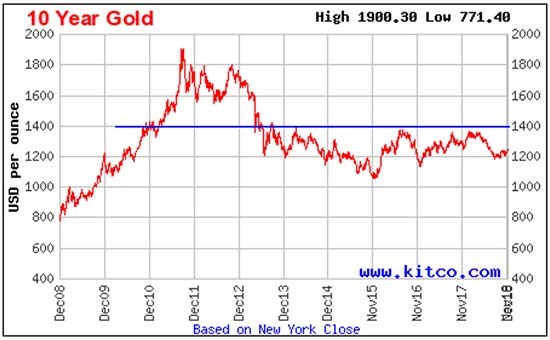 We can see from the chart above that $1,400 has remained a distinct level of overhead resistance.  The first time was in late 2010 and early 2011.

I think the current combination of gold’s early upward momentum, underpinning demand especially from emerging markets but increasingly also from the West, growing economic uncertainties globally and likely weakness in the U.S. dollar are all going to help push gold to $1,400 next year.