Is palladium really worth more than gold?

Well right now, the answer is emphatically yes. Not only that, it’s the best-performing metal of 2018 – by a long shot.

And the run for 2019 and beyond is shaping up to be even better.

Less than six months ago, palladium was under $900. Since that time, we’ve seen it rocket to $1,427 for the first time in history yesterday.

It’s given up just a fraction of those impressive gains, to sit above $1,377 per ounce, making it significantly more expensive than gold.

Palladium is now being priced at a $580 premium to platinum, a sister metal sometimes used as a substitute, with similar properties.

The precious metal has seen its price double in three years.

There’s no ceiling in sight here, and the profit potential is just too rich to pass up. Here’s what I suggest we do about that…

Why No One Can Live Without Palladium

Palladium is one of the platinum group metals. Its properties are the reason this metal is used mainly in industrial applications.

Automotive is by far the largest slice of the demand pie, representing three quarters of all consumption. 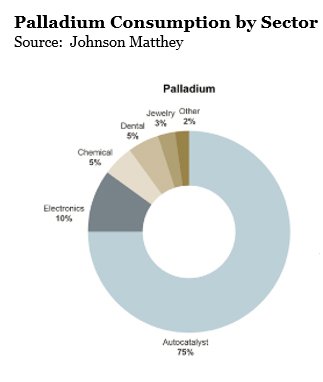 Other applications include electronics, as well as the chemical, dental, and jewelry sectors.

The main reason palladium is so important to the automobile industry has to do with the fact it is not only mainly inert, but also has a high melting point. That makes it difficult to replace.

Catalytic converters are a necessary part of cars, light trucks, SUVs, and even hybrids that run on gasoline-powered engines. That’s because these vehicles use catalytic converters to meet emissions control standards. Today, even most developing economies have laws forcing auto manufacturers to limit the pollution caused by their vehicles.

Platinum used to be the go-to metal for catalytic converters thanks to its stable characteristics at higher temperatures – and this despite being costlier.

That historically significant premium for platinum was motivation enough for car companies to research and develop catalytic converters which principally use palladium, given its historically much lower cost.

But shortages of the metal have led to the widening chasm in prices between the normally pricier platinum and the usually cheaper palladium.

This Metal Is in an Accelerating Supply Crunch

You see, switching to platinum for catalytic converters in gasoline engines would take at least 24 months, according to Anton Berlin, head of analysis and market development at Russia’s MMC Norilsk Nickel PJSC (OTC: NILSY), the world’s largest palladium and fourth-largest platinum producer.

Consider, too, that palladium is not only a relatively scarce metal, but also one whose production levels depend on other metals. That’s because palladium is rarely found in isolation, and instead is typically part of an orebody being mined for rhodium and platinum.

So palladium output tends to respond less to demand, since it’s a byproduct of other metals. And demand has risen considerably in the past few years as European consumers in particular have begun to favor gasoline engines over diesel, in part as a result of emissions test cheating scandals.

Russia is the wild card. It’s the largest producer of palladium. But official reserves of this precious metal are quite literally guarded as a state secret, and many observers opine that Russian stockpiles that existed for years have been sold off. 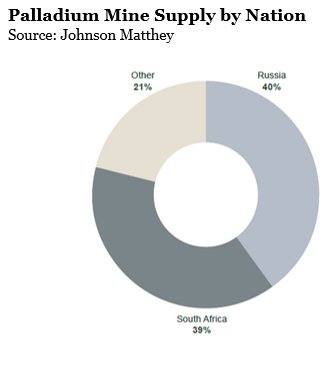 That marks the seventh consecutive year of shortages, and over 800,000 ounces of annual deficit in 2018. Even this major imbalance, along with soaring prices, hasn’t quite been enough to tempt miners to increase palladium output.

Given the bullish demand outlook, together with the metal’s inelastic supply profile, I expect palladium still has considerably higher to climb over the next 12-24 months.

Right now, futures traders’ palladium positions have considerable room to run higher before becoming overbought, though we could see a pause first.

What’s more, on a seasonal basis, palladium is in the midst of one of its strongest periods. Historically, the metal has tacked on good average gains between October and April.

That’s the bullish case for you, lock, stock, and barrel.

Now, here are two ways you can play this metal. One is safer and more conventional, while the other carries significantly more risk… and just as much potential for reward.

The first is the Aberdeen Standard Physical Palladium Shares ETF (NYSEArca: PALL). It’s backed by physical palladium, and the investment aims to reflect the performance of spot palladium prices, after accounting for management expenses at 0.6%.

PALL is a lower risk way to gain exposure to palladium prices.

Thanks to its shallow nature, this project could be exploited using a fully mechanised production process. This would likely contribute to one of the lowest operating costs in the sector.

PLG owns slightly more than 50% of Waterberg along with other experienced parties. The most recent resource update provides for about 26 million Measured and Indicated ounces of palladium, platinum, gold, and rhodium. Palladium makes up the bulk of these ounces, representing about 63%.

A Definitive Feasibility Study is expected in Q2 2019. The deposit shows room to grow with another 7 million Inferred ounces.

Keep in mind this will still take some time to advance toward production, and there’s no guarantee that will be the case. So this is a much higher risk play on palladium. But with palladium prices having risen so dramatically, Waterberg should eventually be highly profitable to operate.

It’s not often a precious metal’s price moves so dramatically relative to the other metals in its family.

This is one of those times, and it appears set to last long enough for handsome profits.

At our recent Bitcoin 20x Summit, we uncovered information that left many folks stunned – and re-evaluating everything they thought they knew about the crypto market.