Planet 13 is a cannabis company that operates primarily in Nevada. In addition, it owns a pair of dispensaries in California…

This week, I researched a cannabis stock several of you have asked about: Planet 13 Holdings Inc. (OTC: PLNHF).

Thanks to Vanya, Brent and Armando for asking us to take a look at this stock!

I’ll start with what Planet 13 does.

Planet 13 is a cannabis company that operates primarily in Nevada. In addition, it owns a pair of dispensaries in California.

Planet 13 owns just four total dispensaries, but its product is in about 33 stores in Nevada.

It operates what it calls “the world’s largest cannabis store” a few steps away from the Las Vegas Strip.

The company plans to open another “superstore” in Santa Ana, California.

The Planet 13 Cannabis Entertainment Complex won Leafly’s Nevada dispensary of the year in 2018, and it recently added non-cannabis products to its retail store: 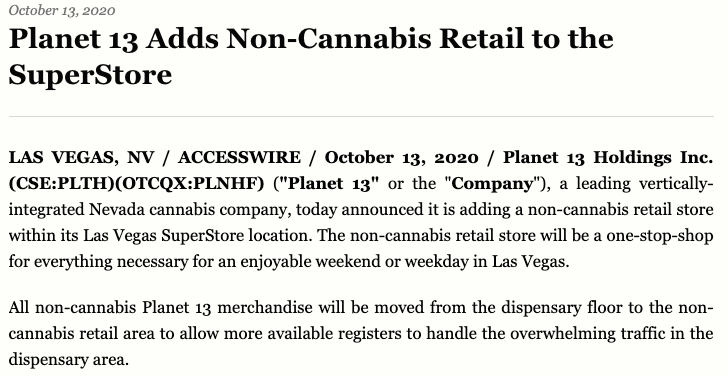 Planet 13 has several different brands under its umbrella:

Financially, the company seems to be in the midst of a record-breaking quarter.

Take a look at some of the highlights: 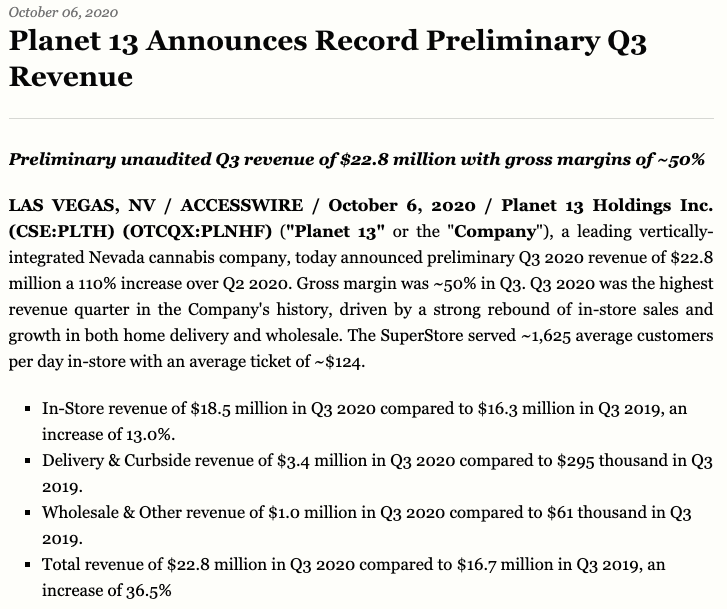 The preliminary sales figures suggest — barring any more lockdowns — that Planet 13 could reach $100 million in revenue during the fourth quarter.

Take a look at

← Aurora Cannabis vs. Canopy Growth: Which Stock is a Better Buy?
These 2 Pot Stocks Face a Challenging Future, Even if Biden Wins →