Although the solar energy sector is making strides with homeowners looking to cut their energy costs, solar stocks have been notoriously volatile.

They lagged the market for years until something changed for the better in 2017.

As the stock market often does, it waited until nobody was looking before offering up an explosive move higher. 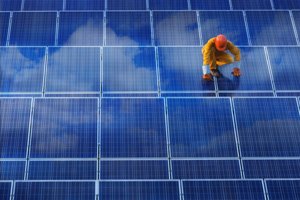 Nobody was looking in April of last year, and solar stocks very quietly started to recover. In fact, the Invesco Solar exchange-traded fund (NYSEArca: TAN) is up nearly 22% since then.

Exposed: Energy insider reveals most important financial event of the decade – or possibly of the century. Click here to learn about four potentially lucrative profit plays.

Bloomberg just reported that solar energy makes up 55% of all new energy generation, blowing past wind and natural gas for the second straight quarter. That’s even with the new tariffs in place.

Plus, this isn’t an anomaly. Germany just broke a national record, getting 85% of its energy from renewables during the May 1 weekend. That’s according to CleanTechnica, a global cleantech-focused website.

Solar energy is not just growing at astounding rates, it could make investors a pile of money if they know where to look. Solar’s growth potential is so great that investors can still get in early on this energy revolution…

While the potential for solar power generation has been around for several years, the marketplace was not quite ready. However, that has changed to give solar power tremendous potential:

That’s why investors can’t afford to wait. This is the best solar energy stock to buy right now…

JinkoSolar is a China-based solar company and the premier seller of photovoltaic cells and other solar products across the world.

Moors introduced it to readers last year, but the stock was hit earlier this year when the company priced a 3.6 million–share offering on Feb. 7, 2018. And the entire sector was slammed earlier this month when China imposed restrictions and cut subsidies.

But that merely put the shares on sale.

In fact, China’s solar industry is growing so rapidly its expansion can be seen from space.

You see, the recent reining in of the industry by the Chinese government was the result of capacity growing too quickly ahead of demand. But Jinko is just as sound now as it was last year, and demand will only grow.

China’s actions were intended to smooth out a temporary imbalance, as they said, to promote sustainable development, enhance its quality, and speed up its weaning off subsidies.

In the near term, China’s moves – and even the United States’ efforts to shore up coal and nuclear power – may have a dampening effect on solar. But in the longer term, solar’s ascension to the top of the energy generation ladder is inevitable, thanks to its lower costs and environmental benefits.

That makes now the best time to get into Jinko. The pundits only see the pessimism. The market looks forward to what is to come.

Ex-Intelligence Officer Reveals Conspiracy to Push Oil up to $100

Officially, he is here to strengthen military ties. But as Money Morning Global Energy Strategist and retired intelligence officer Dr. Kent Moors reveals in this urgent interview, Bin Salman’s real goal is to drive oil prices up to $100… before he IPOs the largest company in the world.

To see everything you need to know about this global oil conspiracy, click here.