Aramco, the world’s most profitable oil company, has Wall Street drooling over its potential $2 trillion valuation when it finally goes public. 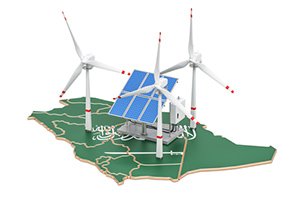 But what most investors don’t know is that Saudi Arabia plans to use that $2 trillion to fund developments in solar energy.

And you can profit well before the IPO…

Here’s what the Saudi government is really doing with the Aramco IPO, and how you can catch part of that windfall by investing in solar energy…

Mohammad bin Salman (MbS), the Saudi crown prince, shocked the world when he first announced that the government was weighing an IPO of the world’s biggest oil company.

But in reality, Saudi Arabia can’t live off of its massive oil wealth forever.

The Saudi government gets 87% of its revenue from the petroleum sector, primarily through the state-owned oil company. Aramco has unfettered access to Saudi Arabia’s 265 billion barrel reserves of oil, the second largest in the world.

But that oil will eventually run out, and the kingdom knows it.

Simply put, MbS has seen the writing on the wall. And as a young reformer, he’s taking the initiative to retool Saudi Arabia’s economy for a new age.

That explains his decision to sell off a 5% chunk of Aramco in what could be the world’s biggest public offering ever.

But that’s just the beginning of his plan…

MbS plans to fully transfer Aramco to Saudi Arabia’s sovereign wealth fund. That will help fulfil his goal of creating a $2 trillion fund – the largest in the world of its kind – that will be used to diversify the Saudi economy.

And because Saudi Arabia can’t exist on oil forever, the $2 trillion fund will be deployed on investing new forms of energy, especially solar power.

The best part is, you can get in on this $2 trillion windfall early if you know where to look – and we do…

How Aramco Is Creating a Solar Investing Windfall

Money Morning Global Energy Strategist Dr. Kent Moors is as much of an insider in the energy industry as you’ll find anywhere, and he’s all over the Saudi’s move into solar.

In fact, he recently sat down with Money Morning to tell us all about this historic event.

“This is one of the biggest and most unlikely energy mega-shifts we’ve ever seen,” Dr. Moors told us.

“Now, when I say the Saudis need to go solar, I truly mean it.”

And when Dr. Moors talks about the inner workings of the global energy industry, he knows what he’s talking about.

Dr. Moors is America’s leading authority on Aramco, and he’s been a high-paid consultant for OPEC, the IEA, 27 world governments, Fortune 500 companies, and many of the movers and shakers behind this IPO.

In other words, this is expert analysis you just can’t get anywhere else.

And Dr. Moors says Saudi Arabia isn’t just planning to invest in solar power; they have to.

“Simply put, MbS knows that the only way for his kingdom to remain a global power is to go solar. That’s why he has no choice but to put a big chunk of that Aramco IPO fortune towards making solar happen.”

You see, solar power is free, abundant, and produces no pollution. As the cost of the technology needed to harness it falls, its growth will be incredible.

“Think about it: In 2016, solar power was the fastest-growing source of energy in the world,” Dr. Moors said. “And in the coming years, the International Energy Agency believes renewables like solar will account for 40% of all the world’s power generation.”

That’s just part of what Dr. Moors had to say about the Aramco IPO and the solar investing windfall its creating.

To read his full interview and find out how to access his solar investing strategy, click here…