Renewable energy will inevitably displace fossil fuels one day. And while investors squabble over the best renewable energy stock to buy, we’ve already got one lined up because that day might be sooner than you think.

On Monday, April 22, a stunning 77% of the energy consumed by German households was produced by wind, solar, or biomass.

There were even a few hours during which renewable power output actually surpassed consumption. That meant renewables supplied 100% of Germany’s electrical power.

It’s a milestone few other nations, if any, can boast of reaching. Still, Germany presses on to meet its lofty goal of renewables accounting for 65% of its total energy portfolio by 2030. Europe’s biggest economy is working toward phasing out 50% of its coal-fired power plants by then as well. 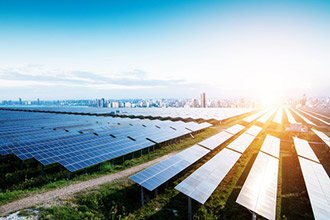 With Germany setting the example, clean energy policies are becoming central to state, federal, and even international federations.

Elections are being lost and won on this agenda as voters attribute increasing importance to the environment and renewable energy.

In the next four years alone, the International Energy Agency (IEA) expects renewables to reach 30% of global electricity demand.

It’s a freight train barreling forward. And right now, the best renewable stocks are primed to soar as demand rises. That’s why our pick is a must-buy…

A Global Perspective on Renewables

Between now and 2022, three countries will lead the way in renewable energy expansion.

Fully two-thirds of the growth will come from the United States, China, and India. 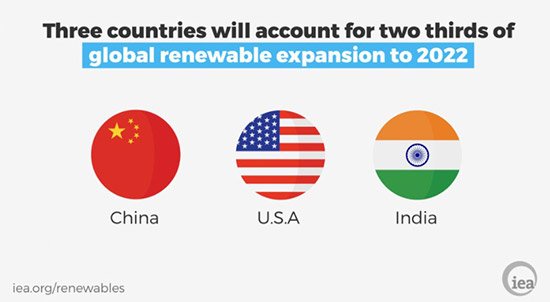 Reductions in costs and state support are fostering a favorable environment.

According to the IEA “Renewables 2017” report, solar will continue to be the “go to” renewable energy source, easily outpacing both wind and hydro.

Between 2017 and 2023, 70% of global electricity generation growth is expected to come from renewables.

Some jurisdictions are so intent on clean power generation that they’re legislating the requirement for 100% clean energy.

Washington State is the latest to join this small but growing club.

State Governor Jay Inslee, who’s running for president in 2020 on a platform of climate change, has advocated such a bill. And his state senate just approved it.

As a result, Washington State will have to fully run on clean energy by 2045, a target California, New Mexico, and Hawaii have already adopted. For its part, Puerto Rico aims to do the same by 2050.

Utilities already see the writing, so they’re migrating away from coal and natural gas, favoring hydropower, solar, and wind instead.

Voters just may be on board too, as environmental concerns take on an ever bigger share of relevant policy debates.

Major energy markets around the world, like the European Union, China, the United States, Brazil, and India are quickly ramping up their green power.

Many of these have signed on to lofty clean energy and carbon emissions reduction goals. Clearly, that’s leading to significant progress for renewable power.

As the chart below shows, about half the world’s population lives in places making a genuine push for renewable energy investment.

As you can see from the chart, solar power has the most room to expand. When you consider the IEA’s report that solar is the new go-to supply, it only makes sense to get into this explosive industry.

That’s why our pick for the best renewable energy stock is a $774 million, award-winning, international solar company with plenty of sunny days ahead.

This stock scores a perfect 4.75 on our proprietary Money Morning Stock VQScore™, which means it’s poised for a breakout in price.

The Best Renewable Energy Stock Under the Sun

According to Bloomberg New Energy Finance, solar power installations should grow by at least 14.7% this year over 2018. That means expanding from 109 gigawatts (GW) of output to 125 GW or more.

JinkoSolar Holding Co. Ltd. (NYSE: JKS) is a $774 million company headquartered in China. With over 12,000 employees worldwide, the company has six production facilities, which produce solar power solutions across the globe.

In order to serve clients in every corner, Jinko has subsidiaries and global sales teams spread across 35 countries including Japan, Germany, Italy, Switzerland, Australia, the United States, and United Arab Emirates.

The company plans to elevate the majority of its cell capacity to PERC technology. I’ll spare you the boring technical details – just know that this approach allows manufacturers to reach higher efficiencies than standard solar cells. Despite additional steps in manufacturing, efficiency improvements allow for overall cost reductions.

Admittedly, JKS shares had a tough 2018 as China cut incentives for solar power. Nonetheless, much of that decline should be reversed this year. A focus on global sales has helped ease some 2018 softening of Chinese sales.

The company recently won the 5th All Quality Matters Award for PV Module Energy Yield Simulation. The award is handed out by TUV Rheinland, a highly respected German quality and standards testing institution.

With a trailing P/E of just 15.4 and a forward P/E of only 9.6, there’s plenty of room for expanding that multiple.

As the renewable energy space heats up, the solar subsector in particular will rise along with it.

And being the largest solar manufacturer in the world, JinkoSolar is sure to be at the forefront of investors’ minds.

← The Tesla Stock Price Is Down 38%, but We’re Still Bullish on Electric Vehicle Stocks
Turn Iran Sanctions into Profits with This Backdoor Play →