The Bitcoin hash rate – the amount of computing power used by the Bitcoin miners to generate new coins and secure the network – has been climbing rapidly this year.

Since June 14, the Bitcoin hash rate is up 60%. And it’s nearly the double the rate of a year ago, when the hash rate hit its previous peak. 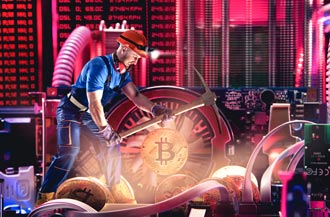 Bitcoin miners are working harder than ever. So what?

It’s one of the strongest signals yet that price of Bitcoin is set to skyrocket within the next year to 18 months.

The miners don’t do what they do out of a sense of benevolence. Bitcoin mining is an expensive proposition.

The mining equipment, known as application-specific integrated circuits (ASICs), cost thousands of dollars each and are always being improved. And large mining operations buy these in bulk. So they need to spend tens of thousands – and often hundreds of thousands – of dollars on equipment at regular intervals.

Easier Than Trading Crypto: You have to be your own expert to make money trading crypto. But in the “conventional” markets, all you need are the secrets of America’s No. 1 Pattern Trader, Tom Gentile. Get access for only $1…

The miners do all this for a chance to earn a “block reward” – a set amount of bitcoins awarded to the miner that “solves” a particular block. The current rate is 12.5 bitcoins per block.

Each miner wants as much hash power as possible. More hash power earns you more bitcoins.

When the Bitcoin price rose from $4,000 in March to over $12,000 in July, it incentivized the miners to invest in newer, more powerful ASICs in a bid to earn more bitcoins and thus more profit.

The Bitcoin hash rate started rising sharply in June, as it takes a few months for the miners to obtain and deploy new mining rigs.

So even as the Bitcoin price hovered around the $10,000 level in recent months, the hash rate did not level off. The miners were undeterred.

This week there was a sudden 30% drop in the hash rate followed by a steep drop in the price of Bitcoin. But the hash rate bounced back close to previous levels within 48 hours. And the Bitcoin price drop appears unrelated.

In any case, the Bitcoin hash rate tends to fluctuate a lot over short time intervals. What matters is the long-term trend…

Why the Bitcoin Hash Rate Will Keep Rising

Over the past few months, the Bitcoin hash rate appeared to be accelerating even as the price was trading in a narrow range.

Demand for new mining equipment is as high as ever. According to Coindesk, the major ASIC manufacturers have sold out equipment for delivery through the end of the year. Miners are now placing preorders three months in advance.

When they order new equipment, the miners need to have confidence they’ll earn enough in Bitcoin rewards to cover the cost in a reasonable time (after that, the rewards are mostly profit).

And a Bitcoin wild card just might explain why the miners are so eager to snap up and deploy new equipment.

Next May, the Bitcoin reward will be halved from 12.5 bitcoins to 6.25 bitcoins. That means the mining rewards (and the supply of new bitcoins) will also be halved.

With rewards set to shrink, the Bitcoin price will need to rise steeply over the next six to 12 months for the miners’ vast investment in equipment to pay off.

The off-the-charts demand for ASICs now tells me the Bitcoin miners expect just such a rally.

And history says they would be right…

How Halving Events Have Pushed the Bitcoin Price Higher

We’ve had two previous reward “halving events.” Each precipitated a massive rally in the price of Bitcoin.

Many crypto analysts have predicted a major rally that will take the Bitcoin price to $50,000 or $100,000 over the next year or so.

But the Bitcoin miners have put real money on it. Collectively, they’ve bet millions of dollars on the likelihood of a major rally as they stockpile ASICs.

I wouldn’t bet against them.

You’ve heard the stories of “Bitcoin millionaires” – people who snapped up Bitcoin in its early years at absurdly low prices. Depending on when they got in, these folks could have purchased Bitcoin for as low as $200, $50, $10, $1, or, for the earliest investors, just pennies.

But the lesson is universal: The earlier you get in on an investment with great potential, the more likely it is you can enjoy a windfall.

The same goes for startup companies. Angel investors – those who get in on the ground floor, before a company goes public – historically have had the opportunity to land much larger gains than “regular” folks who had to wait for the initial public offering…

But now, regular investors like you do have that opportunity.

← Forget Aurora Cannabis, This Is a Better Marijuana Stock
The Best Way to Play “the Richest and Most Dynamic Marijuana Market in the Country” →