Market noise is never-ending – as are worries over and questions about the market.

What to buy? What to sell? What to hold? What will the Fed do? Where are markets headed? When will the next recession hit? Why? Why?

What should I do?

In this increasingly volatile market, nervous investors still look to prompt-reading advisors and pundits who work within the safe and stupefied confines of mainstream consensus.

Market timers and market predictors, too, are everywhere; they always have been and always will be. Some are bulls; some are bears.

Investors are seeking answers – and instant, calming solutions. These “experts” and “systems” are offering just that – most of which is the same.

“Markets rise and fall,” the experts say as a chorus, “just be diversified – hold stocks and bonds – and carry on. The economy is strong, employment is high, inflation is low, and the markets will stay the steady course over time.”

This all may feel and sound comforting, but so does dope. Their advice might seem to “make good sense,” but the data (i.e. objective facts) as to the economy, employment, inflation, and the strength of stocks and bonds suggest otherwise.

So we need simple, blunt guidance. And we need to know how to protect ourselves.

Fortunately, the answer is right in front of us, which is to say, right behind us.

Here’s the Only Way This Fake Boom Can End

History, and not tarot cards and market timers, hold the answer to where the markets and your hard-fought wealth are going. And if you cut through all the noise, yield curves, derivatives math, political headlines, fancy market jargon, expert testimony, and Fed-speak, this history is actually quite simple.

In fact, the entire history of economic cycles and busts, from 1st century Athens to 18th century France to the Great Depression of 1929 to the Great Recession of 2008 simply boils down to this…

YOU KNOW IT IN YOUR GUT: Look at how things are going. Financial turmoil is coming just around the corner, maybe just a few months away. Click here…

Every market crisis is preceded by a debt crisis and “solved” by a currency devaluation. Every one. Every time. Period.

And guess what? With debt levels at $244 trillion globally and $71 trillion here in the United States, the world in general – and the U.S. in particular – has never been deeper in debt, nor faced a more profound debt crisis.

Think about those numbers: In essence, they are the two most useful predictors for understanding where we are today and where we are headed tomorrow.

In the wake of the 2008 crisis, the Fed took interest rates to ultra-low, basement levels, throwing open the credit spigots and fueling a credit expansion across all sectors, public and private.

This expansion is the fattest and fastest in the history of money.

It’s also the most dangerous.

As for such “debaucherous” debt bubbles, they “pop” when the cost of carrying that debaucherously high debt gets too painful.

And because this pain level rises in tandem with rising interest rates, everything hinges upon rising rates.

You see, the United States is in debt like never before, and yet because rates are still low, we, as a country, have been able to get away with deficits (i.e. a credit card “recovery”) with no ill effect for decades.

Such debt-driven peace of mind has convinced many that the United States can run forever with what Jacques Rueff described as “deficits without tears.” 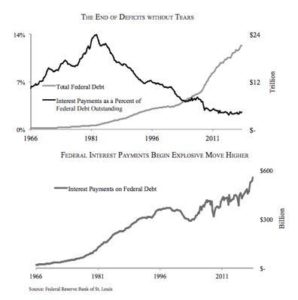 And as the chart to the left clearly shows, we can run massive deficits (grey line) without “tears” simply because interest rates (black line) have been artificially stapled to the floor, since the mid-1980s in general and 2008 in particular.

Stated otherwise: Falling interest rates (artificially suppressed by the Fed) have made debt relatively easier to carry – at least for a while…

But here’s the rub: Rates are rising due to market pressure (rather than Fed “control”) and the cost of that debt (i.e. the “interest expense”) is edging higher, like you see at the left.

This means everyone from Joe Six-Pack to the U.S. government is about to face increased – dare I say “tearful” – debt expenses.

Uncle Sam’s deficit spending is increasing at an annual rate of $1.2 trillion. How is this rising debt expense ever going to be paid?

Who, or what, will come riding… flying… swooping… sneaking… to his rescue when he can no longer afford the interest payments?

Will it come from tax revenue in an era of poorly timed tax cuts? Can we expect bailouts from a broke European Union? Maybe broke and belligerent China? Or how about an even more broke Japan?

The short answer is this: Not a snowball’s chance in hell…

Instead, most of us by now already know what will happen…

What will happen when we can no longer afford to keep the lights on?

History confirms the very simple answer: The United States will devalue its currency to solve its debt problem. That means the Fed will once again start printing money out of thin air. And again it will refer to the exercise euphemistically as “quantitative easing” – i.e., “faking it.”

How can we be so sure? Because as history again confirms, the United States in general, and the Fed in particular, literally has no choice.

If they don’t print more magical money, there will be no new “credit card” money to continue supporting an already artificially supported bond market. This means bond prices will fall and thus bond yields (and the interest rates they, not the Fed, push) will naturally and mathematically rise.

Learn How to Trade Like the Pros: Tom Gentile just recorded all of his most lucrative trading income secrets in America’s No. 1 Pattern Trader Cash Course. This could set you up for life – and it’ll only cost you $1…

This subsequent rise in interest rates and interest expenses on debt, in the public and private sectors, will be fatal. It will create a market catastrophe in what are already catastrophically overvalued, debt-driven U.S. securities markets.

After all, rising rates create tipping points in which debt-laden companies need to dip into their earnings – earnings which have already been distorted by debt-driven stock buybacks and ex-items accounting scams – to pay their rising debt costs.

This hit on earnings, of course, results in falling stock prices. After all, what is a stock but a claim on future earnings? 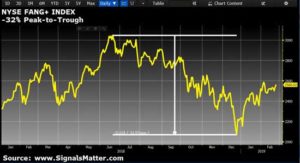 Our completely broken and overlooked bond market is even more of a distorted danger zone for otherwise unwitting investors. The most obvious symptom of this distorted credit bubble is the so-called “high yield” bond market, which is in fact, a low-yield minefield.

High-yield issuers, for example, recently saw their first bond issuance after one of the longest dry spells (40-plus days) since 1995.

For these junky companies that perpetually need more borrowed money (by issuing bonds) to pay back their maturing and perpetually “rolling” debts, they face a tearful problem. Namely, the new interest rate they have to pay today is 6.5% – to cover yesterday’s debts pegged at 4.125%.

As interest rates continue to rise in the face of a cornered Fed and mushrooming Treasury supply – over $1 trillion worth of “IOUs” per year – just to pay for our public debt rollover, these tears will turn into sobbing fits.

That is, at some point soon (one we are tracking carefully), the bubble in U.S. stocks and bonds will do what all bubbles throughout history have always done, namely: “POP!”

And at that moment, unless the Fed starts printing more money (and I mean fast and furiously) Fed-supported bond prices will tumble further, rates will rise further, and the next market crash will make 2008 seem benign in comparison.

Why? Because today’s debt crisis – which includes everything from real estate, corporate bonds, student debt, government deficits, and car loans – is far worse than just the sub-prime mortgage crisis of 2008.

So, there we have it folks. Our debt-soaked, artificially supported securities market is facing an inevitable and interest rate–driven “uh-oh” moment.

Sadly, the only tool the Fed has left in its toolbox to slow this debt slide is the totally unconstitutional power to print money.

But is this really a solution? Is it good news? Comforting news? Calming news?

In fact, the Fed is now stuck between a rock and hard place – a dilemma of its own creation. The Fed gets to choose between a natural market catastrophe… or the catastrophic inflation of currency deflation via unnatural Fed money printing.

Given that every iteration of the Fed since Alan Greenspan serves Wall Street masters rather than natural market cycles, it’s not hard to guess what the Fed will eventually do…

It will print dollars and rot out an already-weakening U.S. currency. Yes, that’s the same currency you take home for pay and that you use to provide for your family and future, just rotting away.

At that point, the smart move is to do what forward-thinking, protection-minded investors have done since the beginning of time.

I mean silver and gold, of course.

Meanwhile, the purchasing power of gold, as measured in U.S. dollars, has a far better historical, as well as graphical…track record.

One does not need to be a “gold bug” or precious metals peddler to see this. I’m certainly not of that stripe.

Gold and silver are volatile movers – as are the SPDR Gold Trust ETF (NYSEArca: GLD) and Sprott Physical Gold Trust ETV (NYSEArca: PHYS) vehicles. Both the physical metal and the exchange-traded products likely will continue to rise and fall in the coming months and seasons, as headlines replace truth and sales-spin ignores common sense.

But if you invest for the long term with a respect for history, that volatility won’t bother you a bit. And the security will help you sleep better.

Owning a smart allocation of these metals – the Swiss, for example, typically hold a 10% allocation in gold as “insurance” – makes far, far more sense than anything we’ve seen coming out of D.C. or Wall Street since 2008.

Be careful out there.