In fact, we’ve been telling Money Morning readers about the incredible profit power of the renewable energy sector for years.

Or the possible $2 trillion windfall spilling out of the biggest IPO ever.

And we’ve of course shown you the 700% growth  we’re expecting from China’s solar energy market.

But this chart shows just how drastically China’s renewable industry is growing, as well as just how much money you could make by investing in it… 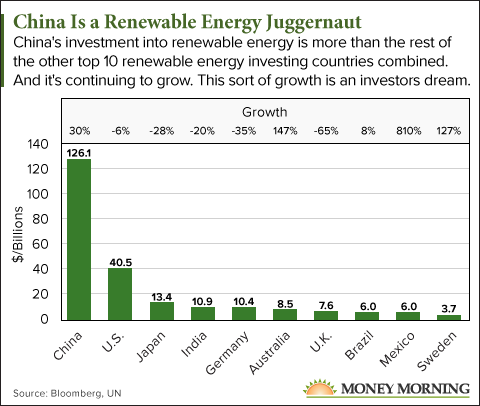 You see, China’s renewable energy growth isn’t an accident. The Chinese government is making a herculean effort to boost the country’s renewable sector to power its nearly insatiable demand for electricity.

That capped off an absurd year of growth. In 2016, China committed to producing 105 gigawatts of solar energy by 2020. That would’ve required an annual growth rate of 45%. China smashed that goal in 2017, producing 112 gigawatts.

In fact, China’s solar industry is growing so rapidly, its expansion can be seen from space.

And as the chart shows, the country isn’t slowing down.

China plans to spend $360 billion on renewable energy by 2020. That money will go to cutting-edge projects like a new, record-breaking floating solar farm and a $151 million solar-powered plant that could power nearly 100,000 homes.

But the most important aspect is what this all means for your money.

Because China’s plans are so ambitious, you can still get in early on this solar revolution.

One of the best ways to play it is by owning the top Chinese solar stock, Jinko Solar Holding Company Ltd. (NYSE: JKS).

“With global operations and good relations with the Chinese government, Jinko is perfectly positioned to continue growing.”

While Jinko is a great stock, there’s no reason to stop there.

Dr. Moors is as much of an insider in the energy industry as you’ll find anywhere.

And when Dr. Moors talks about the inner workings of the global energy industry, he knows what he’s talking about.

He’s been a high-paid consultant for OPEC, the IEA, 27 world governments, Fortune 500 companies, and many of the movers and shakers behind the energy industry worldwide.

He also knows the power of investing in solar industry.

“Think about it: In 2016, solar power was the fastest-growing source of energy in the world,” Dr. Moors said. “And in the coming years, the International Energy Agency believes renewables like solar will account for 40% of all the world’s power generation.”

That’s an incredible amount of growth coming to this industry, and you can find out exactly how to play it straight from Dr. Moors himself. Just click here to see how you can gain access to his invaluable insight…

← Here’s How America’s ‘Baby Boomers’ Get Their Weed
Will Oil Skyrocket Because Trump Has Ended the Iran Deal? →