The next government shutdown could be just days away, and the stakes are higher than ever.

But the mainstream media simply isn’t taking it seriously. 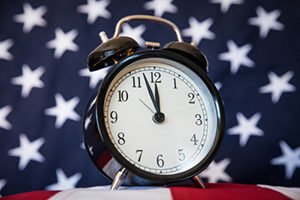 You might not be either. After all, it’s starting to feel like government shutdowns are becoming an annual tradition in the United States.

This time is different.

This time, a $6 trillion time bomb is ticking down to its last seconds, and a government shutdown is only going to speed it up…

Why the Government Will Shut Down and Why It Matters

The government will run out of money on Sept. 30 if Congress doesn’t pass a new spending bill in time.

We’ve seen this act play out before.

Trump wants Congress to fund a new wall on the border between the United States and Mexico, and he says he won’t sign any new spending bill without funding for the wall included.That’s what’s happening right now, except this time U.S. President Donald Trump is throwing a wrench into the machine.

“If [a shutdown] happens, it happens. If it’s about border security, I’m willing to do anything,” Trump told Republicans earlier this month.

But the Senate has already passed a new spending measure that doesn’t include wall funding, and CBS News reports it’s likely to pass in the House of Representatives too.

That means if Trump is serious about using this as leverage to get the wall funded, he’ll have to veto the bill. And Congress is unlikely to pass a new version in time to stave off a new government shutdown.

Once the government runs out of money, the Treasury department will have to get creative with how it manages what cash it has left. That means prioritizing which payments get made and cutting back on government staff and other expenses.

But with interest payments, Medicare, Social Security, and the military – more than half of the government’s outlays each year – there just isn’t very much wiggle room.

Plus, government shutdowns have historically sent the stock market tumbling. The Dow fell 10% during the 2011 shutdown and fell 6% in during the 2015 fight.

Your Independent How-To Guide: Planting the Seed of Prosperity During an Economic Crisis

And the stakes are even higher this year.

We are facing a massive, $6 trillion pension deficit, and the bill is coming due by Oct. 31…

That’s five times the size of President Trump’s spending plan for all of 2018: 500% greater than the entire federal budget, including Defense, Social Security, entitlements – the whole shebang.

But it’s not enough.

Now, there’s no more delaying it. They’re running out of money fast. It’s finally time for these horribly managed pension funds to pay the piper.

But when these U.S. funds go broke between now and Oct. 31, they will trigger the beginning of the most severe financial crisis any of us has ever seen…

This crisis doesn’t just mean your pension is at stake.

It will affect you even if you aren’t one of the 23% of Americans with a pension plan.

This is a catastrophe that could bring the U.S. economy to its knees and make the Great Recession seem like a day at the beach.

But you don’t have to be a victim of Washington’s big lie.